"Your Journey Is About What You Leave Behind" 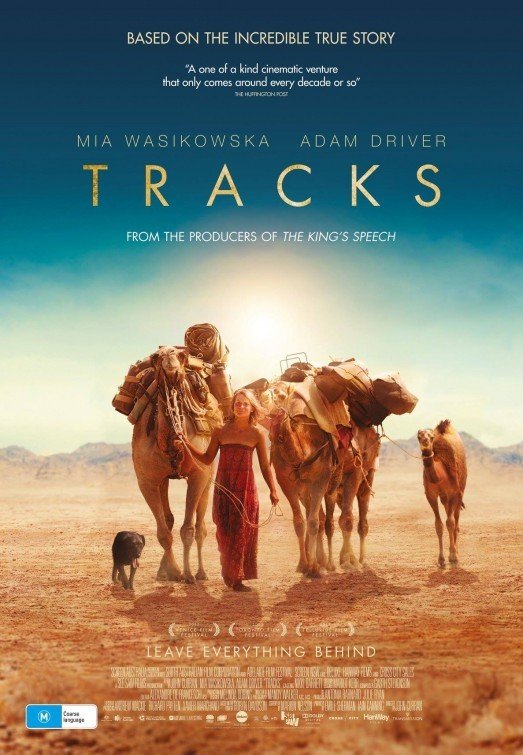 TRACKS is a biopic about Robyn Davidson, a young woman who decided in 1977 she wanted to trek across the desert of Australia 1,700 miles to the Indian Ocean. Along the way, Robyn’s accompanied by her dog Diggity, four camels and the magazine photographer who’s photographing parts of her journey, much to Robyn’s disdain. During her journey, Robyn meets a variety of characters as she deals with her personal struggles, her memories and her encounter with the natural beauty and rugged environment around her.

TRACKS is a compelling movie with some beautiful panoramas of the Australian landscape. There is some change in Robyn’s character in that she becomes more tolerable of the photographer. Much of the story’s intrigue comes from the people she meets, her personal struggles and the rugged beauty around her. There’s a light moral worldview portrayed overall by Robyn, who shows care and respect for animals and, sometimes, other people on her journey. However, strong or extreme caution is advised for TRACKS due to brief lewd content, an “f” word, and some light Romantic, feminist, pagan content.

(B, Ro, Fe, Pa, L, V, S, NN, A, D, M) Light moral worldview overall in the female protagonist’s character, who shows care and respect for animals and sometimes other people on her journey across Australia, mixed with some brief Romantic, feminist elements and some pagan religion referenced by Aborigines the protagonist occasionally encounters on her trek; one strong obscenity (the “f” word); Robyn shoots bull camels charging toward her own camels, a dog is shot, camel castration scene, suicide is discussed, some images of dead animals; implied fornication and references to camel sex; partial side view of upper female nudity, but from a far distance, in one scene; brief alcohol use; brief smoking; and, lies, deception, adult themes discussed, family dysfunction, suicide is discussed.

TRACKS is a biopic into the journey of Robyn Davidson (Mia Wasikowska) who in 1977 decided she wanted to trek across the desert of Australia 1,700 miles to the Indian Ocean. Along the way, she’s accompanied by her dog Diggity, four camels, and Rick (Adam Driver), the magazine photographer photo journaling her journey, much to her disdain. Robyn meets a variety of characters, as well as deals with her personal struggles and her memories.

She’d rather travel the journey completely alone with only her animals, but her loved ones insist Rick meets her at checkpoints for photos. As Robyn starts on her trek, she’s full of energy and optimism. She thinks of her travel as “just a series of steps” and that she’s finally on her own at last, away from rules and everyone else’s expectations.

In TRACKS, Robyn is met with setbacks and dangers including a sandstorm early in the trip where she first hollers at Rick for his presence and annoying picture-taking. Then she makes advances toward Rick and kisses him, and sex is implied between them. The morning after Rick’s sexual experience with Robyn, he’s ready to commit to being on the journey with her more, but she refuses. She seems indifferent almost as if nothing happened, and they agree to meet at the next checkpoint. One of the dangerous moments in the movie occurs when camel bulls begin to charge toward Robyn and her camels. She was told if she was ever in such a situation, don’t think, just shoot.

Rick is timely and meets Robyn in TRACKS at the next checkpoint. There, a ranger and preservationist of the culture and customs of the native Aborigines allows her and Rick shelter for a brief rest. The only request by the ranger and Robyn was for no pictures to be taken. When Rick doesn’t honor this request and takes photos of a sacred ceremony, Robyn is denied an elder guide to lead her through a sacred territory. Because of this breach in trust, Robyn must travel without an elder the long way around an additional 160 miles. However, as Robyn begins to walk Day 84 of her route, Eddy, another Aboriginal elder guide, takes pity on her and sees her through the sacred territory. Robyn and Eddy bond, although they don’t speak the same language. So, Robyn misses Eddy’s company and wise ways when it’s time for them to part. With a large portion of the journey ahead, Robyn pushes on with no idea of what she might face.

TRACKS is a compelling, interesting movie, with some beautiful panoramic views of the landscape she must cross. There are some changes in Robyn’s character by the end in that she becomes more tolerable of Rick’s company. However, much of the story’s intrigue comes from the people she meets, her handling of the camels, per personal memories, and her encounter with the natural beauty and rugged environment around her. In making her trek, Robyn wants to leave civilization behind and just be alone, but the movie shows that’s not always possible. In the end, however, it is indeed her encounter with just herself and the natural environment that ultimately comes into play.

TRACKS has a light moral worldview portrayed in Robyn’s character, who shows care and respect for animals and, at times, other people on her journey. That said, a strong or even extreme caution is advised for TRACKS due to an implied sex scene, partial nudity in one scene, an “f” word, and some brief Romantic, feminist, pagan references.