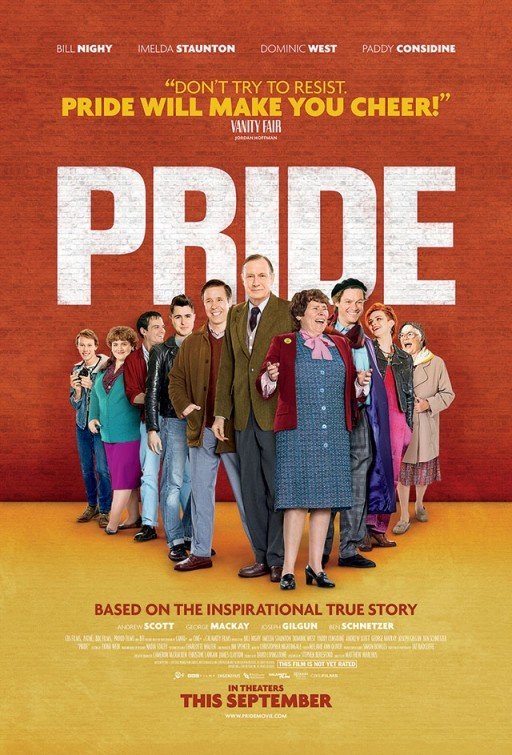 PRIDE is a British movie based on a true story about a group of homosexual activists in 1984 London helping miners in a small town in Wales during a national strike. The local union leader, who’s viewed as a quote “tolerant” unquote man, brings the homosexuals to town. Most of the miners, especially the men, reject the homosexuals. Eventually, however, all but a few of the townspeople welcome them. Together, the miners and the homosexuals survive the strike. Then, the entire mineworkers union helps the homosexual community gain acceptance by the whole Labour Party, Britain’s radical leftist political party.

PRIDE is well crafted, entertaining propaganda, but it’s still propaganda. Thus, like other propagandistic movies, it demonizes the opponents of the homosexual agenda and radical pro-union politics. In fact, its depiction of both the proponents and the opponents, and their arguments for their positions, is rather shallow. PRIDE also contains lots of strong foul language as well as allusions to sadomasochistic forms of the homosexual lifestyle. Thus, PRIDE is not only abhorrent propaganda politically. It’s also obscene propaganda morally. Don’t be fooled by PRIDE!

(RoRoRo, PCPCPC, HoHoHo, CoCo, AbAb, LLL, V, SS, N, AA, D, MM) Very strong Romantic, politically correct, homosexual, pro-union worldview about left-wing, anti-conservative homosexual activists helping the British mineworkers union during the controversial mining strike that took place during Margaret Thatcher’s conservative Tory administration in Great Britain including activists saying “F Thatcher,” plus some overt communist ideology includes a quote form Karl Marx’s infamous “Communist Manifesto” pamphlet on a union banner and an anti-biblical undertone, especially when one pro-union leftist says there are other cultural aphorisms or moral lessons to use other than the apparently “old-fashioned,” typical ones they always hear from the Bible, but movie generally leaves the religious issues regarding homosexuality out of its viewpoint; about 36 obscenities (including many “f” and “h” words and some “s” words), 10 strong profanities using Jesus, 12 light profanities such as OMG, several uses of “bloody,” and one person says, “So help me, God!”; some light violence such as brief fighting; strong sexual content and immorality condemned by both God and Jesus in the Bible includes depicted homosexual behavior such as men kissing men, women kissing women, some lewd talk, men dressed as women, visual allusions to homosexual sado-masochism in homosexual outfits worn, brief dirty dancing, and homosexual behavior is seen as a lark, a positive thing and/or no big deal; upper male nudity; alcohol use and light drunkenness; smoking; and, bullying but rebuked, father disowns son who finally comes out as homosexual and this is seen as extremely bad, insults, radical pro-union activity is validated.

PRIDE is a British movie based on a true story about a group of homosexual activists in London who win friends and greatly influence British politics by supporting the Welsh miners who went on strike during the term of conservative Prime Minister Margaret Thatcher in the 1980s. It’s basically a left-wing propaganda drama that actually reveals the connection between today’s homosexual activism and ungodly communist ideology.

The movie opens in Summer, 1984. The mineworkers union in Great Britain has decided to go on strike, and conservative Prime Minister Margaret Thatcher refuses to give into their demands. A leftist homosexual activist in London decides to start a “gay” and lesbian group raising money for union members in a tiny mining village in Wales, who need money and food to continue their strike. At first, the little union office in the town refuses their help, but when the union leader gets wind of the offer, he accepts the money and food. This causes some controversy among the other miners in town, but the homosexuals go to the town to show the members they are truly sincere. Sure enough, all but a few of the miners change their attitudes toward the homosexuals and their lifestyle. In fact, both groups find that they share many sociopolitical values. Eventually, the entire mineworkers union becomes a big supporter of the homosexual agenda in the Labour Party, which changes its platform regarding civil rights to accommodate the nation’s homosexual activists and their radical Anti-Christian, non-biblical agenda.

PRIDE is well crafted, entertaining propaganda, but it’s still propaganda. Thus, like other propagandistic movies, it demonizes the opponents of the homosexual agenda and radical pro-union politics. Except for one scene, however, it avoids trying to smear traditional Christian, biblical faith regarding homosexual sin. It just doesn’t deal with it. That said, it clearly demonizes Margaret Thatcher, one of the greatest prime ministers Britain ever had. In doing this, it conveniently avoids mentioning any of the opposition’s arguments against the union’s strike. Its depiction of the moral issues regarding homosexuality is also rather shallow. Thus, the people and parents who oppose the homosexuality expressed in the movie are just seen as some kind of tyrannical prudes. In fact, except perhaps for the deadly AIDS epidemic and the alleged oppression homosexuals supposedly “suffer,” the movie also makes the homosexual lifestyle itself look somewhat shallow. For example, a visit to a sado-masochistic homosexual bar by the homosexual activists and their new union friends is portrayed as just a lark.

Ultimately, the movie’s acceptance of strong foul language, union thuggery and sadomasochistic homosexuality shows that PRIDE is not only an obnoxious piece of homosexual humbug and leftist, pro-union propaganda. It’s also an obscene lump of pretentious vulgarity. Don’t be fooled or corrupted by PRIDE!

It’s interesting to also note that one of the union’s political banners near the end proudly displays an allusion to the popularization of an infamous quote from communist co-founder Karl Marx’s “Communist Manifesto” pamphlet, “Workers of the world, unite! You have nothing to lose but your chains!” This shows that communists have indeed infiltrated the union movement in Great Britain. In the U.S. they infiltrated the unions in the 1930s, were rebuffed in the 1950s and 1980s, but are seeing a resurgence in the 21st Century under Pres. Obama and his union supporters.