AS DREAMERS DO: THE AMAZING LIFE OF WALT DISNEY

"Never Let Anything Stop You from Pursuing Your God-Given Dreams" 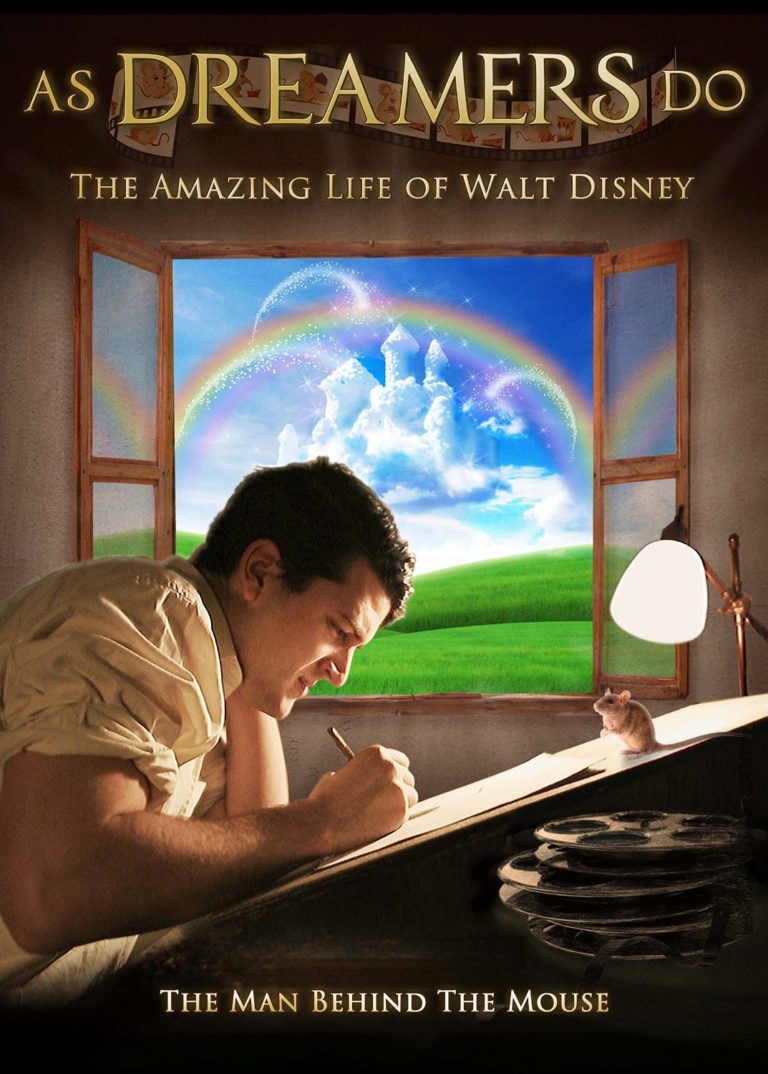 AS DREAMERS DO: THE AMAZING LIFE OF WALT DISNEY is a biography about Walt Disney’s life and obstacles before moving to California and finding success in the entertainment industry. Walt is greatly inspired by his farm and small hometown and draws everything and everybody to hone his skills. Many people and animals in his life become the inspiration for his stories. As a young man, Walt makes many attempts to grow his own business from the ground up in Kansas City. He also has many hungry nights, debt and failed efforts. Finally, Walt lets go of his business to be with his family in California.

AS DREAMERS DO is well made and entertaining. The movie is nicely shot, with a driving storyline. AS DREAMERS DO has only minor questionable elements, such as Walt’s mother consenting to sign to permit Walt into the Red Cross during World War I, knowing Walt falsified his age. The movie’s worldview is strongly Christian and moral. Walt’s parents raise their children to do what’s right and adopt a strong work ethic. AS DREAMERS DO will inspire many viewers.

(CCC, BBB, L, AA, D, M) Very strong Christian, moral worldview about Walt Disney’s early career as Walt Disney’s mother and father raise their children to do what is right, father instills work ethic in sons, and family prays to God for reaching Kansas City safely; one “h” obscenity and no profanities; no violence; no sex; no nudity; some comic relief drunks in barbershop; Walt Disney is chain cigarette smoker, others smoking cigarettes; and, Disney lies about his age to be part of the war effort and Red Cross, death, Disney avoids debtors, and Disney faces financial instability as child and adult business owner.

AS DREAMERS DO: THE AMAZING LIFE OF WALT DISNEY is a dramatic biography about Walt Disney’s life before moving to California where he would eventually become a legendary entertainer as a cartoonist and businessman.

Walt expresses a passion and aptitude for art very early in life as he and his younger sister paint the side of their freshly painted white house with black tar. Walt’s Aunt Margaret and brother Roy were his greatest moral support from the beginning. Walt is greatly inspired by his farm and small hometown and draws everything and everybody to hone his skills. No doubt many of the people and animals in his life would become the inspiration for many of his stories.

The family eventually has to leave the farm and Minnesota altogether when Walt’s father Elias grows ill and can no longer afford the farm he’d worked so hard to develop. Eventually, he finds work in Kansas City running a paper route, and he employs his sons to help him. Although Elias is less willing to support Walt’s drawing ability, he eventually supports him, investing his earnings into art lessons.

Walt continues to draw. At the age of 16, his brother Roy enlists in the navy during World War I. Walt, not wanting to be left behind, also tries to enlist, but of course is too young. He lies about his age to get into the war effort via the Red Cross. Still needing his parents’ signature, he tells them he’s joined the Red Cross, and, reluctantly, they eventually give their consent.

During the war, Walt remembers the lessons of getting compensation for his artwork instilled and soon becomes a cartoonist for the soldiers. Walt’s compensation is cigarettes, and Walt becomes a heavy smoker in the military.

Once out of the military, Walt makes many attempts to grow his own business from the ground up. He also has many hungry nights, debt and failed efforts. However, he continues to try, never giving up on his dream to create animation and other forms of family entertainment. When his brother, Roy, becomes ill with tuberculosis, his whole family leaves and moves to California for the milder climate.

Walt continues to struggle. Eventually, his business partner/employees leave because work is so scarce although they still believe in Walt. Finally, Walt lets go of his business to move to be with his family in California as well. However, he never lets go of his dream. Of course, Roy did recover from tuberculosis, and the Disney brothers went on to change forever the face of animation and the entertainment industry.

AS DREAMERS DO: THE AMAZING LIFE OF WALT DISNEY is well made and entertaining. The movie is nicely shot, with a storyline that moves forward. Disney stays constant throughout the movie, despite many changes and setbacks. However, Walt with his optimism and stubborn tenacity to succeed as a business owner in animation/moving pictures, he realizes that sometimes you have to let go. Not the dream necessarily, but the way one goes about achieving the dream. When he let go and moved to California, eventually his business efforts paid off immensely.

AS DREAMERS DO has only minor questionable elements, such as Walt’s mother consenting to sign to permit Walt into the Red Cross, knowing he’d falsified his age. The movie’s worldview is strongly Christian and moral. Walt and Roy’s mother and father raise their children to do what is right, stress the importance of family, and instill the work ethic into their sons. They also pray to God for reaching Kansas City safely. Clearly, God gave Walt Disney the talent, vision and perseverance to pursue great dreams.

Watch AS DREAMERS DO: THE AMAZING LIFE OF WALT DISNEY: