POPIELUSZKO: FREEDOM IS WITHIN US 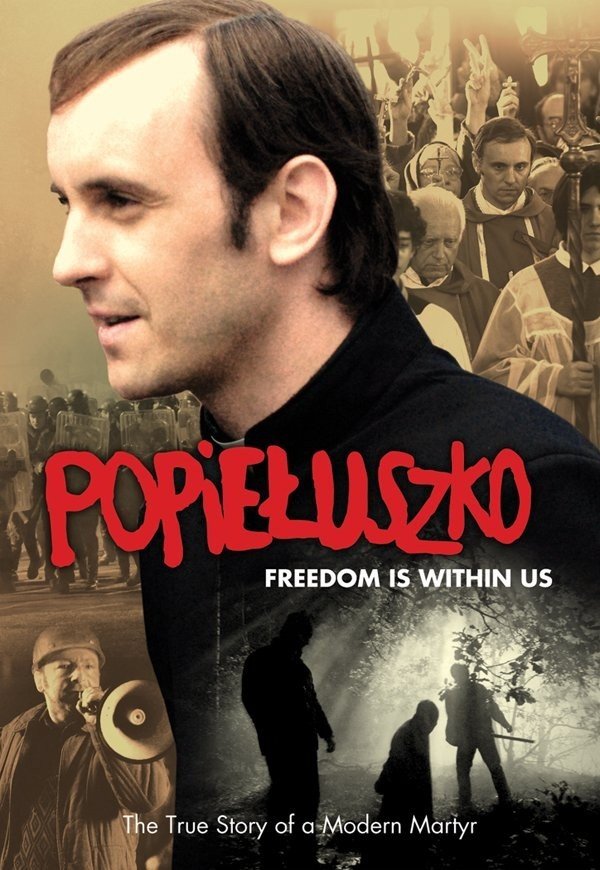 POPIELUSZKO:  FREEDOM IS WITHIN US is an extremely worthwhile movie about a real priest in Poland, Jerzy Popieluszko, who stood against communism. Jerzy refuses to give up his Christian faith in the face of brutal treatment in the communist controlled army. Then, in 1972 when Pop John Paul II makes his first visit to Poland, Jerzy is called to present the sacraments to the Solidarity workers on strike in the shipyards. His sermons proclaim faith and freedom and stress the grace of the Holy Spirit. He witnesses boldly to many. By 1980, he has become an enemy of the State and is tortured and murdered.

Jerzy Popieluszko was one of the few people instrumental in throwing off the Soviet communist boot that oppressed Poland for nearly 40 years after World War II. POPIELUSZKO:  FREEDOM IS WITHIN US is one of those must-see movies. It delineates clearly the difference between Christianity and atheist communism. Although it has some significant Catholic elements, it’s impressively evangelical in its witness. POPIELUSZKO is edited from a TV program, so it covers too much of Jerzy’s life.

(CCC, BBB, ACACAC, L, VV, S, N, A, D, M) Extremely strong Christian worldview with the Gospel presented verbally as well as sacramentally and allegorically since the priest in questions lays down his life to set the Polish people free from communism, with strong Polish Catholic content and several prayers to Mary but surprisingly evangelical for the most part, with the villains being statist, communist totalitarians; seven obscenities and one profanity; a lot of violence in war scenes, persecutions, government crackdowns, torture, but despite the amount of violence, it’s presented in a way acceptable for TV audiences and not with bloody or gory details; no sex scenes but several discussions of people getting pregnant out of wedlock; upper male nudity; alcohol use; smoking; and, concealed weapons and bombs, planted weapons and bombs to convict priest, illegal judges and biased court proceedings, prison scene with two other vile prisoners.

POPIELUSZKO:  FREEDOM IS WITHIN US is an extremely worthwhile movie which would be four of four stars except that it tries to cover too much ground for a feature film for the US market. This movie was also a TV series in Poland. The movie and TV program focus on the story of a real priest, Jerzy Popieluszko, who stood against communism and was one of the handful of people instrumental in throwing off the Soviet communist boot that had oppressed Poland for near 40 years after World War II.

The movie opens in 1953 with Jerzy and his father searching for mushrooms to eat and getting caught in a crossfire between the Soviet communists and some freedom fighters. Jerzy’s father explains that the freedom fighters are knights standing for the Polish people.

Years later, Jerzy is conscripted like everyone else into the army. It is forbidden in the army to pray in groups and to exhibit any other religious behavior. Jerzy refuses to give up his faith, and the army disciplines him in a brutal manner reminiscent of the movie UNBROKEN.

In 1972, when Pop John Paul II makes his first visit to Poland, Jerzy is called to present the sacraments to the Solidarity workers on strike in the shipyards. His sermons proclaim faith and freedom and stress the grace of the Holy Spirit. He witnesses boldly in an evangelical manner to many of the workers. By 1980, he has become an enemy of the State, which is trying to crack down on Solidarity and other anti-communist movements. The secret police watch him constantly and harass his friends. In contrast to their behavior, Jerzy is a man of faith and good humor, and even tries to serve the two secret police officers hot tea as they sit outside all night watching his small apartment.

Eventually, the secret police frame him and throw him into prison, but have to release him because of the tide of public opinion. As the State gets more desperate, Jerzy prepares his friends for his impending death.

POPIELUSZKO is one of those few must-see movies. It delineates clearly the difference between atheist communism and Christianity. Although it has some significant Catholic elements, it is impressively evangelical in its witness. The constant riots, warfare, tortures, and brutality are presented in a powerful but toned-down fashion and never become too gruesome.

As presently constructed, the movie is more of a TV program because it covers too much of Jerzy’s life. If it was significantly edited, it could become a powerful feature film. However, to work in the United States, it would have to be dubbed.

The producers should be commended. Somehow in our age, we have forgotten the cruelty of communism and even the church has turned its back on its martyrs. This movie is an important step in righting the balance.