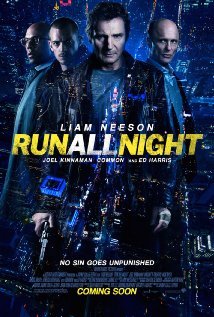 Add RUN ALL NIGHT to Liam Neeson’s growing list of action thrillers, this latest flick packing more of a punch than previous movies. It’s a story about failed fathers, old friendships and paying for one’s sins. Neeson plays Jimmy, an experienced hitman who defends his estranged son’s life by killing the son of his best friend Shawn, a notorious mobster. This puts both Jimmy and his son’s life in danger. Shawn sends his goons, corrupt cops and a dangerous hitman to capture and/or kill Jimmy and his son.

RUN ALL NIGHT may not live up to Liam Nesson’s masterful TAKEN, but it’s better than his other thrillers in many respects. What makes it better is the movie’s strong message of atonement, and its overt stance against drugs, even from the criminal’s perspective. Playing more like a morality tale, Jimmy longs to find atonement for his crimes and for failing his family. It’s a shame the movie is too gritty for many media-wise viewers. Containing brutal deaths, strong foul language and lewd comments, RUN ALL NIGHT is a movie that warrants extreme caution.

(BB, CC, LLL, VVV, S, AA, DD, M) Strong moral worldview with some overt Christian, redemptive elements where main character longs for atonement and forgiveness for his crimes, he seeks this out by defending his son’s life, crime isn’t glorified and murder isn’t justified, including a few Christian elements with multiple crucifixes and a man’s list of crimes is written on the back of a Scripture verse; 57 obscenities (at least half of them the “f” word), 11 strong profanities and three explicit sexual references; strong and graphic action violence with a long list of people killed and murdered via being shot point blank in the head with blood splatter, strangled, explosions, car crashes, stabbings, a man’s arm is broken, a bad guy’s face is burned, and another man gets stabbed with a broken beer bottle; no sexual content other than the lewd language and a very brief shot of some pornographic magazines; no nudity; heavy drinking and some drunkenness, in front of children in one instance; smoking, drug references and drug use, but spoken against; and, racist remarks are made and corrupt policemen take bribes.

Add RUN ALL NIGHT to Liam Neeson’s long filmography list of action thrillers, this latest flick packing more of a punch than previous movies. It’s a story about failed fathers, old friendships and paying for one’s sins, but there is strong foul language and violence.

Neeson stars as Jimmy Conlon, a lifetime friend to Shawn Maguire (Ed Harris), a New York City mobster. When the two were young and started their criminal business, Shawn dabbled in drug trafficking, a decision that proved to be detrimental. The crew started getting hooked on the product, endangering the whole operation. Jimmy, Shawn’s muscle, cleaned up the mess they created and left a stack of bodies behind.

Decades later, Shawn is still a mobster, but he refuses to deal with drugs, even when his trashy son Danny finds Albanian drug lords with whom to do lucrative business. Jimmy has become a drunken mess. His own son Mike, a hard working family man, wants nothing to do with Jimmy, who was so haunted by all of his murders that he left his family. Shawn nonetheless sticks by Jimmy, stating that whatever lies ahead, “they’ll cross that line together.”

One night, Danny gets in trouble with the Albanians and kills them. Mike, who was just in the wrong place at the wrong time, witnesses the crime, so Danny goes after him. Just before Danny can shoot Mike, Jimmy shows up and defends his son, killing Danny. Having just killed the son of the most powerful criminal in the city, Jimmy calls his friend Shawn to deliver the news. Shawn is devastated and tells Jimmy that he’s going to kill him for it, as well as Mike. Even though Mike wants nothing to do with his father, Jimmy is the only one that can save him and his family. They just have to get through one night being chased by angry criminals, corrupt cops and a dangerous hitman.

Can Jimmy atone for his sins at some point along the way and find reconciliation with his son?

RUN ALL NIGHT is intense and action packed from beginning to end. The leading cast is riveting, as well as the supporting cast. RUN ALL NIGHT may not live up to Liam Nesson’s masterful TAKEN, but it’s the best movie from him in a few years. Stylistic directing from Jaume Collet-Serra gives this typical thriller a fresh tone visually. That said, even strong performances can’t save some on-the-nose dialogue.

What makes RUN ALL NIGHT a better Neeson flick is the strong message of atonement, and its overt stance against drugs, even from the criminal’s perspective. Playing more like a morality tale, Jimmy longs to find atonement, not just for his crimes, but for his moral failing of his family. Mike is so hardened against his father, but by the end, he finds some sort of forgiveness and reconciliation for Jimmy. Both Jimmy and Shawn see that their sins have caught up to them. Jimmy is willing to go to the authorities, and even writes down the names of all the people he’s killed, ironically, on the back of a paper with a Scripture passage. While Jimmy is right in knowing that a death is needed to atone for his sins, he doesn’t understand that Christ paid that debt already. Thus, the finale isn’t as satisfying as it could have been. Nonetheless, Jimmy’s entire goal is to save Mike and his family not just from death, but saving Mike from going down the same path that he went down.

RUN ALL NIGHT is too gritty for many media-wise viewers. Containing some brutal deaths, strong foul language and a few lewd comments, RUN ALL NIGHT is a movie that warrants extreme caution.