"The Truth Will Find You" 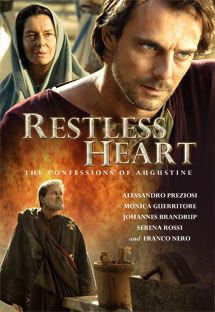 RESTLESS HEART: THE CONFESSIONS OF SAINT AUGUSTINE is a big, bold epic on the order of JESUS OF NAZARETH. It tells the story of one of the most famous Christian theologians in history. Before he became a Christian, Augustine was a celebrated lawyer in the late Roman Empire, one of the best orators around. While fighting against Christianity by confronting St. Ambrose, Bishop of Milan, Augustine’s conscience is pricked by the brutality that Christians suffer at his instigation. Augustine comes to Christ, Ambrose baptizes him, and Augustine becomes one of the greatest theologians ever. Then, Augustine is caught up in a conflagration when the Vandals attack North Africa.

Originally a two-part TV miniseries from Italy, RESTLESS HEART: THE CONFESSIONS OF SAINT AUGUSTINE has big budget production values. The dialogue is excellent. It captures the viewer’s attention. Although it deals with the debauchery of the fallen Roman society, it does so with discretion and wisdom. It clearly gives an evangelistic message and presents the Gospel in terms with which every believing Christian can agree. Prayers are answered, and miracles happen, but life is not easy. Tightening up some loose ends and editing some wordiness would make it a four star movie.

(CCC, BBB, L, VV, S, N, AA, M) Very strong evangelistic Christian worldview with a slight Catholic tint set in the pagan world of the declining Roman Empire, with heretical Arianism and Donatism being rebuked; one obscenity; strong violence includes the start of a Caesarian birth never finished, battle scenes, Roman soldiers attack Christians with blood and death, and discussions of violence, nothing excessive but one man dies with blood coming out of his mouth; suggestions of sexual situations but no visual activity except kissing, girls dancing, Romans lie with women on benches, and protagonist discusses his wanton behavior; upper male nudity and voluptuous women with low-cut tunics and dresses; lots of alcohol use and some drunkenness; no smoking or drugs; and, serious discussions of Manichaeism rebuked, paganism rebuked, lying, cheating, and emperor worship.

RESTLESS HEART: THE CONFESSIONS OF SAINT AUGUSTINE is a big, bold epic on the order of JESUS OF NAZARETH, about one of the most famous Christian theologians in history.

It opens in August 430 A.D. as the North African city of Hippo is surrounded by a barbarian Vandal army. The pope or bishop of Rome sends ships to take Augustine back to Rome with his books, but Augustine wants to stay with his people, even though they have treated him shabbily. As he packs his books, he reminisces with his scribe about his book entitled Confessions, which is the story of his coming to Christ.

Flash back to Augustine’s birth as his mother Monica lays dying in the throws of labor. She tells the midwife to cut the baby out of her as she mutters one last prayer, feels the baby kick and delivers a healthy Augustine. Her husband is a ne’er do well and a drunk who cheats on Monica, while Monica is a woman of great Christian faith. Augustine rejects his mother’s faith because he thinks Monica is weak to accept his father’s errant ways.

Augustine is a brilliant young man; so, at 14, a wealthy friend supports his going to Carthage to study under Macrobius, one of the great lawyers and orators. Augustine becomes the best lawyer and wins some very suspect cases where it’s clear that he saved a guilty client. He has no conscience and just wants fame and fortune.

Eventually, his best friend Valerius tells him that he has been asked to go to Milan to represent the young Emperor against Bishop Ambrose, who is one of the greatest orators of all time and who has been speaking out against the Emperor. Augustine abandons his mistress and child without telling them and heads to Italy.

Eventually, he gets to Milan, where he can confront Ambrose directly. Monica, his mistress and his child follow Augustine to Milan where Ambrose has his cathedral. Augustine uses his mother to get into to see Ambrose, then uses Ambrose’s words to defeat him at the Emperor’s court.

He then uses his oratory skills to convince the Roman army to attack the unarmed Christians protecting Ambrose’s cathedral. He has no conscience because he’s become a Manichean, and the Manicheans believe that no one does anything wrong. Since everything someone does is part of their nature, they cannot be blamed for anything.

However, watching the bloodshed and watching his mother tend to the wounded, Augustine’s conscience is pricked. After a period of soul searching, He is saved and baptized by Ambrose.

The Emperor’s mother furiously banishes him and Valerius back to Hippo. There, he starts writing his famous books and debating heretics such as the Donatists. This brings us back to the beginning of the movie where the Vandals have surrounded Hippo. As the Roman Governor, Valerius wants to fight, while Augustine wants to make peace. He sends his friends off in the pope’s ships, makes a diplomatic journey to talk with the head of the Vandals and is caught up in the conflagration.

SAINT AUGUSTINE has big budget production values. The dialogue is excellent. It captures the viewer’s attention. Although it deals with the debauchery of the fallen Roman society, it does so with discretion and wisdom. It clearly gives an evangelistic message and presents the Gospel in terms every believing Christian can applaud. For instance, Ambrose at one point says to Augustine that you will not find truth, Truth is the person of Jesus Christ who finds you. Jesus does find Augustine. Prayers are answered and miracles happen, but life is not easy.

That said, this originally was a two-part television movie. Therefore, it has two storylines.

The story of Augustine coming to Christ is very powerful and effective. The ending of this part of the story could be tightened a little, but otherwise it is fascinating, better than most religious epics.

There are also a lot of characters in this movie, such as Augustine’s son who disappears inexplicably. These loose ends should be addressed. Cutting the second ending could do that.

Overall, with editing, this could be a four star, exciting feature film, but it’s going to need a big marketing budget. Either that or it needs a sale to a major TV network. Regrettably, however, networks are not buying religious epics like they used to do.

There are a very few areas of concerns in RESTLESS HEART: THE CONFESSIONS OF SAINT AUGUSTINE for Protestants and Eastern Orthodox believers. At this point in history, the metropolitan bishop of Rome was not necessarily considered the pope, and many Protestants will chafe under him being called the pope. In fact, one theologian watching the movie did. But, this could be rationalized since the word “pope” meant father, and the Bishop of Rome certainly filled that role. Secondly, there’s a reference to catholic several times in the film for the main body of Christians. Catholic with a small “c” is the term used in the Nicene Creed for the universal church, but hardcore Protestants may find it alienating. Both of these could be fixed in dubbing to everyone’s satisfaction.