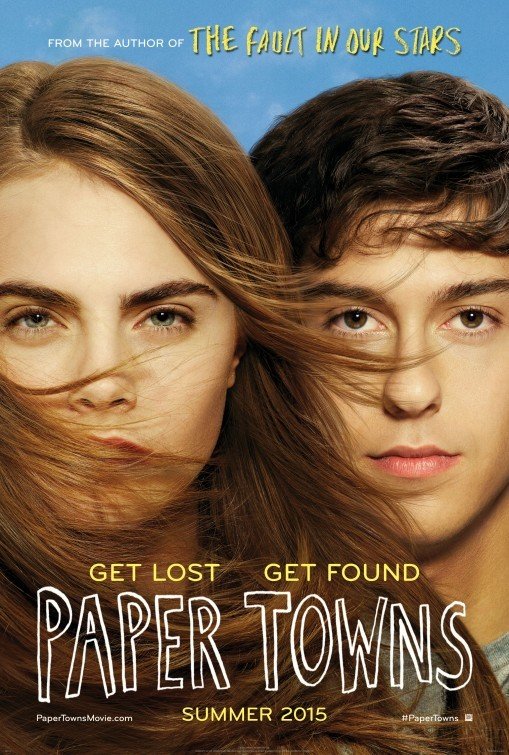 PAPER TOWNS follows a Florida boy named Quentin, who befriends a mysterious girl named Margo. Margo’s more adventurous than Quentin. So, when he becomes a study-driven teenager, and she remains mischievous if not rebellious, they drift apart. One night, Margo climbs in his bedroom window and asks him to sneak out in his family’s car and drive her on a series of nine revenge pranks. Quentin assumes they are now going to start dating. However, Margo disappears the next day. Eventually, Quentin and his friends follow some clues on a road trip to New York, where they believe Margo went.

PAPER TOWNS is an entertaining, often moving journey, with some terrific acting. However, despite some positive messages about friendship and coming-of-age, the movie is damaged by crude elements, obscenities and profanities. The main teenage relationship remains chaste, but not a couple of the other teenage relationships. Ultimately, PAPER TOWNS suffers from a strong Romantic worldview and rebellious spirit that implicitly attacks middle class life in Suburban America, though it may undercut that message at the end. The negative content warrants extreme caution.

(RoRo, APAP, B, C, LLL, V, S, N, A, MM) Strong Romantic worldview implicitly attacking the middle class lifestyle in American suburbs, calling them “paper towns” that (supposedly) lack real substance, with teenage boy searching with his friends for the girl of his dreams, who’s mysteriously disappeared, but movie extols friendship and warns against idolizing outwardly attractive, exotic people, and the main teenage romance remains chaste, in contrast to the movie’s other teenage relationships, plus protagonist thinks everyone gets at least one miracle, but this thought is not given a more explicit Christian development; 19 obscenities, two strong profanities, five to seven light exclamatory profanities, plus urinating in one scene and vomiting; bully shoves boy against a locker, some light vandalism such as saran wrapping a car, body of adult suicide victim found (he shot himself), a near traffic accident, and man brandishes gun at a couple pranksters; implied teenage fornication by supporting characters, teenagers discus sex, teenagers make joking references to self abuse, and teenage girl catches boyfriend cheating and pulls revenge pranks against people who knew but didn’t tell her, but relationship between the two main teenagers remains chaste; upper and rear male nudity when teenage boy runs out of house after being caught cheating on his girlfriend plus some female cleavage and skimpy tops on teenage girls; a party scene with teenage drinking where at least one teenager is drunk; no smoking or drug references; and strong miscellaneous moral problems include teenage rebellion, parents of teenage girl have a permissive attitude toward her periodic disappearances (one summer she ran away to the circus), revenge pranks, teenage bully threatens teenage protagonist in one scene but protagonist plays prank on bully to get back at him, and teenagers spray-paint a letter on walls of houses.

PAPER TOWNS tells the story of a teenage boy who goes on a night-long adventure with the girl of his dreams, only to find she disappears the next day, making him feel he has to go find her. PAPER TOWNS has a strong Romantic worldview that sometimes indulges in rebellious teenage behavior, with plenty of foul language and some off-color humor.

Based on a “young adult” novel by John Green, the movie follows a boy named Quentin or “Q” for short (Nat Wolff), who’s shown as a young boy meeting and developing a friendship with a new mysterious girl named Margo (played as a teenager by Carla Delavigne). She’s always far more adventurous than he is. So, when he becomes a study-driven teenager, and she remains rather mischievous if not rebellious, they drift apart.

One night, however, Margo climbs in his bedroom window and asks him to sneak out in his family’s car and drive her on a series of nine pranks. The pranks are built around revenge on her boyfriend for sleeping with her best friend, and their friends who covered up the affair from her.

Against his initial concerns, but with his romantic feelings for her reawakened, Q agrees to help her. They embark on a series of destructive yet comically portrayed pranks. These involve sneaking into their targeted houses and include spray painting “M” for Margo on the wall of each house. In the main prank, they scare her old boyfriend into jumping out a window naked from her best friend’s house and snapping a picture of him from behind as he runs away.

The night nearly veers into romance by its end, with Margo saying she can’t wait to see Q the next day. Consequently, Q assumes they are now going to start dating. Instead of this, Margo disappears the next day, leaving a trail of mysterious clues that culminate with her saying she’s run off to a “Paper Town,” a fake town that exists only on a map to protect a map designer’s copyright. Margo believes her hometown of Orlando is also a paper town in its own way; that is, a pretty surface with no true meaning behind it. Thus, her life is a quest for meaning by following various adventures.

The rest of the movie becomes an entertaining, often moving road trip, as Q and his buddies, plus one of their girlfriends and another girl team up to follow clues to go find Margo at her paper town in New York State. Along the way, they wrestle with the fact that they are about to graduate and split off from each other’s lives for the first time ever while at college.

Sadly, in addition to the depiction of teenage rebellion and negative attitude toward middle-class American suburbs, this intriguing romantic mystery is damaged by a couple scenes involving sex talk, including some bragging about sexual conquests by a couple teenage males. Also, besides the scene catching the boyfriend cheating, it’s implied two other teenage characters sleep together during the road trip. Despite this, the relationship between the two main characters remains chaste. PAPER TOWNS also has plenty of foul language that goes slightly past the line of being excessive.

Apart from these problems, the rest of the movie is fairly absorbing, with some nice twists and terrific acting. Perhaps, the movie’s best parts are its spirit of friendship among the teenagers who go on the road trip, plus the joy and wonder they express in various scenes as they face the transition to college and adult life. Also, Q believes everyone gets at least one miracle in life, and he thinks Margo is his miracle. This belief isn’t placed into a stronger Christian context, however. Another positive message in PAPER TOWNS is a warning to beware of idolizing other people just because they are pretty, handsome or exotic. The positive messages stand in contrast to the movie’s criticism that today’s society is too rushed and empty. Of course, true fulfillment is found only in a personal relationship with Jesus Christ, the only person who can truly fill the empty holes in your life.