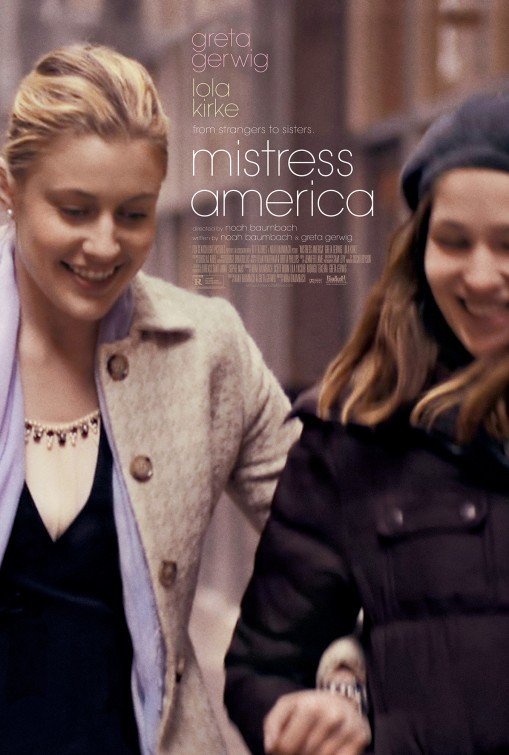 MISTRESS AMERICA is a well produced screwball comedy. The story follows Tracy, a college freshman overwhelmed by New York City. Tracy has a hard time making friends and is drawn to a boy who turns out to have a girlfriend. She’s ready to give up when she remembers her mother asked her to call Brooke, the daughter of her mom’s new fiancé. Brooke invites Tracy out on the town, completely involving Tracy in her adventurous artistic lifestyle surrounded by musicians and other artists. A rift occurs between them when Tracy writes a short story based on Brooke’s crazy character.

MISTRESS AMERICA is engaging, witty and hilarious, with a positive message of forgiveness at the end and some pro-capitalist content. It explores the relationships people build and the trust they put in strangers in a deep, realistic way, even as it stays hilarious throughout. Its insights into the lengths writers should go ethically in writing about real people are also fascinating. That said, it contains plenty of strong foul language and other lewd, immoral behavior. So, extreme caution is warranted for MISTRESS AMERICA.

(PaPa, C, B, CapCap, RoRo, O, PC, Ab, LLL, S, N, AA, M) Strong mixed pagan worldview with light redemptive, moral uplifting elements highlighting repentance, forgiveness and reconciliation during a Thanksgiving dinner at the end and including some positive capitalist content, mitigated by strong Romantic attitudes among the characters, plus movie pokes fun at a psychic and at a politically correct character trying to get someone to fill out a silly pro-abortion survey (the pro-abortion character looks pretty stupid), but women complain about a Catholic relative coming on too strong concerning his Catholicism; about 38 obscenities (including at least 15 “f” words) and at least nine mostly strong profanities, plus drunken woman vomits; no violence; a couple strong verbal sexual references, and a college-age couple is shown lying in bed, with the male wearing no shirt; upper male nudity; alcohol use and underage alcohol use that leads to drunkenness and sickness, but it’s shown in a negative light; brief smoking; and, jealousy, self-absorption and deception.

MISTRESS AMERICA is a screwball comedy about a college freshman who overcomes her loneliness through her friendship with an eccentric 30-year-old woman about to become her stepsister. MISTRESS AMERICA is engaging, witty and hilarious, with a positive message of forgiveness at the end, but its redemptive, moral, pro-capitalist content is mixed with strong Romantic elements, plenty of foul language and some other crude content requiring extreme caution.

The story follows Tracy (newcomer Lola Kirke in a fantastic lead performance), a college freshman overwhelmed by life in New York City when she enters college there. Having a hard time making friends, and drawn to a boy who turns out to have a girlfriend already, Tracy is ready to give up when she remembers her mother asked her to call Brooke (Greta Gerwig), the daughter of her mom’s new fiancé.

Brooke instantly invites Tracy out on the town, completely involving her in her adventurous artistic life surrounded by musicians and other artists. She enables Tracy to get drunk underage, but Tracy winds up getting sick off-screen. Filled with a desire to be accepted by her college’s top literary society and magazine, Tracy starts immediately writing notes about Brooke that form the basis of an ultimately unflattering story based on Brooke’s life.

As she hides her notes and writing, Tracy gets ever more immersed into Brooke’s world. Meanwhile, she also must deal with the frustration of a boy she likes having another, comically jealous, girlfriend. When Brooke is dumped by her boyfriend for kissing another man, and he backs out of investing with her, she’s in danger of losing her dream of building a really good home-style restaurant.

Brooke’s solution is to go to Greenwich, Connecticut to find an old boyfriend and his wife, who ripped Brooke off of a T-shirt design years ago which went on to be a hugely-selling shirt. With Tracy, Tracy’s male friend and the guy’s girlfriend in tow, a hilarious showdown begins over the money Brooke feels the couple owes her for stealing her shirt design.

MISTRESS AMERICA is the latest in a string of engaging movies by director Noah Baumbach, who co-wrote this movie with his girlfriend, Greta Gerwig, who plays Brooke. Building on the strongly appealing WHILE WE’RE YOUNG from this spring, Baumbach has now had two winning movies for mature viewers that depict adult characters with intelligence, wit and less indecent behavior than other movies of its kind.

This movie explores the relationships people build and the trust they put in strangers in a very deep and realistic way, even as it stays hilarious throughout. Its insights into the lengths writers should go ethically in writing about real people are also fascinating. This theme has emotional consequences and ends with a satisfying conclusion, which extols forgiveness.

MISTRESS AMERICA is mainly rated R for language issues, but most of its “f” words come in a few scenes, so there are many segments with almost no foul language at all. Aside from the swear words, there are three brief but fairly graphic sexual jokes. Brooke also uses a psychic twice in the movie, but the tone of those scenes is comical and appears to make the idea of using a psychic seem absurd. The movie also makes one character extremely politically correct, forcing Tracy to answer a questionnaire about how much she supports abortion rights, but that too is shown as extreme and ludicrous behavior. MISTRESS AMERICA also contains some strong capitalist content.

MISTRESS AMERICA mixes strong performances, unique characters and brilliantly witty, fast-paced dialogue in the best tradition of screwball comedy. Extreme caution, however, is advised due to the lewd content and other immoral, problematic elements.