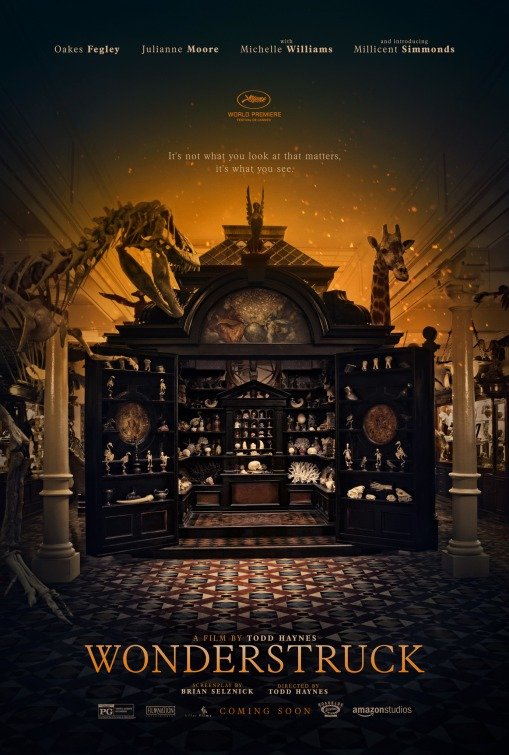 WONDERSTRUCK follows two deaf children having similar journeys 50 years apart. Both run away from home and travel to New York City in search of someone important to them. Ben is on a quest to find the father he’s never known. Fifty years earlier, Rose is trying to find a famous silent movie actress she idolizes. Having difficulty communicating with other people, both children find New York City to be a challenge, but are determined to find the answers they seek.

Despite some veteran actors attached to the cast, the dialogue in WONDERSTRUCK is delivered with little authenticity. This makes it hard for viewers to escape into the fantasy world the movie’s trying to create. Also, the dramatic music and black and white flashbacks quickly become monotonous. Disguised as a family movie, WONDERSTRUCK exhibits a strong Romantic worldview where following your heart is rewarded. Also, the movie teaches that disobeying, lying or stealing are totally acceptable, as long as one is doing it for the “right” reasons. Ultimately, WONDERSTRUCK teaches some bad lessons that undermine its family-friendly intentions. So, MOVIEGUIDE® advises extreme caution.

(RoRoRo, L, V, N, D, MM) Strong Romantic worldview promoting moral relativism and following your heart above all else, both of the main characters run away from home as children in search of a missing parent, plus boy seems to be led to certain places coincidentally, and he goes with his gut instincts (follows where his heart leads) to locate his father; brief foul language on one occasion when boy startles his mother, and she exclaims using both “God” and “Jesus” to express her surprise; light violence as boy is struck by lightning through a telephone causing him to become deaf, and the same boy has a recurring dream where he’s being chased by wolves; no sexual content; a few examples of upper male nudity, mainly on the streets of New York city either walking around or playing in water, partial female rear nudity as a woman is standing on the street in very short shorts that could be considered underwear, a few examples of women in the 1970s who are clearly not wearing bras but are covered with a shirt; young girl is caught smoking a cigarette and convinces boy not to tell on her, and boy’s mother smokes cigarettes, as well as people on the street in New York City; and, a moderate amount of miscellaneous objectionable content, such as a girl steals a magazine from a store to obtain a photo of a famous actress, both main characters run away from home without any sign of consequence from their parents or anyone else, boy’s friend lies to him in order to manipulate their situation, boy steals a wad of cash from his house so he can run away, man steals the wad of cash from the boy later, boy’s new friend lies to his father about staying at a friend’s house so that he can sneak into the museum at night to play with boy, and many examples of moral relativism where characters do bad things and suffer little to no negative consequences because they’re doing it in order to follow where their hearts are leading them.

WONDERSTRUCK follows two young children, Ben and Rose, as they embark on almost identical journeys 50 years apart. WONDERSTRUCK has some poor dialogue, is sometimes monotonous, and contains a strong Romantic worldview with lots of moral relativism where the ends justify sinful means.

In 1927, a young deaf girl named Rose runs away from her home in Manhattan in search of a famous silent movie actress. Fifty years later, Ben becomes deaf by a surprising lightning shock while he was on the phone. When his mother dies in a tragic accident, he sifts through some of her old things, finding a few valuable clues that could lead to his mysterious, absent father. Ben quickly makes the decision to take what he can and run away from his home in Minnesota and go to New York City in search of the answers. For both children, having difficulty communicating, by either hearing or sign language, leads their journeys on even more difficult paths than before. Both children find shelter at the American Museum of Natural History, where Rose is found by her brother, and Ben by a new friend, Jamie.

WONDERSTRUCK is based on a novel by Brian Selznick, known for his work on THE INVENTION OF HUGO CABRET, which was later adapted for a movie by Martin Scorsese, the MOVIEGUIDE® Award winning HUGO. A fan of having the viewer see things through the eyes of a child, Selznick tells this story from the perspectives of two deaf children, who although 50 years apart, are having mirror-like life experiences. This movie takes an extremely dramatic approach to the story, complete with black and white flashbacks. Even though it’s peppered with a few well-known, critically acclaimed actresses such as Julianne Moore and Michelle Williams, the dialogue is delivered with little authenticity, making it hard for viewers to escape into the fantasy world the movie’s trying to create. The dramatic music and black and white flashbacks quickly become monotonous, and there’s little in the story to keep viewers interested throughout the movie’s two-hour running time.

Disguised as a movie for children or families, WONDERSTRUCK exhibits a strong Romantic worldview where solely following your heart is rewarded. Also, moral relativism is acceptable without any form of consequence. For example, both storylines center on children running away from their homes. WONDERSTRUCK teaches that disobeying, lying or stealing are totally acceptable, as long as one is doing it for the “right” reasons.