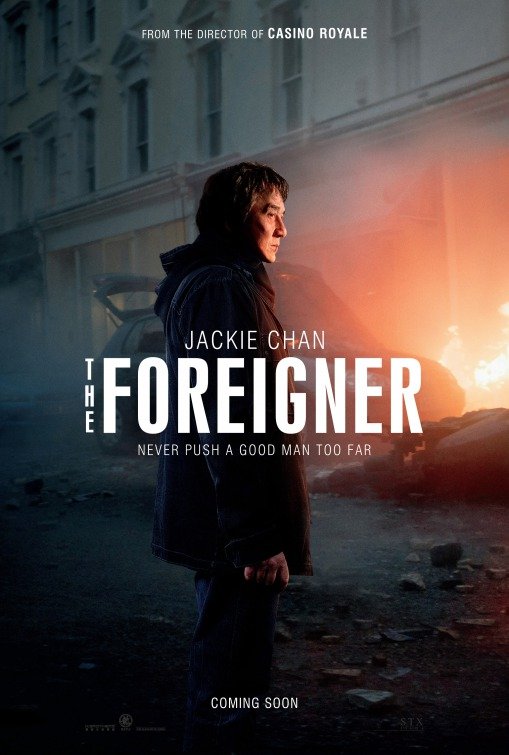 THE FOREIGNER stars Jackie Chan as Quan, a seemingly mild-mannered London restaurant owner. His teenage daughter is killed by an Irish Republican Army (IRA) terrorist bomb. Driven by an obsession for justice, Quan zeroes in on a former IRA leader-turned-peacemaking politician named Liam Hennessy (Pierce Brosnan) to get the names of the bombers to exact revenge. Liam claims he’s just as uncertain who the bombers are as Quan. Since Quan doesn’t believe him, he sets off improvised bombs at Liam’s office, home and other beloved spots to force his cooperation.

This sounds like an intriguing plot, but the pacing is off and the story doesn’t make much sense. Also, much of THE FOREIGNER is bogged down by lengthy conversations, rather than providing the stunning action that Jackie Chan fans have come to expect. However, the movie’s biggest problem is its dark tone. There’s not a moment of joy in Chan’s performance, and the direction and Pierce Brosnan seem just as lackluster. Finally, THE FOREIGNER is a story of revenge, with more than 25 strong obscenities and profanities and some graphic violence.

(H, B, Ab, LLL, VVV, S, N, M) Light, godless humanist worldview where man goes after bad guys for his daughter’s death in a car bombing but with revenge and vigilante justice; at least 24 obscenities (including about 16 or 17 “f” words), 14 strong profanities and a couple light profanities; some very strong and lots of strong, intense violence includes people are punched, kicked, strangled, and thrown, people and corpses with bloody wounds from bombings, point blank shootings with blood, fight in forest includes booby traps in which one villain’s foot is caught on spikes, several gunfights, at least two car bombings, other explosions, martial arts fighting; light sexual content includes shirtless man is seen in bed with his mistress, who’s implied nude under the sheets, after having sex; upper male nudity; multiple scenes of alcohol use; brief smoking in one scene but no drugs; and, deception and betrayal.

There are few career transitions that are more public than those undertaken by movie stars. Time inevitably forces child actors into adult roles, or forces performers in their 20s to deal with the passage into middle age and beyond on an incredibly public scale as their aging process is magnified on the giant screens of multiplexes worldwide.

Sadly, age has even affected Jackie Chan, one of the most giddily joyful performers ever to grace the silver screen. For the past 40 years he’s used a combination of comedy and amazing stuntwork to achieve superstardom, but he’s been largely missing from American theaters since RUSH HOUR 3 in 2007.

He’s attempting a Stateside comeback this weekend with THE FOREIGNER, where he plays a seemingly mild-mannered London restaurant owner named Quan, whose teenage daughter is killed by an Irish Republican Army (IRA) terrorist bomb in the movie’s opening moments. Driven by an obsession for justice, he zeroes in on a former IRA leader-turned-peacemaking politician named Liam Hennessy (Pierce Brosnan) to get the names of the bombers in order to exact revenge upon them.

The problem is that Liam claims he’s just as uncertain of who the bombers are as Quan. Since Quan doesn’t believe him, he begins making a series of improvised bombs and setting them off at Liam’s office, home and other beloved spots in the hopes of forcing his cooperation. As Quan goes ever further in his quest, it’s revealed that Liam is himself surrounded by people he can’t trust.

This may sound like an intriguing plotline, and for much of the movie’s first act, it is fairly compelling. Yet something seems off-base about THE FOREIGNER even from its opening moments.

In addition, much of the movie is bogged down by lengthy conversations, rather than providing the stunning action that Chan fans have come to expect. However, the biggest problem is that the movie has a dark tone that doesn’t fit with what has made Chan so appealing for decades. In playing the depressed Quan, there’s not a moment of joy in Chan’s performance. Most of his stunts are either rote hand-to-hand combat or seem to be obviously performed by stuntmen stepping in on his behalf.

The role of a brooding vigilante might have worked for Charles Bronson in the 1970s, but Chan just looks like he’s tired and hoping his paycheck will clear rather than providing any of his trademark manic energy. His ability to create numerous “McGyver”-style bombs are unexplained through most of the movie, and when his past is revealed, it’s an illogical plothole-filler. Using the IRA as villains also makes THE FOREIGNER seem dated, since even the movie itself acknowledges that the group signed a successful peace treaty with England 19 years ago. Peirce Brosnan appears tired as well, with a hammy Irish accent that’s more distracting than effective. Worst of all is the movie’s horrifically bad music score by Cliff Martinez, which relies on droning keyboards overlaid with absolutely awful effects that sound like a monster having digestive problems.

Director Martin Campbell has made a couple of terrific James Bond movies with GOLDENEYE and CASINO ROYALE, but appears to be phoning it in here. Nearly every moment of THE FOREIGNER feels like a lazy straight-to-cable movie, a story of revenge with more than 25 strong obscenities and profanities and some graphic violence.