YU-GI-OH!: THE DARK SIDE OF DIMENSIONS 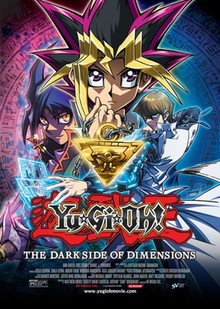 YU-GI-OH!: THE DARK SIDE OF DIMENSIONS is a dubbed, animated fantasy adventure from Japan, the fourth in a series of feature movies. It tells how teenage gaming champion Yugi and his friends must save the world. Yugi must save his friend Joey, Diva and others from being banished forever into another dimension. He must also prevent his nemesis Kaiba from reaching the Millennium Puzzle and reassembling it. If he doesn’t, Pharaoh Atem will rise from the afterlife, summoning destructive consequences for all those in his way.

Though it’s a little long, a fast-paced plot and some brilliant animation and humor make THE DARK SIDE OF DIMENSIONS an attraction for Yu-Gi-Oh fans. Powerful lessons in standing up for what’s right, stopping bullies and avoiding hatred are clear. Ordinary people who change the world in extraordinary ways is another major lesson. Despite this morally uplifting content, THE DARK SIDE OF DIMENSIONS has a strong occult, pagan worldview with characters using magical, mystical powers and a false view of the afterlife. So, MOVIEGUIDE® advises media-wise parents and children to avoid THE DARK SIDE OF DIMENSIONS.

(OOO, PaPaPa, FRFRFR, B, VV, MM) Very strong occult, pagan worldview promoting magic, occult powers to change reality, a false view of the afterlife, references to souls moving on to another life, people can merge with other souls, and summoning monsters and mystical powers with some positive moral elements about good versus evil, opposing bullies and doing the right thing; no obscenities or profanities, but there are references to people being losers; many animated battles includes duels between characters evoking monsters, and people being picked up and thrown; no sexual content; no nudity; no alcohol use; no smoking or drug use; and, a moderate level of miscellaneous immorality and worldview problems such as lying, stealing, revenge, greed, bad role models, dysfunctional family portrayal(s).

he old gang is back in YU-GI-OH!: THE DARK SIDE OF DIMENSIONS, an action-packed continuation of the YU-GI-OH franchise, a series of animated fantasy adventures about a teenage gaming champion.

Yugi Muto, on the brink of graduating high school, discusses with his friends what they want to do when they graduate. Yugi only sees himself helping at his grandfather’s game store. However, he has dreams of creating his own games as well. They see an old friend at school, Aigami, who is anything but ordinary. This turns their seemingly mundane plans around as Yugi realizes he must save his friends from banishment to another dimension.

Yugi’s old nemesis, Seto Kaiba, uses a powerful cube to banish Yugi’s friend, Joey, into a new dimension. Yugi and friends must go to the Millennium Stone in order to reassemble the Millennium Puzzle to save Joey and destroy Kaiba.

In a flashback, Master Shin, an expert at wielding the Plana, a mystical almighty power that gives people the ability to bend reality to create a world without evil or fear, says that, when the seven treasures of the Millennium Puzzle are inserted into Egyptian Pharaoh Atem’s Millennium Stone, the door to the afterlife will open, and Atem’s dead soul will be able to return. When this happens, the Plana’s power will be the children’s to wield how they see fit. When Atem died, the power of the Plana was granted, but should he ever return from the afterlife, his power will be recanted. If Kaiba gets there first and gets hold of the Millennium Puzzle, Atem will rise, unleashing a new reign of terror on the world and banishing Yugi and friends into an alternate dimension. Kaiba summons Atem, and they all have one last duel.

Will Yugi save his friends before it’s too late?

Fans of the YU-GI-OH! series will not be disappointed. Children will be enthralled with the fast-moving plotline, where use of the Yu-Gi-Oh cards, which can summon monstwers, powers and spirits, is prevalent throughout the movie. Purchasers of the DVD will also receive an Obelisk card, an important element for those who play with Yu-Gi-Oh cards.

On the good side, the movie teaches clear, powerful lessons in standing up for what’s right, stopping bullies and avoiding hatred. Ordinary people who change the world in extraordinary ways is another major lesson.

Having said this, parents should be concerned about THE DARK SIDE OF DIMENSIONS and the impact it may have on their child’s worldview. This seemingly innocent movie goes far beyond a simple good versus evil concept. Most of the story is wrapped in serious occult, anti-biblical practices. Many characters speak about the power of the Plana and how it takes energy and life out of the soul. Characters in the alternate dimension appear zombielike. Several references are made to prophecies, soul crushing and magic. Several characters are even called magicians. References to being in tune with energy are also used. The millennium ring, one of the seven treasures, also has the power to affect souls, making doing evil feel good. Parents and media-wise moviegoers should exercise caution while watching this film with young children.