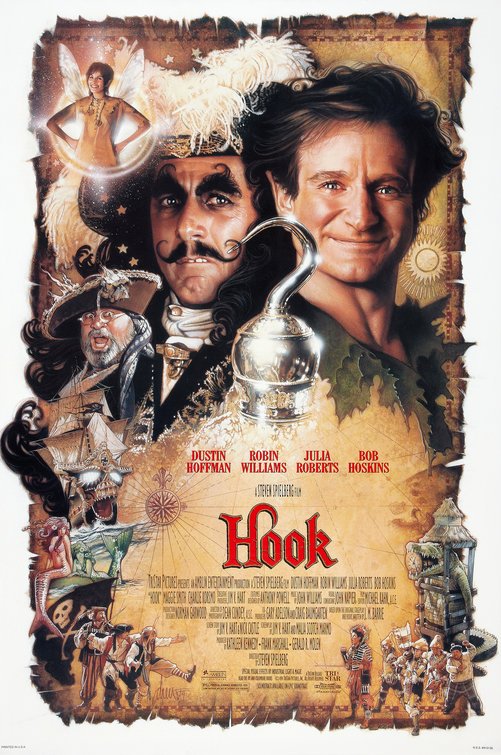 n Steven Spielberg's HOOK, Captain Hook returns to wreak revenge on a grown up. The 35-year-old Peter Banning, his wife, Moira, his son, eleven-year-old Jack, and his daughter, seven-year-old Maggie, travel to London to visit the 92-year-old Wendy. All Peter remembers is that Wendy rescued him from an orphanage. This very night, Wendy is to be honored by the same hospital, so the children are left at home, where Hook finds them and carries them off--leaving a ransom note pirate-style. The rest of the story revolves around Peter regaining his sense of joy and youth to take on Hook, a process abetted by the feisty Tinkerbell.

Regrettably, there are some vulgarities and sexual innuendoes. Other possible detractions are the swordplay violence, the "light" fairies and the film's length. However, the magnificent pirate sets and the acting of Dustin Hoffman and Robin Williams offset the movie's shortcomings. Spielberg's able direction, too, presents a definite plus. By helping our children to understand the difference between make-believe and reality, we can enjoy HOOK and even welcome it as a delightful escape into Never Never Land.

(L, V, A/D, B) Some "borderline" vulgar language (including slight sexual innuendo); violence in Captain Hook's sword fights and swordplay; and, substance abuse (alcohol) in scene with somewhat tipsy Peter. However, there is a prominent biblical theme and messages.

Steven Spielberg’s much-awaited movie HOOK–wherein Peter Pan is all grown up–comes to the big screen just in time for the holidays. Director Spielberg allows, when asked about making HOOK, that “I’m also Peter Pan. I’ve always been Peter Pan. That’s why I wanted to do this movie. In a way, it’s typecasting for me to do this, because I’ve always felt a great affinity for that character.”

In the original PETER PAN by J.M. Barrie, Peter Pan has run away to Never Never Land to escape growing up, living there as a leader of a gang of lost children. While searching for his shadow, he encounters Wendy Darling and her two brothers, whom he teaches to fly and brings home with him. Peter, Wendy, and the boys experience subsequent fights with the villainous Captain Hook, and the fairy Tinkerbell protects them. Sadly, however, the Darlings must go home (though Wendy promises to return each year), and Peter cannot accept their offer to stay in a world where kids grow up.

Enter the updated version that answers two questions: 1) “What if the crocodile (at the close of PETER PAN) does not eat Captain Hook?” and, 2) “What if Peter grows up?”

Thus, in HOOK, Captain Hook returns to wreak revenge on Peter, and, Peter is grown up. In fact, not only is he grown up, but he is also stressed out from being career oriented and has stopped believing in the things he believed in as a child.

The movie begins in San Fransisco, then travels to London on a trans-Atlantic flight which includes 35-year-old Peter Banning (Robin Williams), his wife, Moira (Caroline Goodall), his son, eleven-year-old Jack (Charlie Korsmo), and his daughter, seven-year-old Maggie (Amber Scott). A short time later, Peter is reunited with the 92-year-old Wendy (Maggie Smith) in her home. Actually, all Peter remembers, is that Wendy rescued him from an orphanage. This very night, Wendy is to be honored (by the same hospital, incidentally, that author Barrie endowed in real life), so the children are left at home, where Captain Hook finds them and carries them off–leaving a ransom note pirate-style.

Not wanting to spoil this one-of-a-kind children’s tale, suffice to say, the rest of the story revolves around the grown-up Peter’s regaining his sense of joy and youth to take on Hook, a process abetted by the feisty, tomboyish Tinkerbell (Julia Roberts).

When Tinkerbell retrieves Peter for the trip from London to Never Never Land, she is appalled at the state he is in–love handles, a disbelief in his ability to fly, and “a little horsie” on his golf shirt. However, she still loves him.

Although HOOK does not contain obscene language, there are some borderline vulgarities. Also, we witness a slightly drunken Peter in one scene spouting somewhat guarded sexual innuendoes as he talks with Tinkerbell, who also uses some fairly off-color language.

Other possible detractions in HOOK are the swordplay violence, the “light” fairies, Julia Robert’s unconvincing performance as Tinkerbell, and the film’s length–the two hours and fifteen minutes’ worth will be difficult for some small children to manage.

On the other hand, the 70 million-dollar-film budget combined with elaborate, magnificent make-believe-pirate sets and the acting genius of Dustin Hoffman as Captain Hook and Robin Williams as Peter Pan, offset the movie’s shortcomings. Spielberg’s able direction, too, with his finely tuned eye for detail and precision (and his ability to see things through a child’s eyes), presents a definite plus.

Considering director Spielberg’s remark about his being Peter Pan, it is clear that his films often turn out to be a glorification of childhood. Throughout HOOK, in fact, Peter’s altered appearance and attitude, resulting from his growing up, are obvious. However, in the movie’s final scenes, Peter regains the perspective of his lost youth when he returns to his Neverland roots, sheds paunch and mid-life blahs, rescues his kids with Tinkerbell’s help, and once again, believes he can fly. Thus, Peter reconciles his inner child with the man he has now become.

Indeed, through this latest effort in HOOK, it seems that Spielberg is exploring ways to make the transition from childhood to adulthood as painless as possible. However, considering Spielberg himself, we need to keep in mind that some boys take a long time to grow up.

Since HOOK turns on the idea of “growing up,” which we all have to do, how should we respond to this movie? Saint Paul advises us in I Corinthians 13:11: “When I was a child, I spoke as a child, I understood as a child, I thought as a child; but when I became a man, I put away childish things.” However, by helping our children to understand the difference between make-believe and reality, we and our children can enjoy HOOK, and even welcome it as a respite from the daily grind, and as a delightful escape into Never Never Land. There, we do not have to encounter change, and we do not have to grow up–along with all that growing up entails, especially grown-up responsibilities.