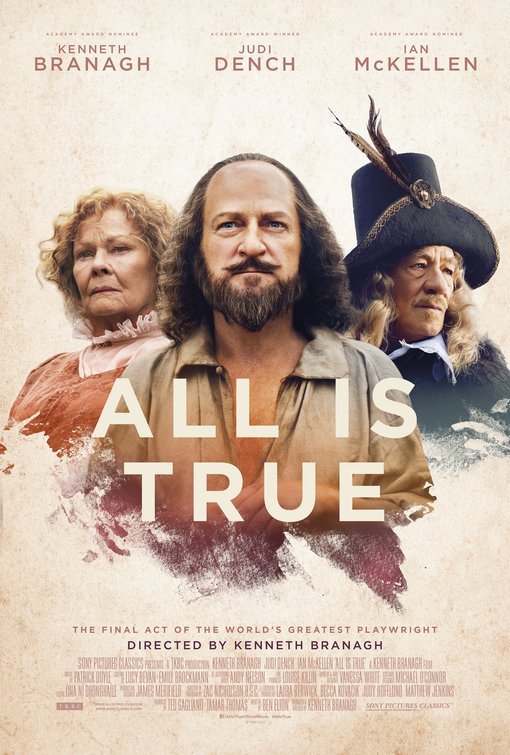 ALL IS TRUE is supposedly about the last three years of William Shakespeare’s life. In 1613, Shakespeare suddenly retires when the Globe Theater, which he co-owned, sadly burns down. Still haunted by the death of his son, Hamnet, at age 11, about 17 years ago, Shakespeare returns to live with his family in the country. He’s estranged from his wife and two daughters, especially Hamnet’s twin sister, Judith, who resents her father’s obsession with his dead son. Shakespeare is more cordial to her older sister, Susanna, until she’s accused of being unfaithful to her husband, which leads to a public trial. Will Shakespeare and his family reconcile?

ALL IS TRUE endorses the somewhat controversial allegation that Shakespeare had an unrequited homosexual love for the Earl of Southampton, who’s believed to be the “fair youth” mentioned in many of Shakespeare’s sonnets. The movie also claims that some poems Shakespeare’s son, Hamnet, allegedly wrote before he died, were actually written by Hamnet’s twin sister. Thus, ALL IS TRUE has a very strong Romantic, politically correct, false, unbelievable worldview that promotes feminist and aberrant critical theory.

(RoRoRo, PCPCPC, FeFeFe, HoHo, RHRHRH, C, L, V, S, N, A, M):
Dominant Worldview and Other Worldview Content/Elements:
Very strong Romantic, politically correct, false worldview promoting feminism and homosexuality, where the movie claims that corrupt 17th Century Protestant England has suppressed, plus very strong revisionist history and some Christian references
Foul Language:
Five obscenities, three strong profanities using Christ, and one “Good God” light profanity
Violence:
Man is haunted by death of his young son
Sex:
Talk about possible adultery, implied marital sex in one scene, it is said that two people got married because the younger man had gotten the woman pregnant, and references to an unrequited homosexual love by William Shakespeare for a nobleman, who comes to visit Shakespeare one day in his old age but clearly isn’t interested in Shakespeare’s apparent homosexual passion for him
Nudity:
Upper male nudity in one scene
Alcohol Use:
Alcohol use
Smoking and/or Drug Use and Abuse:
No smoking or drugs; and,
Miscellaneous Immorality:
Shakespeare’s family is somewhat dysfunctional, and it’s alleged he neglected them, and Shakespeare expresses disagreement with his son-in-law’s Puritan beliefs, which conflict with the Anglican Church to which Shakespeare belongs.

ALL IS TRUE is a period drama about the last three years of William Shakespeare’s life after he retired from writing to be with his family in the country. ALL IS TRUE is a politically correct historical drama that indulges the mostly fanciful theories that, when he was about 30, Shakespeare had an unrequited love for a handsome younger nobleman and that one of his two daughters was a literate wordsmith and poet in her own right. There’s some slight evidence for the former, but no evidence for the latter.

In 1613, Shakespeare suddenly retires when the Globe Theater, which he co-owned, sadly burns down. Still haunted by the death of his son, Hamnet, at age 11, about 17 years ago, Shakespeare returns to live with his wife, Anne, and Hamnet’s twin sister, Judith. Their other daughter, Susanna, is married to a physician, John Hall, and have one child, Elizabeth. Shakespeare tries to ease his grief concerning Hamnet by planting a memorial garden for his son, but still has questions about Hamnet’s death, supposedly by drowning (in reality, Hamnet probably died of plague).

The movie says Shakespeare’s wife is upset about her husband’s extravagant displays of affection for the Earl of Southampton in some of his sonnets written 10 to 20 years ago. Meanwhile, Shakespeare’s daughter, Judith, resents her father’s emotional preference for her dead twin brother. Shakespeare is more cordial to her older sister, Susanna, until she’s accused of being unfaithful to her husband, which leads to a very public trial.

Will Shakespeare and his family reconcile?

ALL IS TRUE is also Shakespeare’s alternate title for his play HENRY VIII. In addition to endorsing the somewhat controversial allegation that Shakespeare had an unrequited homosexual love for the Earl of Southampton, the movie also claims that some poems that Shakespeare’s son, Hamnet, wrote before he died, were actually written by Hamnet’s twin sister, Judith. Thus, ALL IS TRUE has a very strong Romantic, politically correct worldview that promotes feminist and aberrant critical theory.

The idea that Shakespeare had an unrequited homosexual love for a famous Earl and may have been bisexual, has been a theory that dates back to about 1780. Of course, other scholars disagree with this idea that Shakespeare had bisexual inclinations. They note that, in Shakespeare’s day, and for a long time thereafter, close friendships between men were more highly valued and had nothing to do with homosexuality, a term that wasn’t invented until well after Shakespeare was dead and buried. Still other scholars note that there is a strong Christian element in Shakespeare’s sonnets, including overt references to Jesus Christ in the “fair youth” sonnets. In fact, though the sonnets are dedicated to someone with the same initials as the Earl, the dedication says that the man is “the only begetter of the ensuing sonnets,” a metaphor linking the man with the only Son of God, Jesus Christ. Thus, Jesus Christ becomes the subject of some of the sonnets about the “fair youth,” especially Sonnet 37 and some of the later sonnets. By inserting these Christian elements in his sonnets, Shakespeare actually is highlighting the similarities of different forms of human love with the divine love we find through Christ. The focus is more on Jesus instead of the “fair youth.”

Finally, as noted above, there’s no evidence that Hamnet’s twin sister, Judith, was a literate wordsmith and poet in her own right. In the movie, Shakespeare discovers that Judith was the real author of some poems that Hamnet allegedly wrote before he died, but Shakespeare was a male chauvinist who couldn’t even conceive of the idea that a female could write anything of high quality. Thus, only when Shakespeare is able to acknowledge that Judith wrote the poems is he able to reconcile with her and his wife. In reality, the preponderance of the evidence indicates that Judith was illiterate and could neither read nor write, except perhaps for her name. So much for the feminist plot in ALL IS TRUE that becomes such a big part of the movie.