"What Would Jesus Do?" 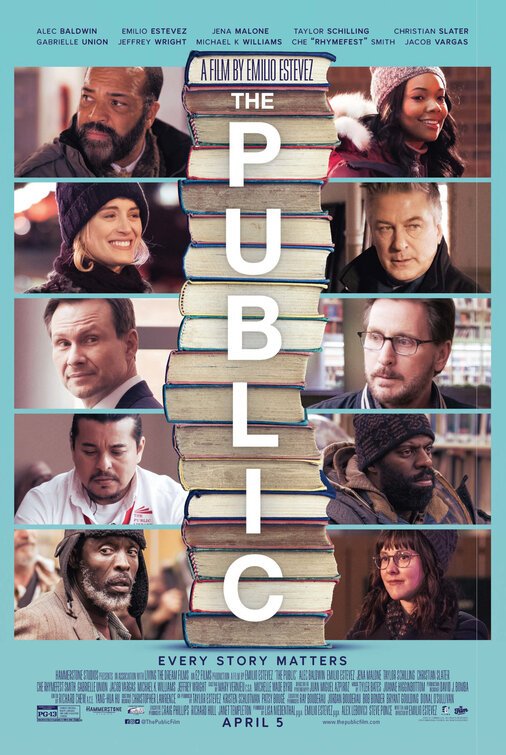 THE PUBLIC is about a Cincinnati librarian who’s forced into a tense situation with police when a group of homeless folks decide not to leave the library on the coldest night of the year. Stuart is the head librarian at the downtown Cincinnati library, a humble man who tries to treat everyone who comes through its doors with respect. He’s good friends with many homeless patrons who spend their days there. During a particularly harsh winter, Stuart’s concerned that some of them have died and is afraid more will follow. The issue comes to a head when a group of homeless people refuse to leave the library on the coldest night.

THE PUBLIC is emotionally engaging, funny, warm, and humane. Director Emilio Estevez, who also plays Stuart the librarian, draws excellent performances from his large cast and manages to keep the movie exciting when it could have felt claustrophobic. Best of all, the issue of “what would Jesus do” is addressed several times in casual conversation that’s thoughtful and respectful. Some foul language and naturalistic nudity in THE PUBLIC warrant strong caution.

(BB, CC, L, V, S, N, AA, DD, M):
Dominant Worldview and Other Worldview Content/Elements:
Strong moral worldview that asks, “What would Jesus do” at one point
Foul Language:
Four obscenities (including one “f” word) and two GD profanities
Violence:
One homeless man leaps up and throws himself at the librarian, knocking him down and punching him, and police are seen running in riot gear, but the situation is defused and violence avoided
Sex:
A man and woman are seen kissing passionately while clothed before the scene fades out and shows them talking the morning after as he’s leaving for work, both fully clothed
Nudity:
One fat man is seen naked from behind, his bare buttocks, while singing a song loudly in the library, and the protagonist later leads 70 men into stripping and being seen naked from behind as they stage a non-violent protest
Alcohol Use:
Some references to alcohol problems among the homeless
Smoking and/or Drug Use and Abuse:
No smoking but some references to drug abuse problems among the homeless; and,
Miscellaneous Immorality:
Some sarcastic, disrespectful comments.

THE PUBLIC is about a Cincinnati librarian who’s forced into a tense situation with police when a large group of homeless patrons decide not to leave the library on the coldest night of the year. THE PUBLIC is emotionally engaging, funny, warm, and humane, with a strong moral worldview that also asks “What would Jesus do?”

Stuart Goodson (Estevez) is the head librarian at the downtown Cincinnati library, a humble man who tries to treat everyone who comes through its doors with respect. He’s good friends with many of the homeless patrons who spend their days there, and amid a particularly harsh winter, is concerned that some of them have died and is afraid more will follow.

He has an idealistic main assistant named Myra (Jena Malone) who spouts liberal platitudes and tries to push him to let the homeless stay there and avoid the cold night. At first, he dismisses her with wisecracks, before being further pushed in that direction by a conversation and the start of an affair with his female landlord, Angela (Taylor Schilling).

However, as the end of the day approaches on the coldest night of the year, 70 homeless men decide to stage a nonviolent sit in and refuse to leave for the night. Having seen one man die the night before, Stuart decides to take their side, and soon he’s caught up in a battle of wits and moral principles against police hostage negotiator Bill Ramstead (Alec Baldwin) and a district attorney running for mayor (Christian Slater).

As the night progresses, THE PUBLIC becomes a stirring movie that addresses many of the seemingly unsolvable problems facing America today. Estevez also wrote and directed the movie, which might lead some to expect that this son of liberal icon Martin Sheen would tow the liberal line, but throughout the movie, he surprises by portraying both sides with respect and empathy.

This is a movie that’s not only intriguing but emotionally engaging, funny, warm, and humane. Estevez draws excellent performances from his large cast and manages to keep the movie exciting when it could have simply felt claustrophobic.

Best of all, the issue of “what would Jesus do” is addressed a few times in casual conversation that is nonetheless thoughtful and respectful in this regard as well. The movie is marred by a brief implied sex scene. There’s also a scene where one insane man’s bare buttocks are seen in a comically played scene. Finally, Stuart and the homeless men are seen naked from behind during a comical protest scene.

Overall, THE PUBLIC is a sadly overlooked movie that may find an appreciative audience on streaming and home video.