LIGHT OF MY LIFE 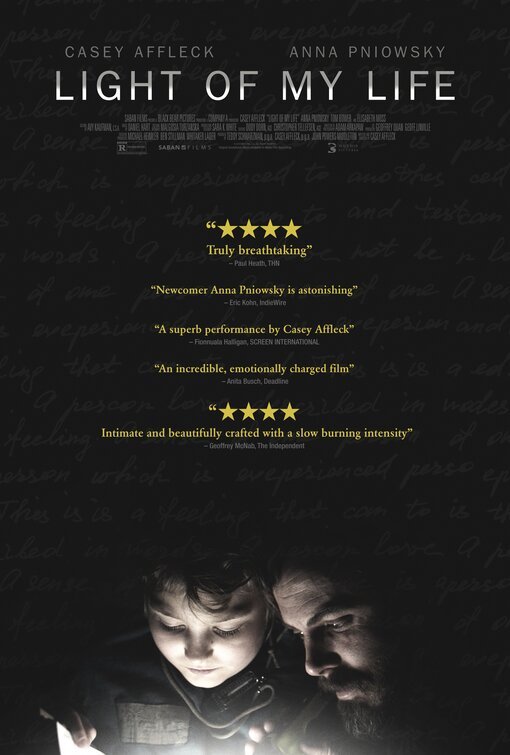 LIGHT OF MY LIFE is set in a post-apocalyptic world where a plague has wiped out half the world. Newcomer Anna Pniowsky delivers a great performance as Rag, who must move from location to location for safety. To protect her from unknown predators, Rag’s father tells her to pretend she’s a boy in public. Fleeing whenever they’re in danger, they move from place to place, which ends in a dramatic conclusion.

Starring, written and directed by Casey Affleck, LIGHT OF MY LIFE wrestles with morals and ethics as father and daughter think about their future. Dad, a pacifist who doesn’t believe in violence, must change when attackers threaten Rag’s safety. The movie is dark in a lot of places, giving extra credence to the title LIGHT OF MY LIFE, where Rag is her father’s only light in a truly dark world. The only other light is Tom, the Christian owner of a mountain refuge who tells Rag and her father they should have faith in God and trust in His plan. MOVIEGUIDE® advises extreme caution for strong violence, scary scenes and dark moments.

(BB, CC, Ev, Ab, VV, S, A, MM):
Dominant Worldview and Other Worldview Content/Elements:
Strong moral worldview in story about a father protecting his daughter in a post-apocalyptic world, with talk about listening to one’s “inner voice” or conscience, and with strong Christian elements where a kind man they encounter says God will protect His followers and they should have faith in Him and trust in His plan and man encourages father to “let go and let God,” but father and daughter don’t follow his advice, plus father mentions evolution and tells a version of Noah and the Great Flood, then says maybe it’s a made-up story;
Foul Language:
No foul language;
Violence:
Moderate level of violence includes one scene of a man hitting another man with a hammer in the back of the head, one man hitting another man’s head against a floor, one man choking another man, one person shooting another person with a shotgun, one image of two dead bodies (skeletons with clothes are depicted), references to attempted rape, and one man kicks a door down;
Sex:
There’s a description of puberty and intercourse, and one implied description of rape;
Nudity:
No nudity;
Alcohol Use:
Brief alcohol use;
Smoking and/or Drug Use and Abuse:
No smoking or drugs; and,
Miscellaneous Immorality:
Strong miscellaneous immorality includes people prey on the weak.

Casey Affleck stars, directs and writes LIGHT OF MY LIFE, a story about a father and his daughter, Rag, who must protect themselves when a plague has wiped out half the population. Dad must protect Rag from looters and other enemies who seek to wipe them out and take their possessions since supplies are at a shortage. To protect his daughter, Dad tells people she’s a boy, and no one questions it because she has short hair and plain features. When Rag becomes ill, tensions run high as Dad fears she has the plague.

When Dad and Rag come upon an abandoned home, they seek temporary shelter there until attackers try to attack Dad and Rag at their campsite. More people means less supplies, and it’s the fittest (and quickest) who survive in this movie. Keeping a low profile is top priority, as Dad chastens Rag not to wear any of the new clothes found in the abandoned home’s closet. He also makes several hiding places around the home in case of a “red alert” where the family is at risk of being attacked.

Girls in this world are especially at risk because dangerous people will want to use Rag to procreate and populate the world again. These attacks happen two times in the movie, and quickens the otherwise slow moving, non-musical plot. Attackers come to the abandoned home pretending to need gas and to dry off from a recent storm, but Dad and Rag escape unharmed. Dad vows not to leave Rag no matter what happens. Weathering the storms, both physically and figuratively, as they dodge attackers and try to survive in a world that is far from kind to them.

They trek to a home on top of the mountains where they meet three men. It is here that the men offer them shelter for the night. Dad overhears them reading the Bible and knows they are kind men who are hospitable. Their place for shelter, however, doesn’t last as three other men come to attack Tom and the other men. Dad allows Rag to escape, then must defend himself against the men. The movie has a dramatic ending that makes viewers hope they never have to live in a world like the one depicted in this movie.

LIGHT OF MY LIFE has a strong moral worldview with some overt positive Christian elements. At one point, Rag asks Dad what’s the difference between morals and ethics. When Dad explains morals are a set of choices that determine right and wrong, and ethics are how those morals apply to specific situations. Thus, it becomes clear that Rag’s father tries to explain a moral society and how to determine right from wrong without God. This is particularly ironic when they take refuge in an abandoned church after the attackers ransack their home. Also, Dad and Rag must listen to their “inside voice” (their conscience) to make good choices. Dad’s humanism is challenged, however by the kindness of the men in the mountains. Before one of the men, Tom, leaves for town, he tells Dad, “Jesus says Come and eat breakfast. And none of the disciples asked who he was, because they knew it was the Lord. In Jesus name. Amen.” The man also challenges Dad to “let go and let God” and let God make the plan instead of running from their enemies.

Pacifism is also explored in LIGHT OF MY LIFE. Dad promises Rag he will never hurt anyone who tries to attack them, but his philosophy is tested in the final scenes when he must fight for both his and Rag’s lives.

The cinematography in LIGHT OF MY LIFE is well done, but it’s often dark, illuminated only by candles or a lamp to indicate they need to keep low light so as not to arouse suspicion. Although the plot should be riveting and quick paced, it is slow and sometimes boring.

Despite its R rating, LIGHT OF MY LIFE is surprisingly clean. There are a couple implied references to rape and a description of how babies are made. Finally, the violence is brief but strong. MOVIEGUIDE® advises extreme caution for strong violence, scary scenes and dark, intense moments.

Watch LIGHT OF MY LIFE: