"Inspirational Story but Too Crude and Lewd in Parts" 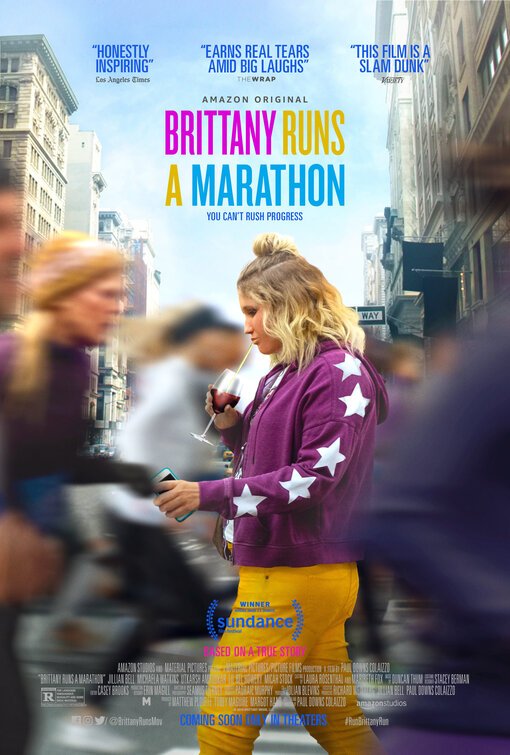 BRITTANY RUNS A MARATHON tells the true story of a degenerate, lonely woman who’s warned by her doctor she will die young if she doesn’t quit drinking and lose weight. Brittany’s scared straight by this diagnosis and wants to change, but she doesn’t even know how to begin until she meets a young married homosexual man in a running club. She’s also befriended by a concerned female neighbor who overcame a heroin addiction and wants to help Brittany. Brittany keeps moving forward, but when she experiences a serious injury just weeks before the marathon, her plans are thrown for a loop.

BRITTANY RUNS A MARATHON is an inspiring, funny and positive portrayal of a woman learning to become a better person. The movie’s star, Jillian Bell, and its writer/director, Paul Downs Colaizzo, team up to make the movie equally funny and inspiring. Sadly, BRITTANY RUNS A MARATHON is undercut by lots of strong foul language, a depiction of self-destructive hedonistic behavior and the politically correct subplot of a same-sex marriage between two men with two children. So, MOVIEGUIDE® advises excessive.

(C, B, H, PCPC, HoHo, LLL, SS, N, AA, DD, MM):
Dominant Worldview and Other Worldview Content/Elements:
Light redemptive, moral worldview, with some humanist elements, as a promiscuous, chubby young woman who drinks alcohol and smokes cigarettes to excess, and sometimes indulges in marijuana, decides to change her hedonistic ways, which could kill her, and become a better, healthier person, plus a politically correct subplot about a man married with another man, and the homosexual couple is raising two children
Foul Language:
At least 52 obscenities (including many “f” words), three strong profanities, and eight light profanities
Violence:
No violence
Sex:
A scene of partially depicted fornication, implied oral sex in another scene, passionate kissing in one scene, and an unmarried couple is cohabitating at the end of movie, but it’s implied they will wind up married
Nudity:
Upper male nudity and woman’s nude back is shown as she checks how her program of losing weight is going
Alcohol Use:
Title character drinks to excess and gets sick, but she stops drinking after a doctor warns her she will kill herself if she doesn’t stop, and quitting drinking and making healthier choices are a main focus in the movie
Smoking and/or Drug Use and Abuse:
Title character smokes cigarettes and marijuana but gives them up to become more healthy, and a female character who helps her has overcome a heroin addiction; and,
Miscellaneous Immorality:
Title character has a very dour and lazy attitude toward life at first and is filled with bitterness, but her heart and attitude change for the better as she decides to become a better, healthier human being.