"Rousing Historical Epic, from Japan to China with Love" 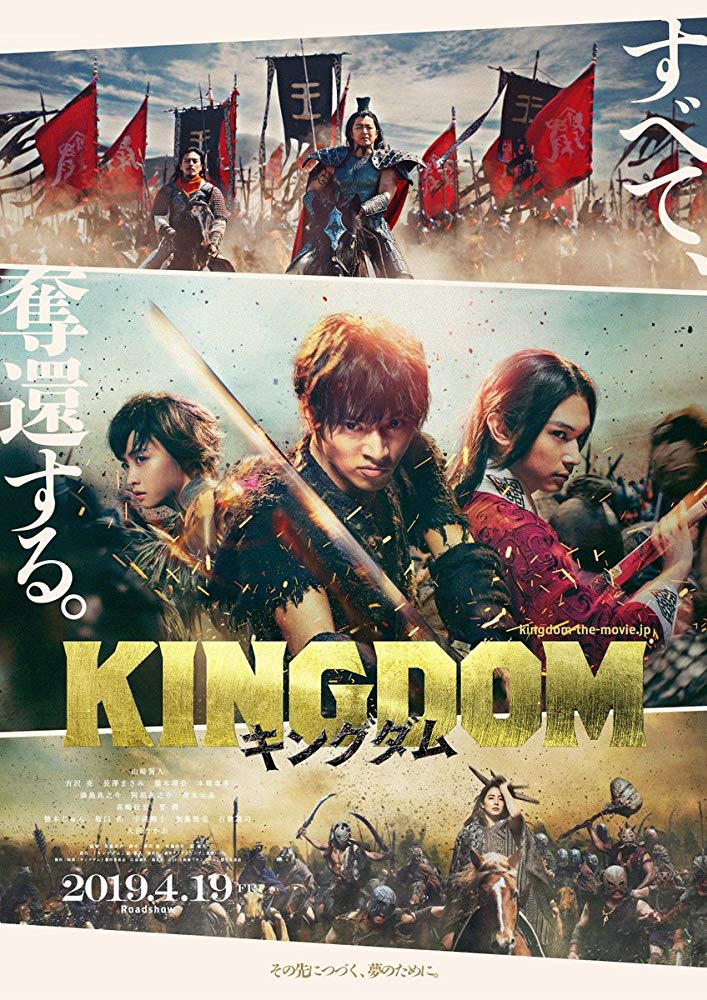 KINGDOM is a fictionalized historical epic from Japan about the first Emperor to unite China in 221 B.C. The movie tells the first part of that story. Most of it occurs in 245 B.C., after a young man named Xin [“Sheen”] meets King Zheng, ruler of the most powerful province in China. Zheng wants to unite all the warring Chinese provinces into one country, but his half-brother has staged a murderous coup and usurped the provincial throne. Xin, an orphaned boy sold into slavery, has trained to become a talented swordsman so he can be a great military leader someday. He agrees to help the king retake his throne.

Spectacularly photographed and designed, KINGDOM is a rousing epic tale based on Chinese history. Some battle scenes are repetitious or could be shortened, however. MOVIEGUIDE® advises extreme caution for KINGDOM, because of its frequent battle scenes, which sometimes contain extreme violence, and some foul language. Also, KINGDOM has a humanist worldview focused on an ancient power struggle between two brothers. It never questions the morality behind China’s long history of all-powerful military dictatorships.

(H, B, P, LL, VVV, N, MM):
Dominant Worldview and Other Worldview Content/Elements:
Light humanist worldview mixed with some light moral, patriotic elements about how a “good” king running a provincial kingdom in Ancient China befriends a young soldier who helps the king defeat the king’s villainous brother when the brother stages a murderous coup (the story is based on the real provincial king in China and one of his greatest generals who later helped the king become the first emperor of a unified China)
Foul Language:
15 obscenities and no profanities
Violence:
Some extreme battle violence with blood mixed with lots of strong battle violence as armies and groups of men and soldiers, which includes two women, repeatedly battle one another over control of a provincial kingdom in Ancient China, with lots and lots of sword fighting and use of battle axes (people are stabbed, etc.), along with the use of platoons of archers (many soldiers are pierced by arrows during the battle scenes) (the hero is an expert swordsman who’s often able to perform amazing leaps as he fights), plus the villain’s soldiers are ordered to wipe out a whole village in one scene, but that event is not shown
Sex:
No sexual content in the movie (the original Japanese comic book on which the movie is based apparently does contain some romantic subplots)
Nudity:
Some upper male nudity
Alcohol Use:
No alcohol use
Smoking and/or Drug Use and Abuse:
No smoking or drugs; and,
Miscellaneous Immorality:
Brother betrays his half-brother, the king, a character mentions the idea of fate, the plot contains several power struggles (one powerful general, for example, may decide to tip the scales one way or another), two women become soldiers in the struggle between two armies, the hero sometimes relies on memories of his dead friend to give him strength, and two orphaned boys sold into slavery decide the only way to rise above their station in life is to become great military men, especially generals.

KINGDOM is a fictionalized historical epic from Japan about the first Emperor to unite China in 221 B.C. and the young general who helps him storm a provincial fortress when the Emperor’s half-brother stages a coup in the province from which the Emperor plans to establish his dynasty. KINGDOM does an amazing job detailing the many battles it takes to restore the Emperor to his provincial throne, but it contains some extreme violence, lots of fighting and some obscenities, and has a humanist worldview focused on a power struggle between two brothers vying for a secular kingdom.

The movie opens in 255 B.C. with two orphans, Xin (“Sheen”) and Piao, being sold as slaves to a farmer and his wife. The two boys dream of becoming great military generals, because joining the military was the only way for slaves to improve their lot in life. So, the two boys start practicing sword fighting using only tree limbs as weapons.

Ten years later, the boys are proficient at fighting. One day, the head advisor of the King of the Qin (“Cheen”) Province comes to the farm and takes Piao away to serve the King. Months later, Piao shows up one night mortally wounded. He tells Xin that it’s now up to him alone to become the great military general they aspired to be as children. He gives Xin a message to take to the next town. Before he dies, he tells Xin that he will be there with Xin in spirit, come what may.

Xin sneaks out of the farm, but he’s trailed by an assassin, the man who dealt Piao the fatal blow. On the outskirts of the next town, Xin comes upon a fancy hut, where he finds Piao’s exact double, a man who turns out to be the King of Qin Province. The King, whose name is Zheng, had used Piao to dupe the assassin, who had been sent by Zheng’s corrupt half-brother, who has staged a coup against Zheng. Just then, the assassin appears, and Xin promises King Zheng he will kill him after he kills the assassin because Zheng is the reason Xin’s friend, Piao, is dead.

Defeating the assassin turns out to be more difficult than Xin realized, but, after an intense fight, Xin manages to kill him. Instead of killing the King as he promised, however, the King convinces Xin to help him win back his throne from the King’s evil brother. After all, the King’s brother is the real reason Xin’s friend is dead.

Thus, begins a long journey to the fortress where King Zheng’s brother is running the kingdom. To successfully assault the fortress, however, Zheng, Xin and a small group of Zheng’s followers need many more soldiers. Zheng decides to make an appeal to the mountain clan for help, even though the previous rulers of Qin Province came to look down upon the clan. Will the mountain chieftain agree to help?

Spectacularly photographed and designed, KINGDOM is a rousing epic tale from Japan based on Chinese history. Zheng’s goal is to unite all the provinces and fiefdoms in China into one country, and KINGDOM uses a somewhat fictionalized story to tell the first part of Zheng’s campaign. Strangely, it’s based on a popular Japanese “manga” style comic book, which was made into a 77 episode animated series on Japanese television.

KINGDOM holds the viewer’s interest throughout, but some battle scenes are repetitious or could be shorter. The movie has a several nice twists that propel the plot.

MOVIEGUIDE® advises extreme caution for KINGDOM, however, because of its frequent battle scenes, some of which contain extreme violence, and some foul language. Also, KINGDOM has a humanist worldview focused on a power struggle between two brothers of noble blood vying for a secular kingdom. The story shows how the “good” brother becomes friends with the young soldier who eventually will become one of the brother’s greatest generals. As such, the story includes popcorn portrayals of several historical figures who were important figures in the campaign to unify China from about 245 B.C. to 221 B.C. under a provincial king who’s now recognized as the first Emperor of China, who reigned for 11 years until his sudden death. The history behind the movie is fascinating. For instance, Emperor Zheng unified several diverse provincial walls into the Great Wall of China. However, the movie is designed as an entertainment rather than a bonafide history lesson. It’s important to note that the filmmakers never question the morality behind China’s long history of all-powerful military dictatorships, which currently is represented by the “socialist market economy” controlled by China’s atheist communist party and its top leaders.