"Transformed by Love and Compassion" 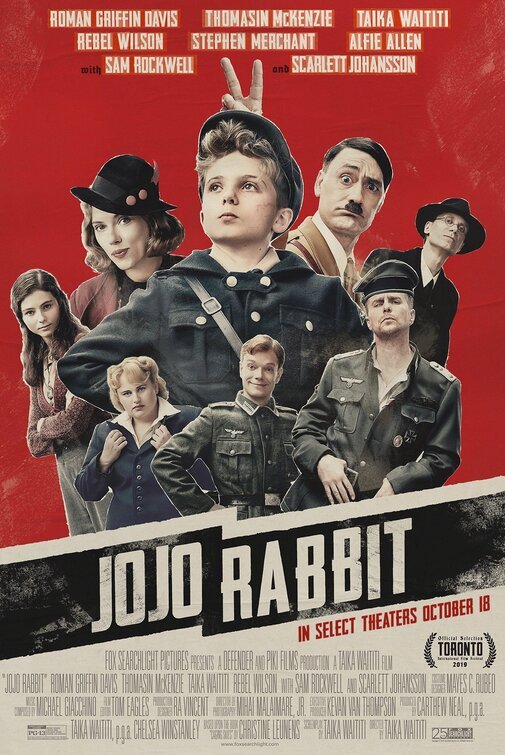 JOJO RABBIT is a quirky satire about a young boy’s growth from being an Anti-Semitic member of the Hitler Youth during World War II to being a better person. The movie opens with Johannes aka JoJo’s imaginary friend, Adolph Hitler giving JoJo a pep talk prior to going to his first camp as a member of the Hitler Youth. When JoJo doesn’t have the heart to kill a rabbit, the boys call him “JoJo Rabbit.” A grenade accident scars the left side of JoJo’s face and leaves him with a limp. JoJo discovers his mother secretly works with the Resistance and is hiding a teenage Jewish girl in their attic. When tragedy suddenly changes everything, JoJo must decide whose side he’ll take.

Despite its funny satire, JOJO RABBIT becomes a very moving experience as the boy interacts with the Jewish girl and rediscovers his humanity. Essentially, JoJo is transformed by love and compassion. That said, there’s some humanist, existentialist philosophy in JOJO RABBIT. The movie also contains lots of PG-13 foul language and strong violence. So, MOVIEGUIDE® advises extreme caution for JOJO RABBIT.

(C, B, H, P, LL, VV, A, D, M):
Dominant Worldview and Other Worldview Content/Elements:
Light redemptive, moral worldview, marred by some humanist existentialist sentiments, plus American soldiers drive through German streets while waving American flags at the end of World War II
Foul Language:
12 obscenities (including one “f” word), four GD profanities and six light exclamatory profanities
Violence:
Strong violence (no extreme violence and some off screen) includes explosion, boy accidentally sticks his leg with his knife, boys carrying RPG accidentally set it off, and the grenade hits a building, people fire rifles and machine guns battles, executions take place off screen, mother and boy come across six people who’s been hanged, and mother turns her son’s head away, boy finds out someone he knows and loves has been hanged, and he grabs their dangling feet as he cries, boy finds himself in the midst of a battle between German and Russian soldiers in the streets of his hometown, boy’s face is accidentally scarred by an explosion, and an imaginary Adolf Hitler with a dried bullet wound in his head visits a 10-year-old boy after boy heard that Hitler had committed suicide
Sex:
No sex, but 10-year-old boy tells teenage girl he loves her, but she admits she just loves him like a brother
Nudity:
No nudity
Alcohol Use:
Brief alcohol use
Smoking and/or Drug Use and Abuse:
Brief smoking but no drugs; and,
Miscellaneous Immorality:
Lying and Anti-Semitic content but rebuked, plus Nazis invoke God in one scene.

JOJO RABBIT is a quirky satire about a young boy’s growth from being an Anti-Semitic, gung ho member of the Hitler Youth during World War II to being a better person when he finds out his mother is hiding a teenage Jewish girl in their attic. Despite the satire, which includes scenes where the boy interacts with a child’s imaginary vision of what Adolf Hitler is like, JOJO RABBIT becomes a very moving experience as the boy interacts with the Jewish girl and rediscovers his humanity, but the movie has a lot of PG-13 foul language and some violence. So, MOVIEGUIDE® advises extreme caution.

The movie opens with 10-year-old Johannes aka JoJo and his chubby friend, Yorki, excited about attending their first Hitler Youth camp in the wilderness. JoJo’s imaginary friend, a naïve child’s version of Der Fuhrer, Adolph Hitler, gives JoJo a crazy pep talk, which has JoJo screaming as he exits his house.

The Hitler Youth camp is run by a disillusioned disabled German soldier with an injured right eye, Captain Klenzendorf. During his quirky introduction to the boys, the Captain admits Germany is losing the war.

Later, two of the older boys ask the other boys if they’re prepared to kill for Hitler. Of course, all the boys say yes, including JoJo. One of the older boys picks JoJo out of the group and orders him to wring the neck of a bunny rabbit. To his credit, JoJo can’t bring himself to kill the rabbit, and he runs off into the woods with all the other boys screaming, “JoJo Rabbit.”

In the woods, JoJo has a talk with his imaginary friend, Hitler, who tells JoJo that killing a rabbit is no big deal. In fact, he tells JoJo that rabbits are among the most courageous animals in the forest because every animal and every human being is after them. Hitler reminds JoJo that, in the beginning, everyone was against him and thought he was the crazy one.

Hitler gives JoJo another screaming pep talk. Then, as the other boys are practicing how to throw a grenade, JoJo and Hitler run screaming through the camp. JoJo picks up one of the grenades and throws it, but the grenade hits a tree and bounces back to him. Hitler runs away as JoJo lets out an epithet. A longshot shows the explosion, and the movie cuts to JoJo in the hospital with his mother. The movie shows that the explosion has left a crazy scar on JoJo’s cheek and left him with a limp. JoJo is depressed, but his mother comforts her son and tries to pick up his spirits.

Meanwhile, because of the accident, Captain Klenzendorf has been demoted to work in the local propaganda office. He doesn’t hold this against JoJo, however. In fact, he’s taken a liking to JoJo, and JoJo starts running errands for the office.

One day, JoJo hears some noises in the attic. He discovers that his mother, who often playfully argues with her son about the evils of the Nazi Party and Hitler, is letting a teenage Jewish girl named Elsa hide in the attic above the bedroom of JoJo’s late sister, who died. Elsa manages to steal JoJo’s special Hitler Youth knife and threatens him not to alert the authorities about her. She reminds JoJo that, if he tells on her, they will take his mother away and lock her up in a concentration camp. Elsa also orders JoJo not to tell his mother that he knows about her.

JoJo is cowed by Elsa at first, but then he surmises that, if he did tell his mother he knows about Elsa, his mother just might throw Elsa out into the street to protect her son. We’ve got a Mexican standoff, JoJo tells Elsa.

As the days pass, JoJo asks Elsa what Jews are really like. She fills his head with a lot of nonsense, which he then writes down in a book he’s writing titled, “Youhoo Jew.” JoJo also discovers that his mother is part of the Resistance, as is his father, who was supposed to be out fighting the war.

When a tragedy suddenly changes everything, JoJo must decide whose side he’ll take.

Despite all the satire, JOJO RABBIT becomes a very moving experience as the boy interacts with the Jewish girl and rediscovers his humanity. Eventually, JoJo must overcome tragedy and danger while he’s being transformed by love and compassion. Also, in the end, JoJo realizes Hitler is just a hateful coward. Hitler’s cowardice is contrasted with the courage of Captain Klensendorf, who realizes JoJo’s mother is a member of the Resistance, but doesn’t tell anyone. In one of the movie’s most poignant scenes, he tells JoJo that his mother was “a good person, a really good person.” Happily, this scene isn’t the only touching, highly emotional scene in the movie. There are several others that will leave an indelible mark on viewers.

Even though JOJO RABBIT ends on a happy, redemptive note, the filmmakers make several positive references to the acclaimed German poet Rainer Rilke, a left-wing, existentialist artist who rejected the Deity of Jesus Christ. The movie ends with a passage from Rilke, “Let everything happen to you, beauty and terror. Just keep going. No feeling is final.”

JOJO RABBIT also contains plenty of PG-13 foul language and strong violence. The more extreme and gory violence actually occurs off screen or from a distance, such as the explosion that scars JoJo’s face.