"A Plea for Mercy" 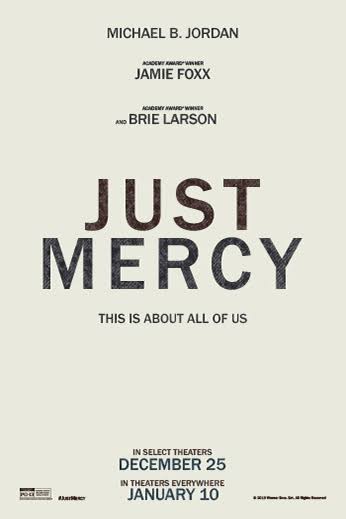 JUST MERCY takes place in Monroeville, Alabama, where an African-American lawyer out of Harvard Law makes it his mission to help those who can’t help themselves. Bryan Stevenson pairs up with a local advocate, and together they begin the Equal Justice Initiative. Not wasting time, he takes on many clients on death row, studying their cases and working tirelessly to appeal. One case grabs his attention is that of Johnny D. McMillian, a black man on death row for allegedly raping and killing a young white woman. The only solid evidence against him is the testimony of one white man, who’s also on trial for murder. Bryan is determined to prove Johnny’s innocence.

JUST MERCY is absorbing and emotionally powerful, successfully tugging at the viewer’s heartstrings. The performances grab and hold the viewer’s attention throughout the movie. JUST MERCY has a strong Christian, moral worldview. There is an ongoing fight for justice and mercy, and a constant appeal to God for guidance and support. However, there’s too much PG-13 rated foul language and mature elements. So, MOVIEGUIDE® advises extreme caution for JUST MERCY.

(CCC, BBB, LLL, VV, S, N, D, MM):
Dominant Worldview and Other Worldview Content/Elements:
Very strong Christian, moral worldview with biblical themes centers on mercy and justice and grace, main characters are fighting for what’s right and quit at nothing to achieve it, good triumphs over evil, men discuss how they used to play piano and sing in church when they were boys and proclaim together “God is good,” man sings a hymn praising God when he’s dealing with a difficult time, a man has a Bible in his jail cell and requests a church hymn as his last song before being executed and asks for prayed, and one scene in church with everyone praising and praying
Foul Language:
33 obscenities and one GD profanity, plus five racial slurs
Violence:
Strong and light violence includes a man is violently slammed against his truck, news reports say a woman was found raped and shot, but it’s never shown, man recalls his father was murdered, a man is executed by electric chair, but only a jolt is vaguely shown in glass reflection, a few rough tussles with officers and civilians, but no blood
Sex:
No sex scenes, but a man is known to have cheated on his wife
Nudity:
Upper male nudity when a man is strip searched by a jail guard and is shown in his underwear
Alcohol Use:
No alcohol use
Smoking and/or Drug Use and Abuse:
One main character is shown smoking a cigarette multiple times; and,
Miscellaneous Immorality:
Strong miscellaneous immorality includes major themes about racism and government corruption throughout the entire movie, people in power abuse it greatly with bias and bigotry, many people are coerced into lying or giving false testimony or threatened with their jobs or wellbeing.

JUST MERCY is based on the book written by African-American lawyer Bryan Stevenson, telling his story about fighting for justice in a town that doesn’t even know the meaning of the word. In 1987, a black man named Walter “Johnny D.” McMillian was a hardworking man in Monroeville, Alabama who owned his own company cutting down trees. Driving home one night, he’s stopped by police officers who immediately arrest him, accusing him of a heinous crime.

Bryan Stevenson is a young, ambitious lawyer who’s just finished law school, with a fiery desire to help the poor and needy. Although his mother warns against it, Bryan moves to Alabama in 1988 to start a non-profit organization. He’s teamed up with another ambitious advocate named Eva, who sees Bryan as the right person. Together, they immediately begin working on the cases at hand.

Bryan visits the local prison, interviewing the inmates who had little to no representation when on trial, and who were mostly told to accept the plea bargain even without committing the crime. Soon, he meets Johnny D., who has had enough of these lawyers who come in and say they’re going to help him. The last one, he says, took all the money his family has and then was never heard from again. Bryan tries to assure him he’s not the same as the others, but Johnny D. needs some convincing.

Bryan soon goes to visit the McMillian family, being welcomed into a small home, as everyone tells their stories. He learns that, on the day of the accused murder, Johnny D. was working on his truck with his son, and then later was having a cookout with his family. Many people were there, many saw him from dusk till dawn, yet none of their testimonies were used or acknowledged during the trial. Bryan has his work set out for him.

Bryan and Eva begin to re-interview everyone involved in the case from years before, but not before running into trouble. One of their key witnesses is soon arrested for perjury, simply because his statement directly contradicts the testimony presented in the case. They find the officer who was the first responder to the murder and find that what he found directly contradicts what the state’s witness said. Bryan has to find this man who was the sole testimony that resulted in the conviction of Johnny D.

Bryan is soon sitting across the table in a jail visiting center from Ralph Myers. Ralph was also convicted of a crime right around the time Johnny D. was, and it just so happened that Ralph was taken off death row and had a sentence reduction after offering his testimony against Johnny. Bryan believes that the evidence he has is overwhelming, but the town of Monroeville, Alabama, has a different point of view. The D.A. refuses to reconsider at the case, and Bryan is forced to appeal in the hope that a retrial will prove the innocence of this man.

Johnny’s case just scratches the surface of the amount of injustice that has occurred in this system. Ironically, everyone in the town continues to tell Bryan he must visit the Mockingbird Museum, a museum dedicated to Lee Harper, the author of TO KILL A MOCKINGBIRD who was born in Monroeville and based her novel on her experiences in the town. Even the D.A. is tremendously proud of this, even though he refuses to reconsider Johnny’s apparent wrongful conviction.

JUST MERCY is absorbing and emotionally powerful, greatly tugging at the viewer’s heartstrings. It teaches that everyone needs some grace and mercy and that “hopelessness is the enemy of justice.” All the performances in this movie bring great truth and grab the viewer’s attention.

However, like many other great movies this year, JUST MERCY has plenty of foul language, including one strong GD profanity. There are no “f” words, however. MOVIEGUIDE® advises extreme caution for the amount of foul language and for some mature thematic elements in JUST MERCY.