"Sacrifice Under the Deep Blue Sea" 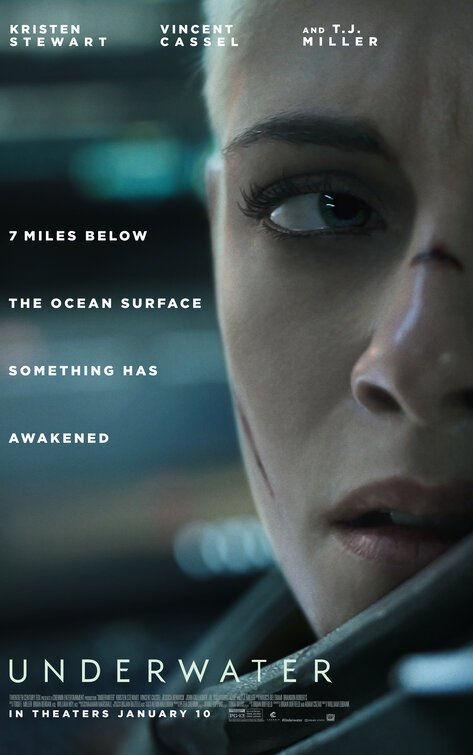 UNDERWATER is a horror thriller starring Kristen Stewart. She plays Norah, a brave mechanical engineer who joins a small band of survivors when part of an extensive deep sea drilling operation is partially destroyed by some underwater sea monsters. Norah and five other survivors must make their way to a transport rig and take it down to the ocean floor 6.9 miles below the surface. When they reach the ocean floor, they must use fancy undersea diving suits to walk about two miles to an abandoned oil drilling facility that may have some working escape pods. However, can they make it past the undersea monsters stalking them?

UNDERWATER is an intense, scary undersea thriller and monster movie. It’s a little derivative, however, of the original ALIEN movie and not as well-made. The good news, though, is that UNDERWATER is both a tale of survival and a redemptive story of sacrifice. The movie’s moral, redemptive worldview, however, is marred by lots of foul language and some gruesome deaths. So, MOVIEGUIDE® advises extreme caution for this content and the scares generated by UNDERWATER.

(BB, C, LLL, VVV, N, M):
Dominant Worldview and Other Worldview Content/Elements:
Strong moral and redemptive, but scary, tale of survival and sacrifice
Foul Language:
About 23 obscenities (mostly “h” and “s” words but including two “f” words), five strong profanities (four GDs and one Jesus profanity), nine light profanities (mostly OMG)
Violence:
Very strong violence involving a couple of gruesome undersea deaths and lots of intense jeopardy and violence involving walls and floors of massive deep sea facility implode and buckle around people, scary undersea monsters with scary-looking pointy teeth stalk six survivors and eventually try to attack the survivors, many narrow escapes, people get injured and sometimes die
Nudity:
Brief upper male nudity and lead female character wears a sports bra or halter top and shorts in some scenes when she’s not wearing a fancy, bulky deep sea diving suit
Alcohol Use:
No alcohol use
Smoking and/or Drug Use and Abuse:
No smoking or drugs; and,
Miscellaneous Immorality:
Two survivors have to close an undersea safety door to a safe room on a bunch of other people when it becomes clear the other people will not make it.

UNDERWATER is a horror thriller starring Kristen Stewart, who plays a mechanical engineer working on an elaborate underwater drilling operation in the deepest part of the Pacific Ocean that starts falling apart when it’s attacked by some kind of underwater sea monsters. Though somewhat derivative and lacking greatness, UNDERWATER is a pretty intense and scary but redemptive tale of survival and sacrifice that’s marred by frequent foul language and some gruesome deaths.

The movie opens on one of the extensive drilling operation’s living quarters six miles down into the Marianna Trench of the Pacific Ocean, which is the deepest section of all of the oceans on Earth. Norah, a mechanical engineer, is brushing her teeth in a communal restroom. She sees a Daddy Long Legs spider in the sink, and she carefully scoops it up with a paper towel and places it on the tile away from the sink.

After brushing her teeth, Norah goes out into the hall when, suddenly, the walls of the facility behind her start exploding and buckling. She runs down the hall knocking on everyone’s door to wake them up and warn them. However, when she gets to a safer room in a corner section of the facility where a computer nerd named Rodrigo is working, they have to shut the safety door when the whole section behind them collapses onto the other people also trying to get to the room.

Norah and Rodrigo try to make it to the facility’s escape pods. Along the way, they have to shimmy their way through a collapsed section, where they discover another worker, a man named Paul. Eventually, all three of them make it to the escape pod area, where the Captain, Lucien, has already sent out all the available escape pods. Two other workers have made it out alive, Norah’s friend named Liam, and his fiancé, Emily. Liam was her husband’s best friend, but Norah’s husband has died.

Captain Lucien informs them that the facility’s escape submarine and communications have been destroyed. He tells them their only option is to make their way to a nearby transport rig, take the rig to the ocean floor, and don their pressurized diving suits to walk to an abandoned drilling facility called Roebuck a couple miles away. Hopefully, they can get the communications equipment there working and maybe even find some available escape pods.

However, as they start their perilous journey, they begin to realize they aren’t alone, that something is stalking them as they make their way to the transport rig. Will any of them survive?

UNDERWATER is an intense, scary undersea horror thriller. Eventually, it also becomes a monster movie. Though it’s a little too reminiscent of the classic original ALIEN movie and doesn’t have quite the same panache, it manages to scare up some unique chills and thrills. That said, a big problem with the movie is that viewers never quite get a good look at the monsters attacking the undersea heroes.

The good news, though, is that UNDERWATER turns out to be both a scary adventure tale of survival and a redemptive story of sacrifice. The little band of undersea heroes starts looking out for one another and makes superhuman efforts to safe their companions, to the point of being willing to sacrifice their own lives.

However, UNDERWATER has lots of foul language and a couple gruesome deaths. So, MOVIEGUIDE® advises extreme caution for this content and the scares generated by the story.