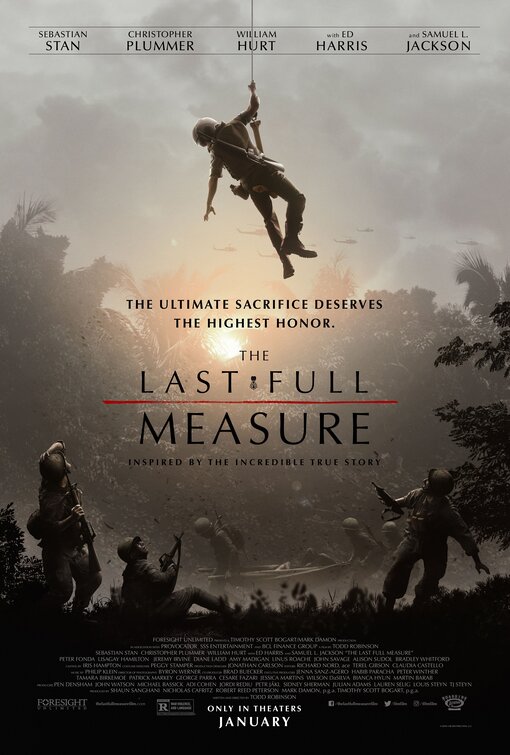 THE LAST FULL MEASURE tells the true story of Airman William Pitsenbarger, who died during the Vietnam War. American soldiers from the First Infantry Division become pinned down due to faulty air support coordinates. This allows the Viet Cong to overrun their position. Instead of leaving with the last helicopter, William chooses to stay and save the lives of more than 60 men before making the ultimate sacrifice himself. Years later, in 1999, a Pentagon staffer is assigned to investigate whether William deserves a posthumous Congressional Medal of Honor for his bravery.

THE LAST FULL MEASURE is more like a drama about Vietnam vets suffering from PTSD than a war movie. It has a few touching, emotional moments, but the story moves too slowly. Also, the war scenes feel disjointed because viewers only see small vignettes of what happened. Some very violent, gory war scenes recalling William's heroic actions during the battle are intercut with scenes detailing the 1999 investigation about the Medal of Honor. MOVIEGUIDE® advises extreme caution for the foul language and extreme violence in THE LAST FULL MEASURE.

(B, FR, PP, C, LLL, VVV, N, D, M):
Dominant Worldview and Other Worldview Content/Elements:
Light moral worldview where the truth is uncovered and the right thing is done, a man prays to an Eastern god, lots of American flags in scenes and some scenes focus on service to country and sacrifice
Foul Language:
31 obscenities, 11 profanities, a man shown at a urinal from behind, and a soldier vomits
Violence:
Some very strong war violence with lots of blood and images of open wounds include a Vietnamese soldier’s intestines are shown hanging out, people are blown up, people are shot in the head, and gun battles
Sex:
No sexual content
Nudity:
Some soldiers are shown shirtless
Alcohol Use:
No alcohol use
Smoking and/or Drug Use and Abuse:
Brief smoking; and,
Miscellaneous Immorality:
Blackmail, co-workers threaten others for personal gain, and a conspiracy occurs to cover up the truth.

THE LAST FULL MEASURE tells the true story of Airman William Pitsenbarger, who was dropped into the middle of Operation Abilene during the Vietnam War. American soldiers from the Army’s 1st Infantry Division become pinned down due to faulty air support coordinates. This allowed the Viet Cong to overrun their position. Instead of leaving with the last helicopter, Pitsenbarger chose to stay and save the lives of more than 60 men before making the ultimate sacrifice himself.

Thirty-two years later, Pentagon staffer Scott Huffman is reassigned from an important project to investigate Pitsenbarger’s story when a request is made to award him a Congressional Medal of Honor posthumously. Huffman is a cut-throat lawyer on the fast track to the top and is perturbed about his reassignment. He sets out across the globe to track down Pitsenbarger’s war buddies who witnessed his heroic actions. Scott’s attitude toward his assignment slowly softens as he sees the effect the Vietnam War has had on these vets.

Huffman is particularly moved during a visit with William Pitsenbarger’s parents, where he learns the hero’s father is terminally ill with cancer and only has a short time to live. His mission to get congressional support for the medal becomes more critical as time runs out. Meanwhile, Huffman uncovers a nefarious plot that kept William from receiving the medal decades earlier, but he puts his career on the line to expose it.

In the midst of his investigation, Huffman makes friends with the vets and helps them confront their PTSD. Little did he know that, when he started this whole journey, his own life would be forever changed by William Pitsenbarger’s actions in the Vietnam jungles far away and long ago.

While it looks like a war movie at first glance, THE LAST FULL MEASURE focuses more on the survivors of the battle who witnessed the heroic actions of Pitsenbarger. Thus, it spends most of its time in the year 1999. There are some very violent war scenes that recall Pitsenbarger’s actions during the battle, but those are intercut with scenes in the main storyline where Huffman travels across the world to gather info for his investigation.

Although it has a few very touching, emotional moments, THE LAST FULL MEASURE is more about the PTSD suffered by forgotten Vietnam vets. Sadly, the movie moves at a very slow pace. Also, the movie’s war scenes feel a bit disjointed because the filmmakers drop in and out of the battle randomly and only show small vignettes of what occurred.

Thus, THE LAST FULL MEASURE is more like a drama with some elements of a war movie, and it feels about thirty minutes too long. As a way to tell the story of a war hero, this is a very odd choice and not necessarily the most impactful.

Given that soldiers and military life are prone to foul language, especially in the heat of battle or during emotional breakdowns, THE LAST FULL MEASURE contains lots of strong foul language. It’s only in the movie’s last 20 minutes or so, where things get more sentimental, that the movie leaves the foul language behind. The movie’s other major issue is violence, as expected with most modern war movies. Even though the war scenes play second-fiddle to the main storyline, the filmmakers go all out to make the war scenes as bloody and as gory as possible. The worst might be the intestines of a Viet Cong fighter hanging out. So, if you want a realistic representation of war, you’ll get that here.

MOVIEGUIDE® advises extreme caution for THE LAST FULL MEASURE because of the foul language and bloody violence. To its credit, the movie sides with the Vietnam vets, but the movie could have been more engaging.