"Pop Singer Slides off the Rails" 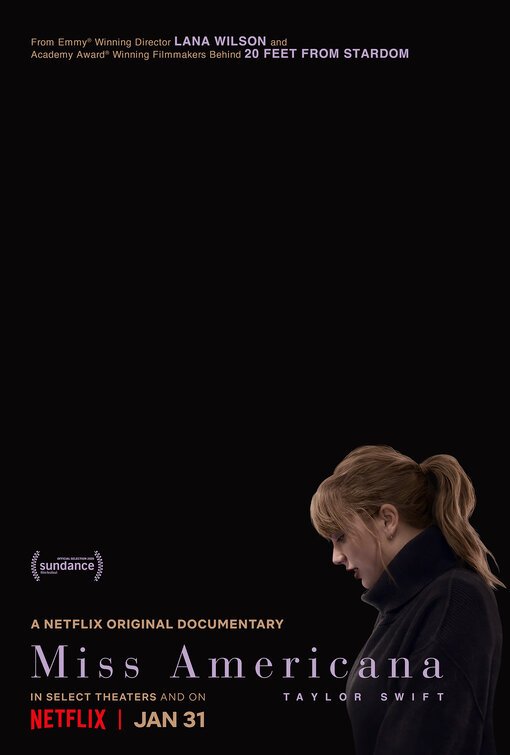 MISS AMERICANA depicts pop music icon Taylor Swift’s life from early childhood until now. The movie opens with the singer talking about her diaries and early childhood life. The audience gets a look at old home videos where Swift was singing and just starting to embark on her journey to stardom. Intertwined with the home videos are interview snippets with Swift and footage from her current life and past concerts during the last 10 years. The documentary also discusses her conflicts with rap star Kanye West, her mother’s cancer diagnosis and her political beliefs on LGBT issues.

MISS AMERICANA is a thoughtful depiction of Taylor Swift’s life until she decides to get political in 2018 and slams a Republican senator. When the tide turns and she starts to speak her mind, she conflates her Christian upbringing with her progressive politics. Ultimately, the movie promotes a Romantic, politically correct, perverse worldview. That said, MISS AMERICANA is easy to follow and shows the audience an inside look into Taylor Swift’s songwriting and performing. However, the movie contains lots of foul language, including some “f” words.

(RoRo, PCPC, HoHo, AbAb, C, B, Fe, LLL, V, S, A, M):
Dominant Worldview and Other Worldview Content/Elements:
Strong Romantic, politically correct worldview where famous pop singer Taylor Swift comes out as a liberal activist and slams Christian conservative Tennessee Senator Marsha Blackburn, who disagrees with Swift, and Swift panders to LGBTQ causes and showcases a homosexual kiss while saying that the whole world “needs to calm down” when it comes to LGBTQ issues, but Swift is shown placing a Christian value on family and friends and on being kind, plus there are some light feminist elements where Swift complains about double standards when it comes to men and women
Foul Language:
33 obscenities (including some “f” words) and 14 mostly light profanities (almost all were OMG)
Violence:
Pop singer discusses a 2013 sexual assault case where a radio DJ allegedly touched her rear end under her skirt during a publicity photo shoot and the process of getting it adjudicated (DJ sued her for getting him fired from his job but Swift countersued and won)
Sex:
Pop singer discusses 2013 sexual assault case
Nudity:
No explicit nudity but skimpy outfits worn during concerts that showed woman’s legs, bare midriffs and one instance with short shorts worn
Alcohol Use:
Four instances of drinking casually or with dinner
Smoking and/or Drug Use and Abuse:
No smoking or drugs; and,
Miscellaneous Immorality:
Lots of instances where the mass media gossips about pop singer’s and what they think she’s doing and what is wrong with her, and a hostile attitude from other celebrities about her and her work.

MISS AMERICANA depicts pop music icon Taylor Swift’s life from early childhood, before her big break, to where she is now in her life. In the second half, Swift discusses her sudden liberal political activism in 2018. She says her Christian beliefs have led her to support same-sex marriage and oppose religious freedom when it comes to LGBT issues.

The movie opens with the singer talking about her diaries and early childhood life. The audience gets a look into old home videos where Swift was singing and just starting to embark on her journey to stardom.

Intertwined with the home videos is footage of Taylor now in her life and past concerts over the last 10 years. Through this footage, viewers get to see when she hit it big with her first album at 16, and all of the awards she won. Swift says that she has just tried to be the “good girl” by entertaining others with her music. She never overstepped or gave her opinion because people didn’t want that. She also talks about how she found her happiness in her music and in being praised by those who loved it. For so long she says, she was fulfilled by the approval of fans and critics liking her music.

All of the footage leads up to a turning point in her career at the 2009 MTV VMA Awards. At the awards, Kanye West stopped her in the middle of her speech for winning the video of the year award. He used this moment to highlight another artist whom he thought should have won. She says this moment sent her down many emotional paths, not all of which were good.

One of the things that ultimately helped her turn her focus to something other than winning awards was her mother’s cancer diagnosis. Watching her mother go through her treatments made her realize that she needed to tune out the media and what everyone was saying about her to focus on her family. She decided to stop sweating the small things in life so she could spend more time with her family and friends.

This all changed again when West, who already spoke his mind about her, released a song calling Swift a horrible name. When she spoke out, she received tons of hate, so she hid for an entire year where no one saw her.

When she emerged again, she was thrust into a court case for a sexual assault that happened to her earlier in her career. In 2013, a radio DJ during a concert tour photo shoot allegedly groped her buttocks under her skirt. She reported the incident to his radio station, which soon fired the man, but later he sued Taylor for destroying his career, and she countersued. After she won the case, she decided that next time something like this, or another hot topic issue was up for debate, she had to know where she stood and what she believed so she could speak her mind.

All the experiences she went through leads up to the 2018 primary election in her home state of Tennessee. This is where the movie takes a complete 180, and viewers see what went into her decision to start speaking her mind politically. She begins to drift from the Christian Truth of her childhood and slams Republican Senator Marsha Blackburn, who is a Christian, because Blackburn doesn’t support same-sex marriage and other LGBT issues. Swift also claims (falsely it turns out) that Blackburn doesn’t want to protect women from domestic abuse and stalking, because Blackburn opposed a Democrat Party bill.

Until it gets overtly political, MISS AMERICANA is a thoughtful depiction of Taylor Swift’s life. When the gets upset about Senator Blackburn’s 2018 campaign and starts speaking her mind, she conflates her Christian upbringing with her politically correct, liberal beliefs.

That said, MISS AMERICANA is easy to follow and shows viewers what really goes into Taylor Swift’s songwriting and performing. The movie also shows that friends and family are two of the most important things in her life. It also discusses issues such as self-worth, body image and coping with adversity.

Sadly, though, MISS AMERICANA also has lots of foul language, including some “f” words. It also contains references to a lawsuit by a radio DJ who got fired from his job after she complained to his radio station in 2013 that he groped under her skirt during a concert tour promotion. Taylor countersued and eventually won the two lawsuits in court.