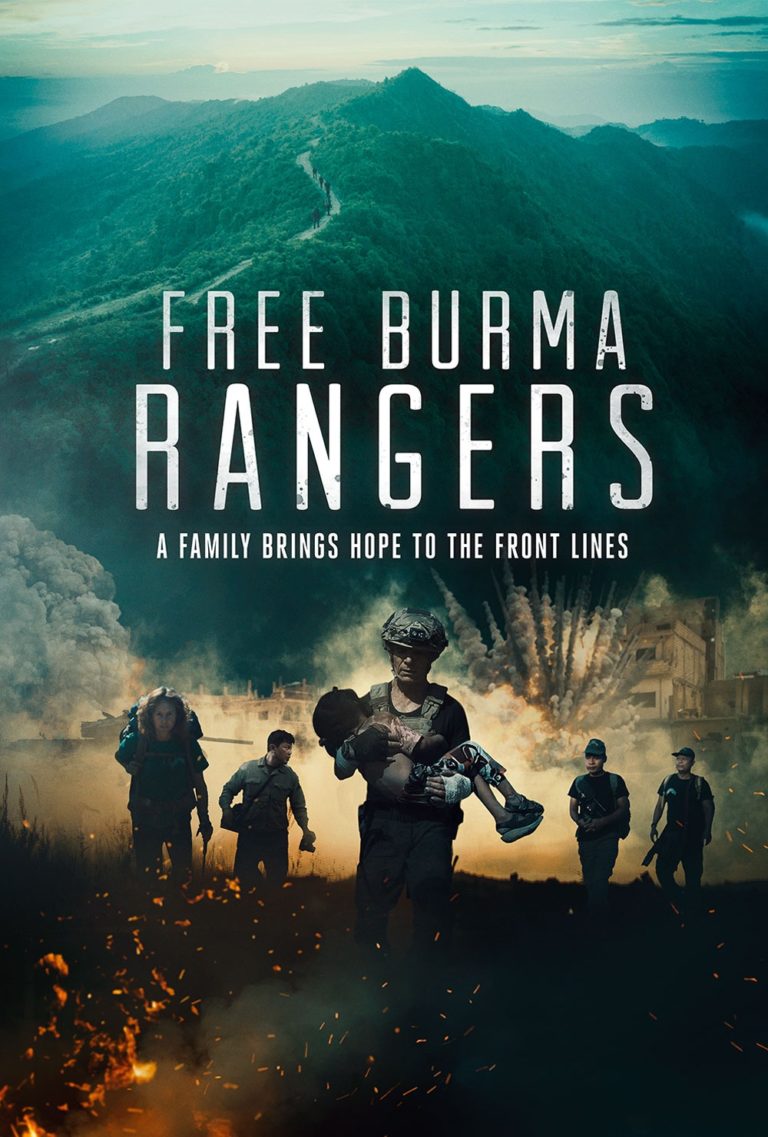 (CCC, BBB, VV, N, D):
Dominant Worldview and Other Worldview Content/Elements:
Very strong Christian, biblical worldview about following God’s calling to serve others in need, the value of forgiving those who hurt you, loving your enemy even though it’s hard, surrendering the desire for vengeance to God, submitting oneself to God’s will when crisis comes into play, prayer depicted, a bold declaration that “Jesus is love,” several instances where characters bless others in the name of Jesus and rebuke demonic forces at work, character recounts a dream of Jesus coming to help protect, hope in Jesus mentioned, Jesus depicted, baptism depicted, Bible verses mentioned and lived out, plus a quick mention of one Muslim when the rangers are in Iraq
Foul Language:
No foul language, one heck
Violence:
Strong violence, terrorists attack unarmed people with guns (not always depicted), people get injuries that last for several days and must be taken care of by medics, graphic descriptions of war violence, character tells a story about men slitting pregnant women’s throats and killing their children, terrorist organization tries to blow up a family as they evacuate, weapons seen firing, tanks used as both protection and a means of destruction, and it’s implied that terrorists rape innocent women and then beat them to death (not depicted), but photos are shown of their corpses in order to motivate the rangers to end the injustice
Sex:
No sex but a married couple kisses on the lips
Nudity:
Young boy and girl depicted without their shirts, one young girl seen jumping into a body of water in only her underwear
Alcohol Use:
No alcohol
Smoking and/or Drug Use and Abuse:
Teenage boy smokes a cigarette during a stressful situation; and,
Miscellaneous Immorality:
Nothing else objectionable.

FREE BURMA RANGERS is a gut-wrenching documentary about an American family, the Eubanks, who serve as missionaries in the face of foreign civil war. The movie beautifully captures how the saving love of Jesus Christ can lead Christians to serve those in need, even when the circumstances seem insurmountable. In short, FREE BURMA RANGERS is excellent and will invigorate Christians with the power of the Gospel. However, for all its praiseworthy elements, MOVIEGUIDE® advises caution for conversations and depictions of war violence.

FREE BURMA RANGERS begins with a sweet introduction from the founders of the Free Burma Rangers, Dave and Karen Eubank. The movie then showcases the rangers as they grapple with how to save a young girl behind enemy lines in Iraq.

Cut to a talking head of Dave Eubank. Dave narrates his life story while archival footage and photographs show his humble beginnings in Texas, then his move to Thailand when his parents became missionaries. In the 1990s, Dave left the military after serving for 10 years to pursue a calling to go to Burma and help with the civil war chaos there. Dave proposed to Karen, and after seeking wisdom from God, the pair got married and started their missionary work.

At first, Dave didn’t know where to begin. One day, he just followed a prompting and went to where some gunfire could be heard. There, he met Eilya who was a medic. The two men and Karen gather support and begin to train men for combat and organize teams to rescue the Burmese people who are under attack by the government’s dictators. At the same time, Dave and his team stress the importance of documenting all their findings to share with the world for help and awareness.

Dave and Karen call themselves and their teams, the Free Burma Rangers. According to their specifications, a ranger can be of any religious background but needs to have a courageous attitude and be willing to leave no man behind.

While Dave and Karen grow their mission work, they also grow their family and raise their three children, Sahale, Suuzanne [sic] and Peter. Dave and Karen take their children with them around the country, teaching them how to serve others in need, although there are risks. The three Eubank children speak about their parent’s ministry with adoration. It’s clear that Dave and Karen raised them to honor their parents and disciplined them because they love them. Karen and the children don’t go on any rescue missions but genuinely enjoy supporting Dave and the calling the Lord put on their family.

The portion on the Eubanks’ work in Burma ends when Dave and Karen fell a calling to go and help out the people of Iraq suffering from Isis. After praying about their decision, an hour later God confirms that it’s the right move for their family. The Eubanks know that Iraq is different from Burma, but even so, they face similar troubles. The movie continues to build off their story by showing the real dangers overseas that have affected their teams with loss.

Minutes later, filmmakers pick back up where the movie began with Dave and his team. A young Iraqi child is alive but blocked from an easy rescue due to her position. Through prayer and sheer willpower, Dave and his team make it to this young girl and save two others too. The movie ends with optimism in Jesus Christ and an encouragement that people can only conquer fear and evil with love.

FREE BURMA RANGERS is an extremely well-made documentary. The talking head interviews are beautifully woven together with onscreen action and heartfelt memories of the events. The music is also ethereal and transports audiences to the gravity of each sequence. Finally, Dave and Karen Eubank are extremely well-spoken and articulate when communicating their story.

FREE BURMA RANGERS maintains a very strong Christian, biblical worldview. Positively, Dave Eubank highlights how the Lord has worked within his group to bring glory to His name. Dave also doesn’t shy away from confessing his angry desire for vengeance at the injustice around him. God, however, convicts him that vengeance is God’s to dish out, not Dave’s. These sequences create a profound foundation for the documentary along with the movie’s examples of depicted prayer, kindness and service to those in need. FREE BURMA RANGERS merits some caution for descriptions and depictions of violence.