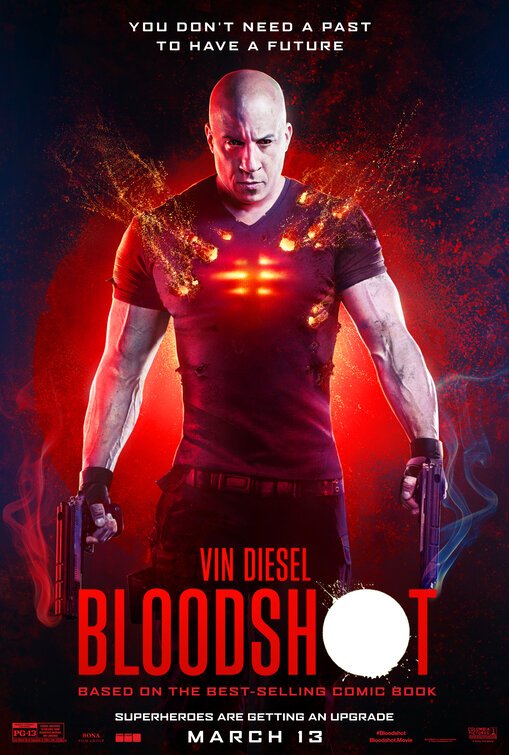 BLOODSHOT stars Vin Diesel as Ray, an American soldier who promises to track down and kill a terrorist leader after the terrorist murders Ray’s wife. The terrorist shoots Ray dead, however. Ray then wakes up in a fancy scientific facility run by a Dr. Harting. Harting informs Ray that the American military donated Ray’s dead body to the facility. Harting says he has re-animated Ray’s body by injecting them with millions of microscopic nanobots. The nanobots give Ray super strength. They also can regenerate his body. Eventually, Ray must stop a nefarious plot to manipulate him through the nanobots in his body and sell the nanotechnology to the highest bidder. Ray gets some help from two unexpected sources.

The crazy technology in BLOODSHOT is a little too fantastical. Even so, however, BLOODSHOT is an exciting science fiction thriller with a classic exploration of typical science fiction themes about identity, memory, technological manipulation, and freedom. BLOODSHOT also inserts some fun Christian, biblical references to Creation, Resurrection and Second Chances. MOVIEGUIDE® advises extreme caution, however, for frequent foul language and some excessive violence.

(BB, PP, CC, Ab, LLL, VVV, S, N, M):
Dominant Worldview and Other Worldview Content/Elements:
Strong moral worldview about a heroic but dead American soldier who’s been reanimated using nanobot technology and who must stop a nefarious plot to manipulate him to murder business rivals and sell the technology to the highest bidder, with some strong Christian, biblical references including references to Creation, Resurrection and Second Chances to redeem oneself, mitigated by some revenge motifs
Foul Language:
34 obscenities (including one “f” word), 12 strong profanities, one light profanity, at least one obscene gesture
Violence:
Some very strong and lots of strong violence includes pointblank shootings by pistols, rifles and automatic guns (some of the shootings are implied and take place offscreen), it’s implied man kills woman, bullet hits man in the face but he’s filled with nanobots who reconstruct his face as if nothing happened, assassinations, gunfights, explosions, man and woman kidnapped and tied up, chase scene, and three men fight intensely on top of two descending elevators outside a skyscraper and often fall and hang on for dear life
Sex:
Implied sex in one scene between man and wife after they kiss passionately on a bed
Nudity:
Upper male nudity and man’s wife is nude in bed but nothing explicit shown
Alcohol Use:
No alcohol use
Smoking and/or Drug Use and Abuse:
No smoking or drugs; and,
Miscellaneous Immorality:
Threats of revenge, lying and deceit, kidnapping, villain uses force to threaten a character to do his bidding.

BLOODSHOT stars Vin Diesel as an American soldier who, after being brought back to life by a scientist using nanotechnology, must stop a nefarious plot to abuse the soldier’s new superpowers and then sell the technology to the highest bidder. Though the movie’s technology is too fantastic, BLOODSHOT is an exciting science fiction thriller that explores some futuristic themes about identity, memory, technological manipulation, and freedom, with some fun Christian, biblical references to Creation, Resurrection and Redemption. MOVIEGUIDE® advises extreme caution, however, for frequent foul language and some excessive violence.

The movie begins with Vin Diesel as Ray Garrison, an American soldier who saves a hostage being held by terrorists in Mombasa, Kenya. Ray returns to his wife, Gina, and they enjoy a vacation in Italy, but Martin Axe, an Australian man working with the terrorists, kidnaps Ray and Gina. He threatens Gina’s life to find out who tipped off Ray and his men about the location of the hostage. Ray convinces Axe only Ray’s bosses know that information. Axe kills Gina anyway. Then, when Ray tells Axe he better kill Ray now because he’ll make sure he tracks down Axe and kills him for murdering his wife. “Thanks for the advice,” Axe tells Ray before pointing a gun at Ray and firing.

Ray wakes up in a fancy scientific facility run by Dr. Emil Harting. Harting and his beautiful female assistant, KT, inform Ray that the military donated Ray’s dead body to the facility and that Harting re-animated Ray’s brain and body by injecting his bloodstream with millions of microscopic nanobots. The nanobots, which can link to computers and other technology, have also enhanced Ray’s strength and senses. They also can regenerate his body.

Ray learns that Harting used the nanobot tech to replace KT’s damaged lungs (KT is herself an ex-soldier). Ray remembers his name but little else. However, KT assures Ray that his memories will slowly return to him.

Sure enough, after a day or so, Ray’s memory of the hostage rescue, his Italian vacation and his wife’s murder return. Of course, so does Ray’s hunger for revenge against Martin Axe. Consequently, he leaves the facility and uses the nanobots in his brain and their access to the Internet and satellites to track down Axe, who’s apparently part of a bigger organization that’s surrounded Axe with heavily armed bodyguards and mercenaries.

Ray attacks Axe’s five-car convoy in a tunnel in Budapest. An intense battle between Ray and Axe’s bodyguards ensues. At one point, after Ray dispatches nearly half of the bodyguards, it appears that they’ve killed Ray, but the nanobots revive him, and Ray’s attack takes up where he left off. In another scene, a bullet plows through Ray’s cheek, but the nanobots regroup and reconstruct Ray’s face. Ray soon kills all the bodyguards and applies the final shot to Axe, just as he promised.

Ray returns to Harting’s facility to get an energy boost for the nanobots in his body. At this point, a series of unexpected twists occurs. In quick order, the real villain is revealed, and Ray discovers he’s being manipulated through the nanobots. Ray then must go on the run to stop a dastardly plot to continue manipulating him and, eventually, sell the nanobot technology to the highest bidder. Happily, Ray gets some unexpected help from two sources, but can he and his two new friends defeat the resourceful villain and his henchmen?

The crazy technology in BLOODSHOT is a little too fantastical. It raises some questions that are never answered, such as how on Earth are the nanobots able to reconstruct Ray’s face? Even so, however, BLOODSHOT is an exciting science fiction thriller with a classic, even profound exploration of some futuristic issues about identity, memory, technological manipulation, choice, freedom, and the benefits and dangers of using powerful machines and technology to improve the human condition. Like the monster in FRANKENSTEIN movies or the genetically enhanced clones in the STAR WARS movies, Dr. Harting has transformed Ray into an even more powerful weapon. Will Ray be able to control his own destiny, or will he continue to be manipulated by outside forces? Also, is Ray still human?

Into these science fiction tropes, BLOODSHOT inserts some Christian, biblical references. For example, Ray gets help from Wigans, a supersmart black computer programmer who’s fond of making biblical references. At one point, Wigans says, “Let there be light,” as he turns on a lamp. At another point, he tells Ray he “went biblical” when he decided to “kill” Ray by stopping the nanobots and then reprogramming them so he can “resurrect” Ray and enable him to control the nanobots and stop the real villain and his henchmen. Finally, at the end of the movie, there’s a short discussion about getting a second chance to choose a better destiny for yourself. This discussion reminded MOVIEGUIDE® of the way God gives us a second chance through the Divine Person of Jesus Christ so we can repair our broken relationship with God.

Thus, there’s more going on in BLOODSHOT than just lots of thrills and action. Movie buffs will enjoy these science fiction conventions and biblical metaphors on multiple viewings of BLOODSHOT.

That said, MOVIEGUIDE® advises extreme caution for BLOODSHOT due to lots of foul language and some extreme violence. Also, there’s a sensual bedroom scene between Ray and his wife that includes some passionate kissing but cuts away before showing more explicit behavior.