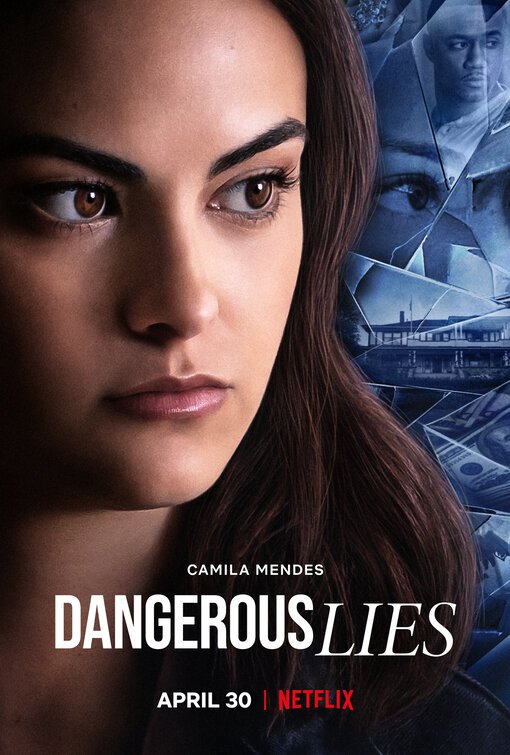 DANGEROUS LIES, a television movie on Netflix, takes place in Chicago. It follows a broke caretaker named Katie, whose patient mysteriously dies and leaves her a massive inheritance. This development catches the attention of the authorities, including a police detective, because Katie only knew her patient for four months. The incriminating evidence begins to pile up, and Katie begins to wonder who she can trust. She even questions her husband, Adam’s, motives.

DANGEROUS LIES has some great cinematography with striking visuals, good acting and worthwhile messages, but the script especially the ending are flawed. The slow story and poorly executed script create a jumbled narrative. As a result, the movie’s final twists seem unbelievable and silly. Happily, the movie has a strong moral worldview. It shows the consequences of dishonesty and violence while also stressing the importance of trusting the people you love and communicating the truth. There’s some mild humanism, however, where the central characters often look to themselves to solve their problems. Due to some violence and brief foul language in DANGEROUS LIES, MOVIEGUIDE® advises caution for older children.

(BB, H, L, VV, S, N, A, M):
Dominant Worldview and Other Worldview Content/Elements:
Strong moral worldview where deceit and violence lead to severe negative consequences, and trust and truth are stressed, marred by light humanist elements where characters are often motivated by money and look to themselves as a solution to a problem
Foul Language:
Two profanities (one use each of GD and OMG) and two light obscenities (a**, h***), one instance where a character says “jeez”
Violence:
Strong violence includes a diner gets robbed, and the man is violently shouting and pointing a gun at a man while holding a woman against her will, a man is shown to be shot and lying on the ground, and later it’s revealed he died, the gunshot wound is visible but far away, a character gets knocked out with a cast iron pan after two hits to the head, another character is hit in the back of the head and is knocked out, several people are shot multiple times in the chest and die shortly after, mild gunshot wounds and blood are shown, and a character finds a rotting corpse
Sex:
Married couple kisses passionately in the back of a car, and another scene briefly implies marital sex
Nudity:
Brief upper-male nudity as man gets out of shower
Alcohol Use:
Characters briefly drink beer to celebrate
Smoking and/or Drug Use and Abuse:
No smoking or drugs; and,
Miscellaneous Immorality:
The plot hinges on characters lying to one another.

DANGEROUS LIES, a television movie on Netflix, follows a broke caretaker named Katie, whose patient mysteriously dies and leaves her a massive inheritance, which catches unwanted attention from the authorities.

DANGEROUS LIES begins with a waitress named Katie as she serves her husband, who studies at a hole-in-the-wall diner. After taking a break from work to have an intimate moment with her husband, Adam, the couple walks back into the restaurant, and a robbery occurs. Adam motions for Katie to be silent after seeing that the busboy is lying on the ground, wounded. Adam sneaks up behind the perpetrator, disarms his pistol, tackles him to the ground and knocks him out with a cast iron pan.

Cut to four months later. Katie now works as a caretaker for an older, wealthy gentleman named Leonard, and Adam is out of work. The lack of income becomes a point of tension for Adam and Katie. Leonard offers to employ Adam as a gardener. Despite going behind the back of the care agency that employs Katie, the married couple is desperate to stay afloat and accept Leonard’s generosity. Things are now looking up for Katie and Adam, and Leonard even gives Katie a raise. Although Katie is apprehensive about taking the money, Adam convinces her to cash the check to be able to pay for their rent and recommends she talk it over with Leonard the next day.

Upon arriving at work, Katie finds Leonard in the attic, dead, and a key on the floor. Adam discovers Leonard has a hidden chest full of money and decides to use it despite Katie advising him otherwise.

Leonard’s death piques the authorities’ attention, and Police Detective Chesler gets deeply involved in the investigation. Katie and Adam’s testimonies are convincing at first. However, circumstances surrounding Leonard’s death become more incriminating for the married couple when a lawyer shows up and tells Katie that Leonard had written a last-minute will leaving his entire property to Katie, who he only knew for four months. With Katie now entangled in a web of lies, she must decide who she can trust.

DANGEROUS LIES opens with compelling the cinematography that continues throughout the duration of the movie and looks professional and creative. The Director of Photography, Ronald Richard, accomplishes a level of polish and striking visuals that are, without a doubt, the standout part of the movie. The acting duo of Camila Mendes (Katie) and Jessie T. Usher (Adam) is believable. Unhappily, the slow story and poorly executed script create a jumbled narrative that makes the final twists feel unbelievable and borderline silly.

DANGEROUS LIES has a strong moral worldview and shows the consequences of dishonesty and violence while also stressing the importance of trusting the people you love and communicating the truth. The movie has some strong violence and brief foul language. One scene implies that Katie and Adam fool around in an intimate way. There’s also some mild humanism where the central characters often look to themselves to solve their problems. So, MOVIEGUIDE® advises caution for older children.