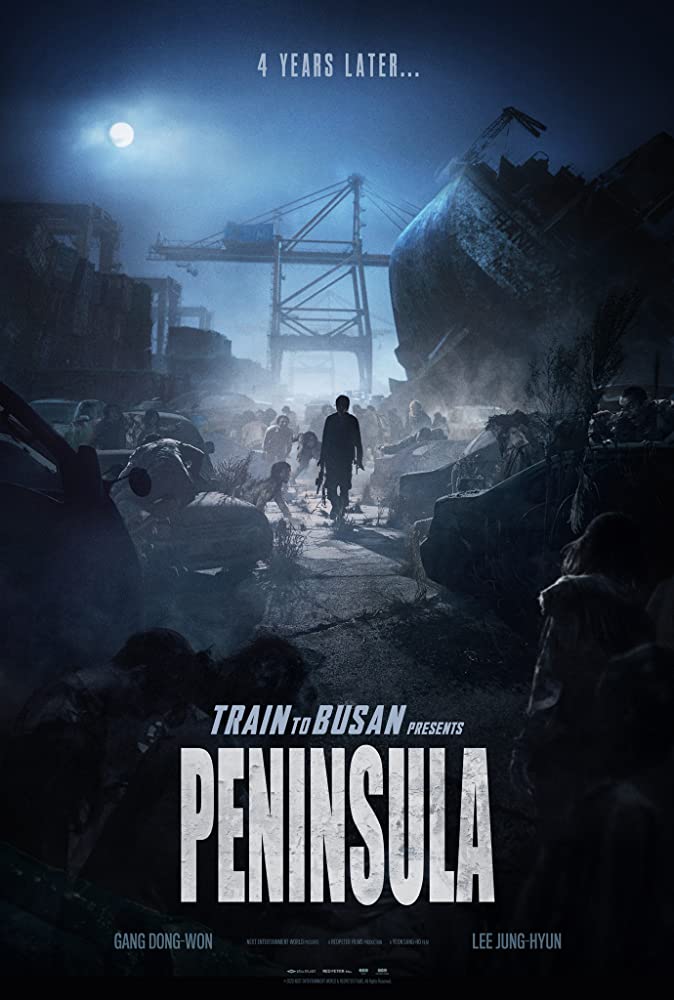 TRAIN TO BUSAN PRESENTS: PENINSULA is a science fiction horror movie about a former South Korean soldier stranded in Hong Kong with his brother-in-law after Korea’s infected with zombies. A local gang recruits them and some other people to return to South Korea to retrieve 20 million U.S. dollars stranded in a truck in a port city. The gang’s ship will pick them up if they can get the truck to the seaport. The mission doesn’t go as planned, however, and the ex-soldier must rely on a mother and her two daughters to retrieve the truck and meet the ship.

TRAIN TO BUSAN PRESENTS: PENINSULA has non-stop action, but the cinematography is often dark so some of the action gets lost. Also, the characters are dull, except for the mother’s two daughters. One can drive like a maniac. Her little sister has a cadre of little robot race cars with flashing lights to distract the zombies. Eventually, the hero decides to do his utmost to save them and their mother. However, PENINSULA has lots of extreme violence and some foul language. So, MOVIEGUIDE® advises extreme caution.

(B, C, PaPa, Ho, LL, VVV, S, N, A, M):
Dominant Worldview and Other Worldview Content/Elements:
Light moral, redemptive worldview set in a dark world where life is cheap, and most people are ruled by greedy, selfish desires, plus one evil and cruel man thinks two other evil men are having an affair but they’re just plotting against him
Foul Language:
24 obscenities (mostly “h,” “s” and bast***) and one GD profanity
Violence:
Lots of strong and very strong violence with blood includes a room full of people is infected by one zombie and attack one another, zombies attack people in streets at night and in an enclosed arena where a group of zombies is allowed to chase a bunch of unarmed men (other men bet on who will survive), vehicles run over zombies, zombies are punched and beaten off and shot, an evil gang of men chases two men, a mother and the mother’s two daughters driving two vehicles, the gang attacks a man and his brother-in-law trying to escape a compound, gunfights, etc.
Sex:
No sex depicted but a man thinks two other men are having an affair, but they’re just plotting against him
Nudity:
Upper male nudity
Alcohol Use:
Brief alcohol use
Smoking and/or Drug Use and Abuse:
No smoking or drugs; and,
Miscellaneous Immorality:
Brutality and a graffiti in a city overrun by zombies says, “God has abandoned us.”

TRAIN TO BUSAN PRESENTS: PENINSULA is a science fiction horror movie about a former Korean soldier stranded in Hong Kong with his brother-in-law who return to zombie-infested South Korea to retrieve some money hidden in a truck. PENINSULA has non-stop action, with lots of jeopardy, where the former soldier has to rescue a family from the zombies, but the cinematography is often dark and murky, and there’s lots of violence and many obscenities.

The movie opens with a Korean soldier named Jung-seok helping his sister’s family finding safety on an international ship leaving South Korea, which has been infected by a disease turning people into zombies. On the way to the ship, Jung-seok refuses to take along a mother’s two children. Once on the ship, however, one of the passengers is infected and his sister’s family doesn’t make it, but his brother-in-law survives.

Four years later, Jung-seok and his brother-in-law are treated like second-class citizens in Hong Kong. A local gang leader recruits them and some other people to go on a suicide mission back to South Korea. The gang is after 20 million U.S. dollars stranded in a truck in the port city of Incheon. The gang leader explains that the city if full of cash that no one is using, and the last team he sent there to retrieve some of the cash didn’t make it. He promises them half the loot if they can get the truck with the cash to the port so his ship can pick them up.

The team is ready for the zombies when they locate the truck. However, they don’t count on a gang of humans trying to take the truck from them. The humans are part of a group of military men left behind who now scrounge the city for food and round up stragglers, whom they use to compete in cruel arena games involving zombies.

With the rest of their team dead, Jung-seok gets rescued by a teenage girl driving a souped-up car with her little sister in the passenger seat. His brother-in-law locks himself in the truck cabin with the money. The gang thinks the truck is filled with food, and they take the truck back to their compound.

The girls take Jung-seok back to their hideout with their mother and elderly grandfather, who also happens to be ex-military. He discovers that the mother is the same woman he refused to help four years earlier.

Jung-seok tells the woman they can get off the island if they can get the truck back and meet the ship at the port. She agrees to help him because she knows a way to sneak into the compound.

TRAIN TO BUSAN PRESENTS: PENINSULA has non-stop action, but the cinematography is often dark and murky, so some of the action gets lost. Also, the characters are rather uninteresting, except for the teenage girl, who can drive like a maniac, and her little sister, who has a cadre of little robot race cars with flashing lights that she uses to distract the zombies. Eventually, the hero decides to do his utmost to rescue the girls and their mother. However, PENINSULA has lots of extreme violence and some foul language. So, MOVIEGUIDE® advises extreme caution.