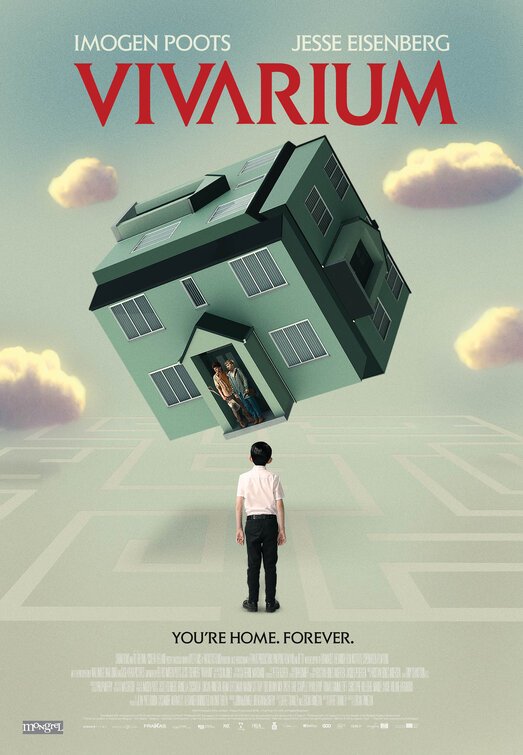 VIVARIUM is an unsatisfying horror movie about a couple lured to a nightmarish suburban neighborhood called “Yonder.” All the houses are identical, and the yards are ideally kept, but the sky looks more like a painting than an actual sky. The couple, Tom and Gemma, decide they don’t want to live there, but when they turn to leave, the real estate agent has disappeared. Then, when they try to leave the labyrinth of homes, each road takes them back to where they started. The nightmare for Gemma and Tom becomes more disturbing.

VIVARIUM has a strong humanist worldview and explores the existentialist, politically correct horrors like marriage being a prison, parenting a scam, homeownership a trap, and the high probability of everyone dying alone. Although there are some biblical morals of motherhood shown by Gemma to the child and preserving love between the couple, the bleak atmosphere is never contrasted by authentic relationships. As a result, the movie ultimately falls flat. VIVARIUM also contains lots of foul language, bedroom scenes and brief nudity. VIVARIUM is too bizarre, too depressing and too shallow.

(HHH, PCPC, APAP, Ab, B, LLL, VV, SS, NN, A, D, M):
Dominant Worldview and Other Worldview Content/Elements:
Very strong humanist, politically correct worldview mocks suburban American life where nothing really matters in the end, marriage and parenthood are explored as horrors with little to no redemptive qualities in the exploration, depiction of creating human life that goes against the biblical account, and a strange place is referred to as a Hell, plus some light positive nods to motherhood and preserving love
Foul Language:
25 obscenities (mostly “f” words), three GD profanities, two Jesus profanities, and two characters hold up a middle finger, and one character returns the gesture
Violence:
A cuckoo bird pushes the other chicks out of the nest, stealing the food for itself, the carcasses of two baby chicks are later spotted by a child, a man trips and hits his head on the curb, a man throws a boy to the asphalt, but the boy just smiles, a man locks a boy in a car, planning to starve him to death, but he is freed, several people die and are put in vacuum-sealed body bags and unceremoniously thrown around, one such instance sees a bag folded with the body’s bones heard breaking and stuffed in a filing cabinet, a body lies in a bloody tub of water implying that the person committed suicide, a character suffers a blow to the head with a pickaxe, but hardly any blood is shown, man wants to a kill a strange threatening boy, and a house is set on fire
Sex:
Partially depicted fornication in one scene while a boy watches from a doorway, briefly depicted intercourse in another scene where another boy applauds
Nudity:
Brief upper female nudity, rear nudity and a book has non-explicit nude illustrations of a man, woman and child
Alcohol Use:
Two characters drink champagne briefly, there is a conversation about when a couple met, and they recall how they were both drunk
Smoking and/or Drug Use and Abuse:
One character is shown smoking several times as a coping mechanism for stress, and a reminder of home;
Miscellaneous Immorality:
Dead bodies are treated poorly.

VIVARIUM is a suspenseful horror-drama about a dating couple who are hoping to find the perfect place to live. They are convinced to travel to a suburban neighborhood called “Yonder,” where all the houses are identical, but when they try to leave the labyrinth of suburban homes, each road takes them back to where they started. VIVARIUM has a compelling concept, achieves a grimy, claustrophobic atmosphere, and offers serviceable performances, but is too bizarre and depressing, and fails to capture any meaning aside from several cliched motifs and metaphors for emptiness.

The movie stars Imogen Poots as Gemma and Jesse Eisenberg as Tom, who play a couple. The movie opens with a nature vignette of the life of a cuckoo bird. It begins with the bird pushing the other chicks from a nest and being fed by the unfortunate mother bird until the imposter is fully grown and ready to leave the nest.

The movie cuts to Gemma as she teaches an elementary school class about nature and having the students pretend to be trees. Gemma cares about her students, and after class is dismissed, she comforts one of them who stumbles across two featherless chicks who have appeared to have fallen out of the tree. Gemma explains to the young girl that although the cuckoo bird may seem “terrible,” it is all a part of life.

Tom, who is a groundskeeper, jumps out of the tree and suggests burying the dead birds. He sings an unintelligible religious chant as a joke. He tells Gemma, his girlfriend, that he eventually wants to buy a gardening truck that he can get dirty so that he doesn’t have to use her car.

The couple, looking for a house to begin their life, stroll into Prospect Properties, where they are met by an odd realtor named Martin. Martin convinces the couple to follow him to a new suburbia he calls “Yonder.” He claims it’s the perfect place to raise a family. Upon entering a gated community, Tom and Gemma notice that all the houses are identical, the yards are ideally kept, and the sky looks more like a painting than an actual sky. Martin leads them to house #9 and gives them an uncomfortable tour until they finally reach the backyard. Convinced they don’t want to live here, they turn to find Martin has disappeared, along with the car they followed into “Yonder.”

What was a nonchalant visit to a possible new home turns stressful as Gemma and Tom try to find their way out on their own. Turn after turn, they always end up arriving in front of house #9. Tensions rise between the couple as they become more confused by the labyrinth of mint-green houses. To their dismay, their car runs out of gas by nightfall, and they spend the night at house #9. They find champagne and strawberries in the fridge, but the food has no taste.

After more failed attempts of finding their way out the next day, they begin to receive care packages in the form of cardboard boxes that have tasteless but vacuum-sealed food and essentials. One day, the cardboard box contains a child that the couple must raise to gain their freedom. However, time passes differently in “Yonder,” and the couple grows fearful of the child who always seems to study them in an inhuman fashion and grows at an alarming rate. Tom thinks they should kill the child, but Gemma, despite telling him she’s not his mother, wants to care for him. The nightmare for Gemma and Tom becomes more and more disturbing.

VIVARIUM has a compelling Twilight Zone concept, achieves a grimy, claustrophobic atmosphere, and offers serviceable performances. However, the movie does little to explore anything below the surface of the characters and doesn’t answer many simple conceptual questions about the world. The heavy expositional dialogue and odd pacing make both the characters and any attempt at a “moral of the story” feel disjointed and shallow. The director creates a foreboding, stale atmosphere, but without any moral or emotional substance, he leaves viewers wondering, “Why should I care?”

VIVARIUM has a strong humanist worldview and explores the existentialist, politically correct horrors like marriage being a prison, parenting a scam, homeownership a trap, and the high probability of everyone dying alone. Although there are some biblical morals of motherhood shown by Gemma to the child and preserving love between the couple, the bleak atmosphere is never contrasted by authentic relationships. As a result, the movie ultimately falls flat. VIVARIUM also contains lots of foul language, bedroom scenes and brief nudity. VIVARIUM is too bizarre, too depressing and too shallow.