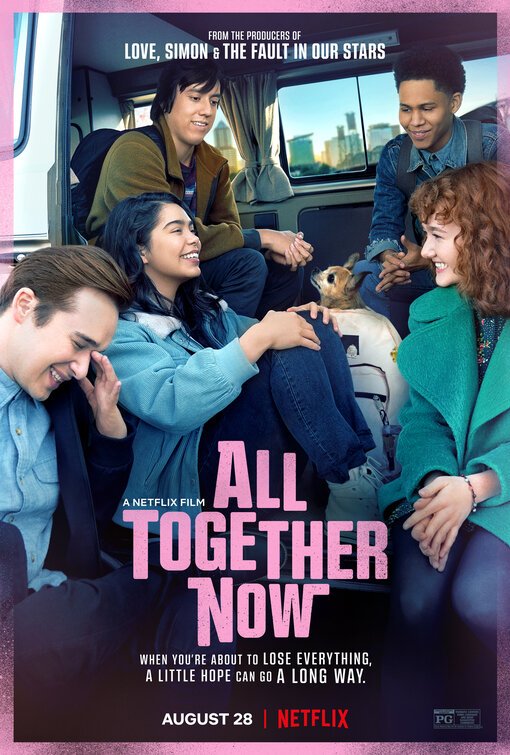 A Netflix original movie, ALL TOGETHER NOW follows a hard-working teenage girl named Amber who continues to be dealt life’s hardest hands. Amber and her mother Becky are homeless, and while Amber does all she can to try and make ends meet, her mother is more worried about other things. Amber then has to lean on her community of friends but refuses to accept the help she knows she needs.

Heartfelt and sometimes funny, ALL TOGETHER NOW contains some moral elements of putting other people above yourself and helping your community in any way possible. The movie also shows a loving mother who wants to do all she can for her daughter, but ultimately falls short to her worldly desires. However, the main character reflects a humanist attitude. She believes only she can provide for herself and doesn’t want to accept help from others. Her future is in her own hands, but she doesn’t realize that life doesn’t need to be as hard as she’s making it. Ultimately, ALL TOGETHER NOW warrants caution for brief foul language and conversations about mature topics.

(BB, H, C, L, V, S, AA, M):
Dominant Worldview and Other Worldview Content/Elements:
Strong moral worldview overall extols worldview that contains moral elements of helping other people and putting them before yourself, marred by some humanist elements of only believing you can help yourself and refusing to let anyone else come in the picture to try and take your life away from you, plus a minor character is a priest
Foul Language:
Three obscenities and three light profanities
Violence:
Mother loves a guy who hit her and encourages her to drink, which leads to the two of them getting into a car accident and dying, but the accident is only talked about not seen, plus there are conversations about a dog being sick and potentially dying
Sex:
Older woman asks if young girl hooked up with a boy and encourages her to do so, one kiss between a young girl and boy, the same girl and boy holds hands
Nudity:
No nudity, but a girl is seen in towel after taking a shower
Alcohol Use:
A mother is a recovering alcoholic and is relapsing, but her drunkenness is never seen on screen, only mentioned, but not promoted
Smoking and/or Drug Use and Abuse:
No smoking or drugs; and,
Miscellaneous Immorality:
A mother is a bad role model but ultimately loves her daughter and will do whatever it takes to provide for her, plus a backpack is stolen by a random person.

ALL TOGETHER NOW follows a hard-working teenage girl, Amber. The movie opens with Amber working and picking up paychecks from her many jobs before heading to a school bus, the one her mother, Becky, drives, to sleep for the night. Amber and Becky have their differences. Becky is a struggling alcoholic who does everything she can to provide for her daughter, but ultimately can’t give Amber the care she needs, because they’re homeless.

The next morning, Amber and Becky awake early. Amber heads off to do some of her early morning work at a retirement home. Amber and Joan, an older woman who lives at the home, are close acquaintances and spend time together. After Amber checks in on Joan, she heads to her best friend, Ricky’s, house. Amber makes breakfast for her and Ricky as she waits for Donna, Ricky’s mother, to get home from work.

Ricky and Amber are picked up for school by their friends, Ty, Jordan and Chad. Amber and Ty seem to be a bit more than friends, but don’t cross that line. At school, the group of friends like to host events to help raise money for different causes, as well as being part of the drama club. While hanging out in the drama room, Amber uses the computer to check her email and finds out she received an audition at Carnegie Melon drama school.

Amber’s not sure how she’s going to get all the way to Philadelphia to audition because she doesn’t have any extra money. However, she’s encouraged by her teacher and friends and knows she will find a way to make it work.

Later that evening, Becky doesn’t come home to the bus and Amber is worried. When Amber wakes up the next morning, Becky is waiting for her in a truck. When Amber finds out her mother’s been hanging out with an abusive boyfriend, Oliver, she’s furious. However, when Amber tells her mom about her audition, her mom encourages Amber to use the saved money to buy a plane ticket and go.

That evening when Amber returns to the bus, she finds a note from her mom that says it’s not safe and to meet at their spot. When Amber arrives at the diner, she finds out her mom lost her bus driving job. Amber confronts her mother, asking if she’s drunk. This meeting starts a rift between the two, and Amber leaves her mom.

Amber ends up coming clean about her situation to Ty, Ricky and Donna. However, Amber standing up for herself and not wanting to live in an abusive home environment with her mom and Oliver, and instead live with Ricky and Donna could change her life forever.

ALL TOGETHER NOW has its heartfelt, funny moments. However, Amber is very melodramatic and self-sabotaging, which gets to be incredibly annoying since everyone around her wants to help her. However, she doesn’t know how to accept help, she only knows how to give it. Despite that, the quality of ALL TOGETHER NOW is good, especially for an original Netflix movie, though not extraordinary. Seasoned comic actress Carol Burnett helps add to the movie’s appeal, however.

ALL TOGETHER NOW has a moral worldview overall about putting other people above yourself and helping your community in any way possible. The movie also shows a loving mother who wants to do all she can for her daughter, but ultimately falls short to her worldly desires. However, the main character reflects a humanist attitude. She believes only she can provide for herself and doesn’t want to accept help from others. Her future is in her own hands, but she doesn’t realize that life doesn’t need to be as hard as she’s making it. Ultimately, ALL TOGETHER NOW warrants caution for older children because of this issue, brief foul language and conversations about mature topics, such as recovering from alcoholism.

Watch ALL TOGETHER NOW: