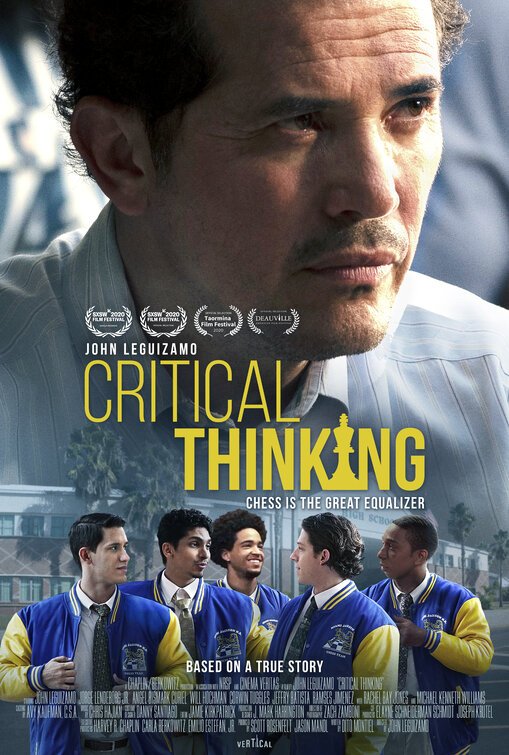 CRITICAL THINKING is a unique sports drama. It chronicles the true story of an underfunded high school chess team’s improbable rise to success and their triumph over cultural, political issues in Miami, Florida’s inner city. Mario Martinez, the chess team’s teacher and mentor, is overworked. Despite this problem, his dedication to his students and tough love motivates them to triumph over their unfavorable life circumstances while playing competitive chess. Some students are still overwhelmed, however. The odds seem stacked against the chess team’s success.

CRITICAL THINKING contains some heartfelt moments and an inspiring message about the importance of education in overcoming poverty. Director John Leguizamo generates some fun, energetic chaos in the teacher’s classrooms, carried along by his performance as the teacher. That said, CRITICAL THINKING has a strong humanist worldview. Characters are encouraged to fight for themselves. Also, the movie contends that life and American society are totally against the poor. These elements are mitigated by some moral, redemptive points and a reference to a “higher power.” CRITICAL THINKING is marred, however, by excessive foul language, marijuana references and brief comical nudity.

(HH, PC, AP, B, C, LLL, VV, S, NN, AA, DD, M):
Dominant Worldview and Other Worldview Content/Elements:
Strong humanist worldview with some politically correct Anti-American elements where characters are encouraged to fight for themselves and movie contends that American society is against the poor, with some moral, redemptive elements such as hard work is encouraged, teacher makes a lot of sacrifices for his students, teachers sympathizes with his students, conversation about not being the one in control of your life, the movie also emphasizes integrity and the importance, albeit sometimes flawed, of education, and a prayer to a “higher power”
Foul Language:
At least 121 obscenities (including about 55 “f” words and at least 40 “s” words), two GDs, one JC, and an OMG
Violence:
Strong violence includes a boy runs into a woman by accident, and a man drives up and shoots him in the head (no blood is shown but the scene is very shocking), a teenager knocks out a man who’s choking him by slamming his head into a glass cooler several times (no blood is shown), several instances of adults aggressively shoving teenagers, father shoves son, detective shoves teenager
Sex:
Two brief scenes of an unmarried couple kissing, but it’s implied they sleep together too
Nudity:
One student comes out of the pool naked, but a towel is quickly wrapped around him, and nothing is seen, later the same boy drops the towel and chases his friends around the pool and his bare behind is scene, some friends draw male genitals on their friend’s face as an awful joke, similar illustrations are briefly shown as graffiti Alcohol Use/Abuse: Teenage boy’s father appears to be an alcoholic
Smoking and/or Drug Use and Abuse:
Students try to sell marijuana cookies to raise money to go to a chess tournament, several of those students are shown getting high before selling them, and one student gets involved with selling drugs, and the same character is seen smoking several times; and,
Miscellaneous Immorality:
Brief gambling over chess games.

CRITICAL THINKING, actor John Leguizamo’s directorial debut, is a sports drama that chronicles the true story of an underfunded inner city high school chess team’s improbable success in chess in 1998. CRITICAL THINKING has some inspiring messages, but it’s marred by excessive foul language, more than 125 obscenities and profanities, plus some references to marijuana use and brief comical nudity.

The movie opens with Sedrick Roundtree, a student at Miami Jackson, lying on his bed, reciting chess moves repeatedly in his head. Before heading off to school, Sedrick is challenged by his father in a game of chess. Sedrick’s father says he’ll give his son an allowance if Sedrick wins a chess game, but Sedrick loses.

The movie cuts to an auto repair shop. Ito Paniagua, also a student at Miami Jackson, leaves work after an early morning shift. Ito meets Sedrick on the bus. They arrive at Miami Jackson and join their classmates in the elective classroom, “Critical Thinking.”

The audience is introduced to the dedicated teacher, Mario Martinez, and a small class of students. While Martinez is working to balance his lecture and his classroom’s chaos, an immigrant student is brought into class by the principal. However, in the next scene, the immigrant student gets murdered on his way home from school. Martinez now has more reason not to give up on his students. Despite the school refusing to fund the chess team, Martinez and four of his best players are determined to go to the chess tournament, and they end up winning.

Martinez and his students face the inner-city culture of violence and poverty, broken households, and an underfunded school. Martinez encourages his students to pursue chess to escape their harsh lives without making bad decisions. However, some students are overwhelmed by their circumstances. Although the odds seem stacked against Martinez and his students, they must make their own decision to fight for their chance at success.

CRITICAL THINKING, John Leguizamo’s directorial debut, is a sports drama that chronicles the true story of the underfunded Miami Jackson High School chess team’s improbable rise to success in chess, and their triumph over the cultural and political issues of the inner city in Miami, Florida. Mario Martinez, the chess team’s teacher and mentor, is overworked. Still, his dedication to his students and tough love motivates them to triumph over their unfavorable life circumstances by playing the game of chess. However, Leguizamo’s realistic approach to dramatizing the true story falls into the tired tropes of sports dramas and, in the end, sacrifices nuanced characters for simple narrative payoffs.

CRITICAL THINKING contains some heartfelt moments and an inspiring message about the importance of education in overcoming poverty, but misses the true key to overcoming poverty – faith in Jesus Christ. Director Leguizamo generates some fun and energetic chaos in his classrooms, carried along by his performance as Martinez. That said, CRITICAL THINKING has a strong humanist worldview, with some politically correct Anti-American content. Characters are encouraged to fight for themselves. Also, the movie contends that American society is totally against the poor. These elements are mitigated by some moral, redemptive content. For example, hard work is encouraged, the teacher makes sacrifices for his students, and there’s a prayer to a “higher power. However, CRITICAL THINKING is marred by excessive foul language, some marijuana references and brief comical nudity.