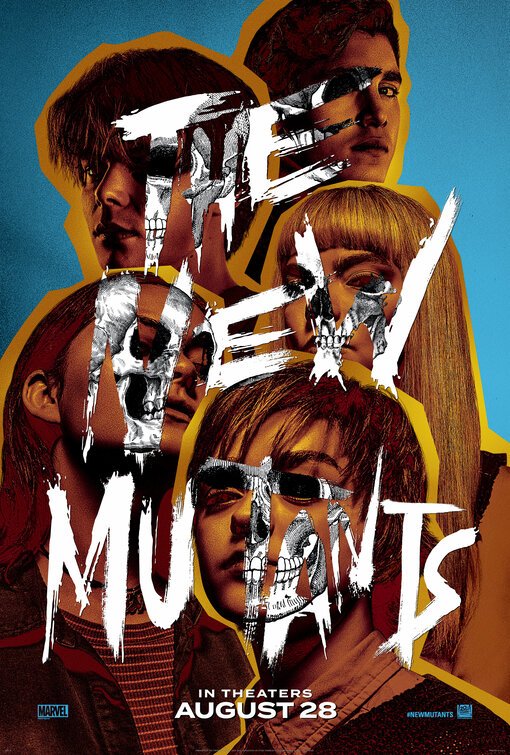 THE NEW MUTANTS features demon possessed teenagers with super powers seeking to escape a training center for mass murderers posing as a hospital. A Native American girl named Dannielle Moonstar awakens handcuffed to a bed in the hospital. A doctor informs her she’s in a special program for teenagers with mutant powers to help the mutants learn how to control their powers for good. She meets four other mutants in the program who have each had some demonic experience in the outside world that resulted in some deaths.

Unlike most superhero movies, THE NEW MUTANTS was made to fit a horror genre. It’s filled with demonic imagery, including a demonic attack of a little girl in her bed, a bloodthirsty priest, mask wearing villains with long pointy fingers, and a massive demonic bear. The movie is further marred by the two most likable characters in the movie sharing a lesbian kiss in two separate scenes. The lesbian scenes wind up being the sweetest most tender moments in the movie. THE NEW MUTANTS includes some extreme violence and brief foul language.

(OOO, FRFR, AbAb, HoHo, B, Acap, L, VVV, S, N, DD, MM):
Dominant Worldview and Other Worldview Content/Elements:
Very strong occult worldview where children are oppressed by violent demons to be controlled by simply telling the naughty demon to “stop that,” there’s some false religious instruction about a good bear and a bad bear being in your spirit, and you have to feed the good bear but have no need for God, and a priest is bloodthirsty, with some overt lesbian references, some moral elements, and some anti-capitalist content
Foul Language:
At least seven obscenities, mostly “s” words and profane reference to Jesus
Violence:
Very strong and strong violence with some blood includes stories of children killing people (some are remorseful, some are not), giant creatures and monsters, and a priest attacks people, one character hits himself several times, scary image of a skeleton on fire, a suicide attempt is thwarted
Sex:
Two scenes with girls kissing, and two scenes of a little girl being attacked in her bed (not followed through but just enough to see she was about to be attacked)
Nudity:
Upper male nudity
Alcohol Use:
No alcohol use
Smoking and/or Drug Use and Abuse:
No smoking but medicinal drugs used on teenagers to control them, drugs used to cause the doctor to sleep, and drugs used to try to kill someone,
Miscellaneous Immorality:
Strong terror and fear in large quantities, dishonesty, and teenagers are mean to each other.

THE NEW MUTANTS features demon possessed teenagers with super powers seeking to escape a training center for mass murderers posing as a hospital. Aimed at teenagers it’s a bold statement by Marvel, 20th Century Fox and Disney about how low these companies intend to go.

The movie opens with a voice over of a girl named Dannielle Moonstar relating to the audience how she was taught a Native Indian saying that we all have inside a good bear and a bad bear. It turns out she has a very bad bear that upon her becoming a teenager is revealed to be demonic in extremely powerful ways. An event in her community that she believes to have been a tornado leaves her the only living person.

Danielle awakens in a hospital handcuffed to a bed. A Dr. Reyes comes to see her and informs her she’s in a special program for teenagers with mutant powers. She’s told young people first discovering mutant powers can actually be a danger to themselves and others and this program helps them to learn how to control their powers so they can be used for good. She meets four other mutants in the program who have each had some demonic experience in the outside world that resulted in some deaths. Danielle is unaware of what her mutant power might be.

The teenage mutants are not a friendly bunch. As with most super hero movies, viewers get to spend some time seeing how much they dislike each other before they can join forces. Gradually, they learn they aren’t being trained to benefit society but to be controlled for evil purposes. They must unite to even escape.

Unlike most super hero movies, this one was made to fit a horror genre. It’s filled with very demonic imagery, including a demonic attack of a little girl in her bed, a bloodthirsty priest, mask wearing villains with long pointed fingers, and a massive demonic bear. In one scene, a girl runs into a church shouting “demons can’t come in churches,” but it does anyway. The church is destroyed in the mayhem.

Sadly, Hollywood delights in conveying demons and their great powers, but too often avoids displaying to power of God and angels to battle demons. With tremendous horror raging, there is no cry out to God for help.

The movie is further marred by the two most likable characters sharing a lesbian kiss in two separate scenes. The lesbian scenes wind up being the sweetest most tender moments in the movie. Aimed at teenagers, this is pure LGBT propaganda.

The movie contains some vulgarity, but PG-13 in nature. The violence is intense. There are the lesbian kisses and a scene that looks like the beginning of a child in bed rape scene. The worldview is occult, with some false religion. In reality, people don’t have a good bear and a bad bear inside them. We are all born into a sinful world and need a savior, Jesus Christ. People also don’t need a good bear. The good that we really need we receive when we give our life to Jesus, who gives the fruit of His Holy Spirit: love, joy, peace, patience, kindness, goodness, faith, gentleness, and self-control.