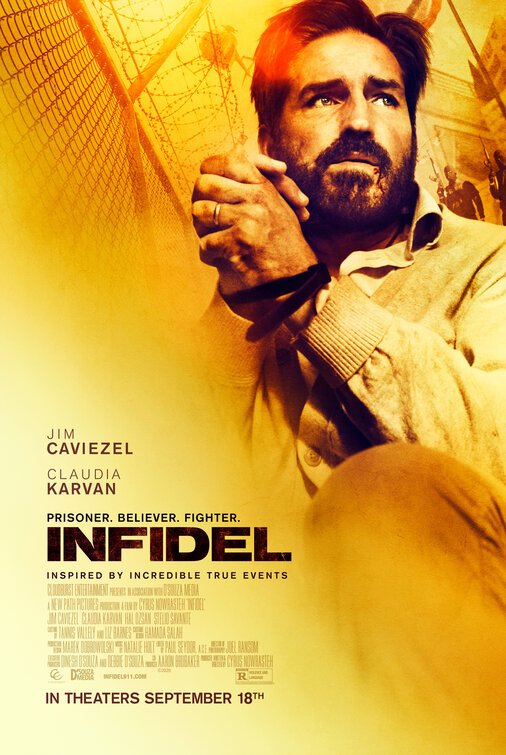 INFIDEL follows an imprisoned evangelist in the Middle East and his sturggle for survival.

Posted by Movieguide on Friday, September 11, 2020

(CCC, BB, H, Fr, LLL, VVV, S, N, A, DD, MM):
Dominant Worldview and Other Worldview Content/Elements:
Very strong Christian worldview as the main character is willing to die before denouncing his faith that Jesus is God, the Gospel of Jesus Christ is presented clearly, Scripture is also referenced, and main character is seen talking to God, a loving marriage is portrayed as well as other people that don’t know the main characters are willing to risk their lives to help save them from the terrorists. Light humanist elements as one character believes she has to save her husband herself. Some false religion elements as Muslim faith and Allah are talked about
Foul Language:
41 obscenities (mostly F-bombs), 5 profanities (mostly OMGs), strong name calling
Violence:
Guns and knives seen and used, many people are shot and killed, bombs, many fist fights where man is beaten, tortured and whipped, car accident, father kills his daughter, but it’s not seen
Sex:
Some kissing between married couple
Nudity:
Woman seen in shower from the head up, woman seen again in a towel
Alcohol Use:
Alcohol drank by some at a party and by a woman at home but no drunkenness
Smoking and/or Drug Use and Abuse:
Cigarette smoking at least 7 times and a hookah bar is shown where people are smoking; and,
Miscellaneous Immorality:
Kidnapping, holding man hostage, dysfunctional family portrayal in family friends, lying.

Inspired by a true story, INFIDEL opens in Iran, with a man on the brink of being executed. When the trigger is pulled, the movie cuts to 6 months earlier in Washington D.C.. Doug, who’s an influential Christian blogger is picking up his wife Liz, from work at the state department. Doug and Liz head to a graduation party for their close friends, Javid and Soheila, daughter, Meena. Javid and Soheila are from the Middle East and are of Muslim faith.

Later that evening, Liz receives a call from Soheila saying that Meena is missing, and that she left her party with her American boyfriend. Soheila is very worried, but Liz encourages her that Meena will come home. Soon after, the audience learns that Javid’s taken his own daughter hostage in their home in preparation of an honor killing.

Hours later, Liz gets another call. This time her and Doug head over to Javid and Soheila’s home as Meena still hasn’t come home. Before they leave, Liz calls the police, though. When the police arrive, they find a terrorist-like recruitment center in the basement of Javid’s home. Doug is shocked and realizes he doesn’t know his friend as well as he thought. As Doug leaves, he and Javid have a stare down moment that feels like this isn’t the last time they will see one another.

A week later, Doug and Liz are preparing for Doug to head to Cairo, Egypt. He’s been invited to talk about recent uprisings there, and obviously, his faith. Liz pleads with him not to preach his faith while there, as she wants him to be safe. Liz pleading with Doug to not share his faith is also tied to an accident they experienced where Liz lost her unborn baby and her ability to have a child and so gave up on God . Cut to Cairo, Doug is on the stage answering the interviewer’s questions and is in conversation with him about faith. When they get on the subject of Jesus, though, Doug tells them that Jesus is God, which causes chaos.

Doug is escorted back to his room amid being flooded by press. In the elevator, Doug meets a man that is visibly upset at Doug for coming to his country and trying to convert people to Christianity. As Doug and the strange man leave the elevator, the two go their separate ways. After Doug enters his room, he sees the strange man and his friends linger outside his door.

Later that night while talking to Liz on the phone, the group of men, led by the man in the elevator, break into Doug’s room and kidnap him. Liz hears the whole altercation happen over the phone and immediately tries to get the U.S. government to get involved in rescuing her husband. After a few days pass, Liz learns that Doug is being held in Lebanon and falsely accused of being a spy.

When Liz realizes the U.S. has no intention of helping her get Doug back home safely, she boards a flight and heads to the Middle East to try and save Doug’s life.

INFIDEL is a thrilling action-packed movie. The acting in INFIDEL is top notch. Hal Ozsan brings a captivating performance as the charismatic villain while Jim Caviezel of THE PASSION OF THE CHRIST becomes his character. The movie has constant jeopardy which leaves the audience wondering who will live and who will die all the way until the very end.