RED SHOES AND THE SEVEN DWARFS

"Parody of a Classic Tale, with a Twist" 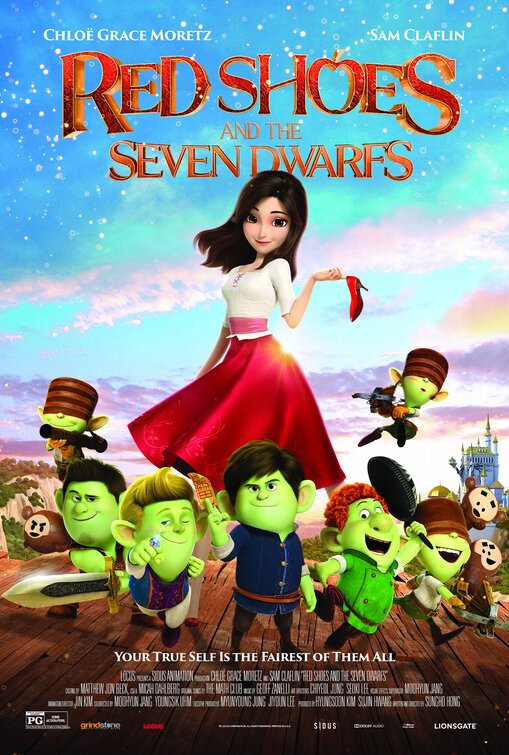 A spoof on a classic tale like you and your family have never seen before!

Posted by Movieguide on Friday, September 18, 2020

RED SHOES AND THE SEVEN DWARFS is a delightful animated fairytale. Seven human princes have been cursed and changed into little green dwarfs. They must find a princess to kiss and break the curse. Meanwhile, a wicked witch has taken over the kingdom and is desperate to be the land’s prettiest woman. She creates shoes that will create eternal beauty, but Snow White, plump and self-conscious, steals the red shoes. While fleeing from the witch, she runs into the seven dwarfs. Hiding her true identity, she tells the dwarfs her name is Red Shoes. They see their opportunity to get back their old appearances by earning the affection of Red Shoes.

RED SHOES AND THE SEVEN DWARFS is a funny, endearing adventure that parodies the classic tale of Snow White with its own unique twist. The movie has a strong moral worldview where love conquers evil and character is valued above appearance. The voice acting and well-told story about honesty makes for an entertaining, family-friendly movie. However, RED SHOES has some cartoonish violence, flirting and magic. So, MOVIEGUIDE® advises caution for younger children.

(BBB, CC, H, O, V, M):
Dominant Worldview and Other Worldview Content/Elements:
Very strong moral worldview where love conquers evil, with Christian themes of sacrifice and love conquering death, plus other moral elements like loyalty, honesty, faking appearances ultimately has negative consequences, movie revolves around the idea of appearance and says it doesn’t matter what you look like but how you act, mild humanist elements where characters rely on their own strength to save themselves, some occult elements as there are witches and wizards, curses, sorcery, and magic
Foul Language:
No foul language
Violence:
Action and danger dotted throughout, characters are chased, a near-drowning, several cartoon fighting sequences, characters hit with metal hammers and chased with swords, no graphic or serious injury, canons are fired at people, Merlin uses magic which takes the form of lightning, several characters are electrocuted, the wicked queen is cartoonishly ghoulish, she uses sorcery several times, and a character appears to have sacrificed themselves and is seen dying in another’s arms, but they survive
Alcohol Use:
No alcohol
Nudity:
No nudity
Sex:
No sexual immorality, but breaking a curse involves receiving a kiss from a princess, some flirting and attempts at kissing, a couple depictions of kissing between unmarried characters, several references to characters being physically attractive in the context of sexual appeal, but these are presented with cartoonish innocence and without inappropriate language or indecent behavior
Smoking and/or Drug Use and Abuse:
No smoking or drugs; and,
Miscellaneous Immorality:
Love based solely on physical attraction; however, this is seen as harmful and character’s minds are changed.

RED SHOES AND THE SEVEN DWARFS is a fun, endearing animated adventure that parodies the classic tale of Snow White with its own unique twist on the fable.

The movie opens with seven powerful princes saving a kingdom from the attacks of a dragon. However, in their eagerness, they mistake a fairy for a witch, who curses them by turning them into tiny, green dwarfs. The only way to reverse the curse is to receive a kiss from a real princess.

Cut to a montage. Viewers meet Snow White. However, after Snow White’s mother dies, the King marries Regina. Regrettably, Regina is secretly a witch. She ends up taking control of the throne and cursing the King.

Snow White isn’t the stereotypical princess. She’s heavyset and round. She sneaks into the castle, where the witch is guarding a pair of red shoes to make her beautiful forever. Snow White doesn’t know what the shoes do, but she wears them and is chased from the witch’s castle, straight into the lives of the seven dwarfs.

Snow White realizes her whole appearance has changed now while wearing the shoes. She wants to keep her true identity a secret. She tells the dwarfs her name is Red Shoes, and immediately they begin to scheme about how they can get Red Shoes to lift their curse. They agree to help her find her father in the hope their true identities will be restored.

The wicked witch recruits the help of a young, egotistical prince named Prince Average. He forces Red Shoes to attend his birthday party. Merlin and the six other dwarfs heroically defend Red Shoes against the Prince, and Merlin and the princess begin to grow closer. He continues to help her find her father, saving her many times along the way until, finally, there seems to be an opportunity to receive a kiss from Red Shoes.

However, will the kiss restore Merlin’s true identity and attract Red Shoes to him more, or will both their secret identities and motives ruin their relationship and doom the Kingdom?

RED SHOES AND THE SEVEN DWARFS is a funny, endearing animated adventure. Positively, this animated movie is one that both parents and their children can enjoy because the twists keep viewers on their toes from the classic story that people know and love.

RED SHOES AND THE SEVEN DWARFS has a strong moral worldview where love conquers evil and the importance of character over appearance. The voice acting and well-told story of honesty about one’s true identity makes this an entertaining, family-friendly movie. However, due to some cartoonish violence, flirting and use of magic, MOVIEGUIDE® advises caution for younger children for RED SHOES AND THE SEVEN DWARFS.