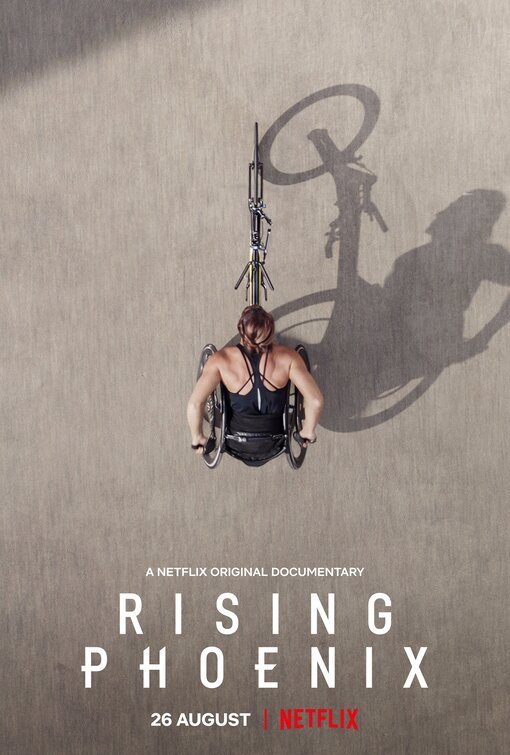 An original Netflix documentary, RISING PHOENIX highlights the stories of Paralympic athletes from around the world. The documentary focuses on the 2012 London games and the 2016 Rio games, and talks about previous games. The athletes are able to tell their own personal stories. Along with their inspiring stories, the backstory of how the Paralympic games began is told. The documentary shows how the athletes beat the odds when others said they weren’t good enough, and how they deserve the same treatment as the athletes in the Olympic games.

RISING PHOENIX is emotionally powerful and inspiring. It has a light humanist worldview about the Paralympics and the athletes trying to save the world. Other comments about sports saving their life and bringing them back from dark places are heard. The movie has some moral, redemptive elements that extol encouraging other people, hope, adoption, believing in yourself, and prayer. However, there is some foul language, some violence in some of the sports played at the games, and some conversations about past civil wars and the Holocaust. So, MOVIEGUIDE® advises caution for older children.

(H, BB, C, L, V, N):
Dominant Worldview and Other Worldview Content/Elements:
Light humanist worldview as athletes talk about sports saving their lives and bringing them back from dark places, and how they’re trying to save the world, with some strong moral, light redemptive elements promoting adoption, cheering for others, hope, believing in yourself are extolled, plus prayer is also when another athlete prays for someone before a race
Foul Language:
Eight obscenities
Violence:
Some violence while wheelchair rugby is played, discussion about the Burundi Civil War and how an athlete lost his leg while being attacked and then watched his mother get murdered, and some dead bodies shown in relation to Hitler’s National Socialist Germany and the Holocaust
Sex:
No sexual immorality or sex scenes
Nudity:
Upper male nudity while man is running, females in one-piece swimsuits
Alcohol Use:
No alcohol
Smoking and/or Drug Use and Abuse:
No smoking or drugs; and,
Miscellaneous Immorality:
Nothing else objectionable.

An original Netflix documentary, RISING PHOENIX highlights the stories of Paralympic athletes from all over the world, while also providing information on how the Paralympics games began and where they are now. The documentary is emotionally powerful and inspiring, but there’s some foul language and a little violence, so MOVIEGUIDE® advises caution for older children.

Next, the movie jumps to the 2012 Paralympic games in London. Interviews with former and current members of the International Paralympic Committee are shown throughout the move. These men talk about what they do, how they organize the games and their admiration for the athletes who compete.

However, the real emotion and inspiration come from the stories of the Paralympic athletes. The movie introduces audiences to a handful of athletes from around the world. The athletes sit down and are able to tell their stories. These stories range from being born with their disability and learning to adapt, getting sick and having to go through amputations, and one story about an athlete surviving the Burundi Civil War.

Along with the incredible stories about the athletes and how they got to where they are today, viewers also get the backstory on how the Paralympics started. Eva Loeffler, the daughter of Sir Ludwig Guttmann, speaks on behalf of her father, the creator of the Paralympic games. There are also some voiceovers from previous interviews with him.

The movie also talks about other years of the Paralympic games and concludes with the 2016 Rio Olympics, and how the Paralympics almost didn’t happen that year.

RISING PHOENIX has a light humanist worldview as the athletes talk about trying to save the world. Other comments about sports saving their life and bringing them back from dark places are also heard. The movie also has some moral, redemptive elements encouraging cheering for others, being there for others, hope, adoption, believing in yourself, and prayer. However, RISING PHOENIX has some foul language, some violence in some of the sports played at the games, and some conversations about past civil wars and the Holocaust. So, MOVIEGUIDE® advises caution for teenagers.