"Marred by Gratuitous Foul Language and Some PC Baloney" 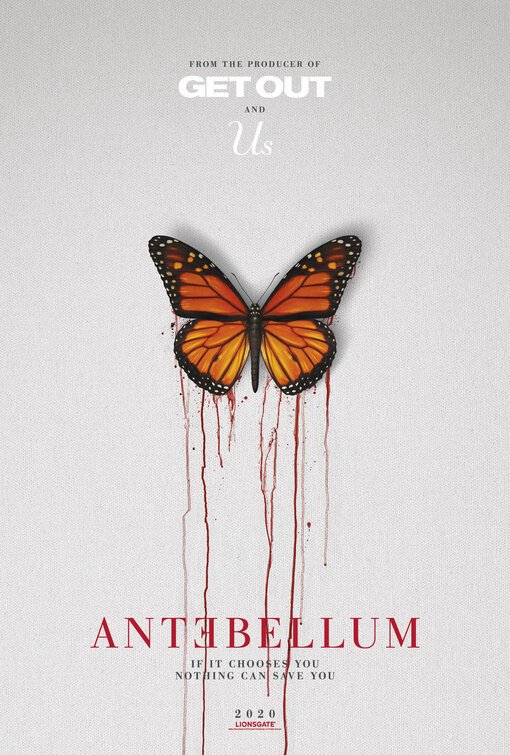 ANTEBELLUM is an interesting, well-made thriller about a black woman trying to escape a slave plantation run by vicious Confederate soldiers. After a stunning but unsettling introduction where a Confederate captain cruelly shoots a black female slave in cold blood, the story focuses on a woman named Veronica, who’s kidnapped and enslaved on a Southern plantation run by soldiers. Her name is changed to Eden, and she’s forced to become the slave mistress of the General in charge. Things on this slave plantation are not what they seem. A flashback shows how Veronica was kidnapped. The exciting ending involves Veronica trying to make a final desperate escape attempt.

ANTEBELLUM is intense, provocative and harrowing. The music is great! ANTEBELLUM has a Christian worldview where a small gold cross becomes an important metaphor. At an important point, the movie also promotes love, compassion, brotherhood of all, and loving one’s enemies. However, ANTEBELLUM’S Christian worldview is marred by lots of strong, unnecessary foul language and some leftist, feminist, politically correct content. MOVEGUIDE® advises extreme caution for this content and for some strong, disturbing violence.

(C, BB, RoRo, PCPC, RHRH, Fe, FR, LLL, VV, S, N, AA, D, M):
Dominant Worldview and Other Worldview Content/Elements:
Light Christian worldview with strong moral, anti-slavery, pro-family elements, marred by some strong Romantic, politically correct, revisionist content about race and history, including feminist comments about “patriarchy” and the low status of black women, and villain tells his cohorts they are “descendants of gods”
Foul Language:
37 obscenities (mostly “f” words), two GDs, one strong Jesus profanity, a few “n” words, and enslaved woman vomits after being released from a wooden cage holding her and other women on a cart
Violence:
Lots of strong, intense and often disturbing violence such as a white Confederate soldier shoots down a black female slave in cold blood after she failed to escape while running away, implied rape, implied branding a black female slave with a hot iron, Confederate soldiers hit black people with butts of their rifles, Confederate soldiers use a small brick smokehouse to burn bodies of dead black slaves, sound of whipping a black female slave, man hit with an ax ad dies, man stabbed with a sword a couple times, young Confederate soldier slaps a black female slave in her cabin for talking without being asked to talk, woman finds the body of another woman who’s hanged herself, woman is kidnapped with a hand over her mouth and deliberately knocked unconscious, woman gets revenge on two murderous villains by locking them inside building where bodies of dead people are burned to hide evidence, two women fight desperately, character lassoes villain’s neck and drags villain behind a horse until villain’s head hits what appears to be a hard wooden plank wall sticking out of the ground, and images of a Civil War battle with explosions
Sex:
Implied fornication and rape when there are sounds of sex in a small slave cabin, and the movie cuts to a white Confederate general sighing and rolling off a black woman’s body, some crude references to sex (for example, woman admits she’s going to frequent some bars in order to find someone with whom to have a one-night stand)
Nudity:
Upper male nudity in one scene
Alcohol Use:
Alcohol use and two Confederate soldiers appear to be drunk during their rounds at a slave plantation one night
Smoking and/or Drug Use and Abuse:
Brief smoking but no drugs; and,
Miscellaneous Immorality:
Kidnapping, people restrained, slavery, brutality, and cruelty but essentially rebuked, and some revenge not rebuked.

ANTEBELLUM is an interesting, intense, provocative thriller about a black woman trying to escape a slave plantation run by vicious Confederate soldiers. ANTEBELLUM is harrowing, has some great twists, and contains a Christian worldview, but the movie’s Christian, moral sentiments are marred by lots of strong, unnecessary foul language and some leftist, feminist, politically correct content. Sadly, the movie’s trailer gives away some of the twists.

The movie opens with a quote from novelist William Faulkner, “The past is never dead. It’s not even past,” The story in ANTEBELLUM then begins with a long tracking shot of a Southern plantation where a little girl with flowers in her hand skips toward the back of a beautiful Southern plantation. A woman dressed in period clothes comes down the stairs on the outside to greet her daughter. The camera pans across the plantation as Confederate soldiers march and black men and women in slave garb work on putting up a large tent and four black women in slave garb work on a clothesline with white sheets. A horse carrying a black women is led by two soldiers to a cabin. One of the soldiers callously pulls the woman off the horse. Then, the camera pans to two soldiers struggling, in slow motion, to put a slave collar on a black man while a black woman wearing a little gold cross cries hysterically.

Suddenly, the black woman takes off running, and the camera pans to a Confederate captain on a horse. The captain pauses to take a drink from a small flask, then rides after the woman. Still in slow motion, the camera then cuts back and forth to the chase between the woman and the captain while the black man, now firmly held down, watches in horror.

All these images are set to riveting music that rises in intensity. The music stops when the captain casts a lasso that grabs the woman by the neck and pulls her down. The captain gets down from his horse and walks slowly toward the woman. “Kill me,” the woman pleads. The captain bends down, gently touches her cheek and says, “Don’t you worry, girl. I will accommodate you.” He starts to walk away, but then turns around, pulls a pistol and shoots the poor woman dead.

This is definitely one of the most brilliant, stunning, unsettling, horrific, and tragic openings to a movie in recent memory.

From this impressive though disturbing opening, the story then focuses on the story of the black woman who was carried by the horse in the beginning. The slave plantation seems to be run by a group of Confederate soldiers, led by a General, who’s made the woman his slave mistress. In the next scene after the opening, the General enters her cabin and forces her to say her slave name, Eden, by hitting her and branding her with a hot iron on her lower back.

Later, a new female slave tries to convince Eden to lead an escape attempt. Eden tells her to wait and have patience, saying the time isn’t right yet.

Things on this slave plantation are not what they seem, however. An unexpected flashback shows viewers how Eden was kidnapped and enslaved. Her real name is Veronica, but the General changed her name, just like all the other slaves, after his men kidnapped her. The movie then returns to the plantation, where another tragic event forces Veronica’s hand, making her decide that the time to escape is now. Will she succeed?

ANTEBELLUM is an intense, harrowing, suspenseful thriller. The ending is a rousing chase scene that will put any if not most viewers on the edge of their seats. The music is mesmerizing, especially in the harrowing scenes at the plantation, which helps a lot to set the story’s mood and progression. All the actors do a superb job, though one of the actresses who shows up later in the story is sometimes annoying.

ANTEBELLUM has a Christian worldview with strong moral elements. For example, the gold cross worn by the murdered black woman from the opening scene plays a major role in several important scenes later on in the movie. Also, a reference to loving your enemy is made later by someone. These Christian sentiments are opposed by a comment by the General at one point, who tells his white Confederate soldiers and friends, “We are descendants of gods.” By inserting this statement, the movie identifies paganism and polytheism with evil.

However, despite these elements, the Christian worldview is only a light one, because it’s marred by some leftist, feminist, politically correct elements, including some revisionist history. For example (POSSIBLE SPOILERS FOLLOW), a few scenes set in the present day feature a black woman spouting politically correct, leftist, feminist nonsense about American history, “patriarchy,” black women, and race relations. Happily, though, the movie ends with a speech on the soundtrack by an unknown woman, who talks about spreading love, compassion, humanity, and loving one’s enemy. “We are all brothers and sisters,” the woman says. In another short scene, the black woman who mentioned the evils of patriarchy tells her daughter she wants to change the minds of people who don’t like her and other black people.

ANTEBELLUM also contains lots of strong foul language, including many “f” words. It also has strong, intense disturbing violence that includes examples and references to people beating, killing and raping their “slaves.”

In dealing with the history of slavery in the United States, we should remember that, in reality, not only did some Africans sell their black brothers and sisters into slavery in the United States and the rest of the “New World,” but there were black slaveowners before the Civil War in almost every state, including several Northern states. In fact, according the U.S. Census of 1850, black slaveowners “owned” 10,000 or more slaves. Also, only 4% to 6% of African slaves went to the U.S. The vast majority went to Brazil, followed by the Caribbean. Furthermore, only about 25% to 36% of the Southern population actually owned slaves. Thus, much of the support for slavery in America came from fear among whites, not just racism or a desire to keep one’s slaves. Finally, slavery in the United States only lasted 246 years, not 400 years. (See Jae Jones, “Black Slave Owners During the Antebellum Period,” Black Then, Oct. 23, 2018, https://blackthen.com/black-slave-owners-antebellum-period/ and Naomi Schalit, “American Slavery: Separating Fact from Myth,” The Conversation, June 19, 2017, https://theconversation.com/american-slavery-separating-fact-from-myth-79620.) That said, it’s undeniable that, in all of human history, including the United States and Brazil, slavery is a brutal, often violent, system that’s been an evil stain on human existence since the beginning of time.