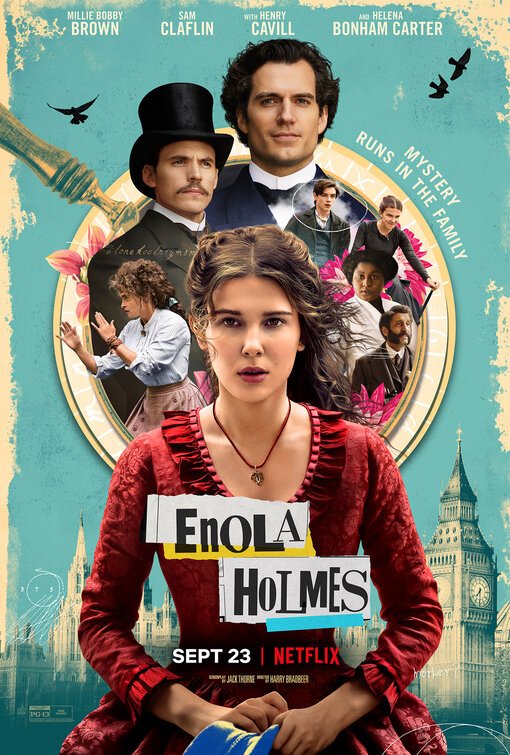 A Netflix original movie, ENOLA HOLMES, follows Sherlock Holmes’ teenage sister, Enola. When Enola’s mother disappears on her 16th birthday, Enola sets out to find out what’s happened to her. On her journey, Enola ends up in the middle of another mystery concerning Lord Tewksbury, a young boy she meets on the train. All the while, Sherlock isn’t far behind, doing his own sleuthing on Enola and his mother.

ENOLA HOLMES is a spirited tale full of exciting adventure, fine acting and vibrant music. However, it has a strong Romantic, politically correct feminist worldview. The movie teaches that the title character’s future is all up to her, that our lives are our own, and that we can find out who we are as a person without our family. No one, especially a man, can tell Enola what to do. Viewers learn that Enola’s mother is secretly fighting for women’s rights. The movie also involves some fight scenes involving the female heroine. The politically correct worldview and violence in ENOLA HOLMES are mitigated by some Christian, moral elements, but MOVIEGUIDE® advises extreme caution.

(RoRo, PCPC, FeFe, FR, Pa, C, B, L, VV, A, D, MM):
Dominant Worldview and Other Worldview Content/Elements:
Strong Romantic, politically correct feminist worldview where title character’s mother fights for women’s rights but goes to extremes and teaches her daughter that no one, especially a man, can tell her what to do, title character outsmarts her famous older brother to show him that she’s just as good as he is, heroine has to go and save a boy she met because he’s not as strong or smart as her, a comment about a corset being a form of oppression with other comments about body shaming and what a woman should be in society, title character believes she’s the only one who can solve the mystery and that she only needs herself and no one else, some false New Age pagan thinking teaches that the future is up to us and that life is our own, and that heroine is a finder of lost souls, mitigated by some solid Christian, moral elements includes a cross is on a headstone, someone says, “God help us,” courage and integrity and family are extolled, title character risks her life for a friend (she also tells a story about risking her life to save a sheep, which has echoes to Jesus being our Divine Shepherd), and a character says it’s good to care for others, unless it makes you vulnerable to losing your own life
Foul Language:
Four obscenities (“h” words), three light profanities such as “Good God,” “My God” and “Dear God,” and some light name calling
Violence:
Strong and light action violence includes teenage girl learns Jujitsu, to swordfight and to shoot a bow and arrow along with chemistry lessons that also involve using gunpowder, many fighting scenes (some of which involve the 16-year-old heroine getting punched and hit), a bike crash, light broken while playing table tennis, character slaps another character in face, character falls from landing where he was hiding, character dangles off train by someone wanting to kill him, characters jump and fall from moving train to save their lives, character tries to drown someone, character stabs teenage girl, but she’s not wounded, man hit with a metal kettle, character tries to choke and kill, characters are shot at in an attempt to kill, and one gets shot but doesn’t die, man hits teenage girl with rifle butt, and her head bleeds a little, man hits head, and some blood is seen, a feminist character makes bombs to make a political statement, and a character dies
Sex:
No sex scenes or sexual immorality
Nudity:
No nudity but 16-year-old girl appears in old-fashioned undergarments in a couple scenes
Alcohol Use:
Alcohol seen twice
Smoking and/or Drug Use and Abuse:
Three instances of pipe smoking; and,
Miscellaneous Immorality:
Strong miscellaneous immorality includes a dysfunctional family portrayal, teenage rebellion, greed, deceit, bribery, and one of 16-year-old girl’s two older brothers wants to “tame” his “wild” sister by sending her to finishing school.

ENOLA HOLMES, an original Netflix movie, follows Sherlock Holmes’ teenage sister, Enola, another clever detective, who looks for answers to her mother’s sudden, mysterious disappearance. ENOLA HOLMES is fun and adventurous, with great performances from all actors, but the movie’s Romantic, feminist worldview is a bit politically correct, contains some fighting involving a teenage girl and warrants extreme caution.

A Netflix original movie, ENOLA HOLMES opens with Enola telling the audience about her life as a child. Enola explains that her father died when she was young, and her older brothers, Mycroft and the iconic detective Sherlock, both left soon after that. Now, it’s just Enola and her mother.

Enola’s mother taught her all about reading, self-defense, how Enola could be anything she wanted, and word games, something her mother loved. In fact, Enola’s name spelled backwards is alone, she points out, which will come in handy later. Enola says she and her mother had a nice life in the country by themselves, but her mother loved her privacy.

On the morning of her 16th birthday, Enola wakes up to a quiet house. Enola’s mother has left her all alone, but she does leave Enola a present that the maid gives her. It’s a box of cards that has flowers and different sayings on them, as well as a bag of letters for deciphering. The gift comes with instructions. Enola just has to figure out what they are, because she knows her mother would never leave her on purpose.

Later that day, Enola goes to pick up her estranged brothers from the train station. Mycroft and Sherlock are shocked at how tomboyish their younger sister has become. They have no idea what they were getting themselves into with her. Enola takes them home, only for them to be more shocked at how their mother let the house fall apart. Mycroft is disgusted that Enola hasn’t had any formal education or learned any ladylike manners, but Sherlock is indifferent about it.

Mycroft decides that, since Enola is now his responsibility, he will send her to finishing school. However, all Enola is worried about is finding her mother, and she knows that Sherlock will be able to help. Enola watches Sherlock inspect her mother’s room. Later that night, Enola herself begins to unlock the secret instructions her mother left her in her birthday present. Enola finds the clues in her mother’s room that were left for her and knows she has to follow them.

The next morning, Enola leaves home intent on finding out what happened to her mother. Mycroft doesn’t discover Enola is gone until he goes to fetch her to catch the carriage to her new school. Mycroft is furious and will do everything he can to find Enola, while Sherlock is impressed by his younger sister. Sherlock now has to find out where Enola’s run off too while he also searches for his mother.

Enola sets off on her journey to London to find her mother. However, she has no idea of the twists and turns that await her when she boards the train for London.

ENOLA HOLMES is a fun, adventurous tale that focuses on detective Sherlock Holmes’ sister. It keeps viewers on the edge of their seats. Millie Bobby Brown is brilliant in the role of the clever, strong-willed, smart Enola. Brown is joined by veteran actors Helena Bonham Carter, Henry Cavill and Sam Claflin, who also shine in their respective roles. The vibrant, upbeat music adds to the exciting mystery unfolding before the viewer.

However, ENOLA HOLMES has a strong Romantic, politically correct, feminist worldview. The movie teaches that the title character’s future is all up to her, that her life is her own, and that she can find out who she is as a person without her family. No one, especially a man, can tell her what to do. Viewers learn that Enola’s mother is secretly fighting for women’s rights (a subplot apparently involves a proposal to Parliament to expand voting rights). The movie also involves some fight scenes involving the teenage heroine. The politically correct worldview and violence in ENOLA HOLMES are mitigated by some Christian, moral elements, but MOVIEGUIDE® still advises extreme caution.