"Marred by Some Rude Behavior and Fantasy Magic" 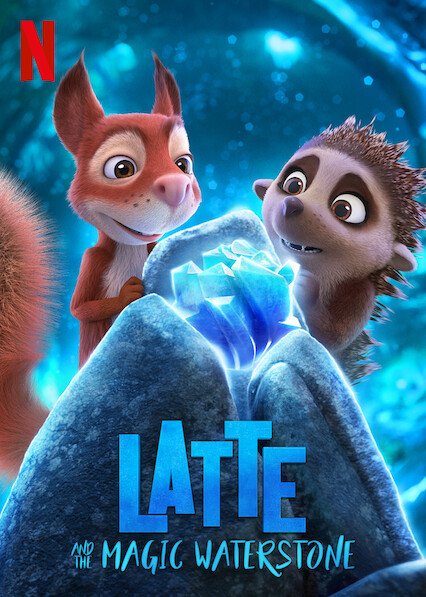 LATTE & THE MAGIC WATERSTONE follows a group of animals in a forest whose existence is threatened by a horrible drought. A lonely hedgehog named Latte volunteers to go on a quest to retrieve the magical waterstone from the greedy bear king to save the forest. She’s reluctantly joined by a timid squirrel named Tjum. Tjum tries to convince Latte to return home. They get separated at the border to the bear king’s realm. Tjum must face his fears to save his family and forest. Meanwhile, Latte must come to grips with her past and learn to trust her friends.

LATTE & THE MAGIC WATERSTONE is an entertaining animated movie full of adventure, friendship, bravery, and sacrifice. However, the movie sometimes fails to create enough room for the characters to grow in meaningful ways. Many of the characters remain rude or bullies, and the few changes that do occur seem unwarranted. Despite the movie’s noble themes of courage, sacrifice and perseverance, the negative elements in LATTE & THE MAGIC WATERSTONE mar some of the movie’s meaningfulness. So, MOVIEGUIDE® advises caution for children.

(Pa, O, B, C, Ab, V, M):
Dominant Worldview and Other Worldview Content/Elements:
Light mixed pagan worldview with fantasy magic where characters are motivated by the legend of a magical stone, the stone ends up being real and provides water, mixed with some moral, redemptive elements like bravery, sacrifice, perseverance, and friendship, but children animals are often rude to parental authority and to each other
Foul Language:
No obscenities or profanities, but plenty of name calling and insults including stupid, dumb, idiot, freak, crazy, and nutjob are said by child animals, plus many of the characters bully each other throughout the movie with no apologies
Violence:
Mild cartoon violence and peril, characters are chased by a lynx and confronted by a pack of wolves and chased by an angry bear, a lynx is hit on the head by a falling tree and is knocked unconscious, temporarily, the world has sentient animals and a lot of the characters eat bugs and fish, and fish skeletons are shown after bears eat the fish
Sex:
No sex
Nudity:
No nudity
Alcohol Use:
No alcohol
Smoking and/or Drug Use and Abuse:
No smoking or drugs but two characters in one scene are given pollen from a toad, which puts them to sleep;
Miscellaneous Immorality:
There’s a general theme of disobedience and a lack of respect shown by children animals to their parents, parents play the role of the antagonist for a good part of the story, some bullying, and some children make fun of someone who lost her father.

Streaming on Netflix, LATTE & THE MAGIC WATERSTONE is an animated fantasy from Germany and Belgium with English-speaking actors about an independent hedgehog who tries to fit in with the other forest animals, but eventually volunteers to go on a magical quest to save the forest from a terrible drought.

The opening cuts to a family of rabbits who visit a muddy riverbed to play. Watching from a tree is Tjum, a squirrel. It appears he’s debating whether or not he should join the group frolicking in the mud.

Tjum decides to join them, but the rabbits immediately make fun of him and tell hm to leave. Latte, an independent hedgehog who calls herself Princess Latte, hears the interaction and decides to scare them all by pretending to be a monster. Whether in defense of Tjum or not, Tjum freezes out of fear, and the ridicule only increases. Latte then tries to bully the bullies, but everyone departs unhappy.

Tjum is back up in his tree when he drops a walnut right in front of Latte’s home. Embarrassed by the earlier events, he tries his hardest to avoid her. Latte hears him, however, and begins teasing him. Tjum gets distracted by Latte’s water. The forest is experiencing a terrible drought, and Tjum snatches Latte’s water and takes it to a large pumpkin holding the animal community’s water reserves. Tjum accidentally falls into the reserve, demolishing the pumpkin. All the water spills away, leaving no water reserves.

The adults have a council debating their next move. They direct all their hostility toward Latte, but Tjum ends up confessing about the water accident.

Tjum thinks this is a horrible idea and goes to try to stop Latte. However, after encountering a lynx and helping each other escape, Tjum is reluctantly sucked into Latte’s quest, and they set out together for the waterstone. Together, they enter many perilous situations and use bravery and wits to survive their quest for the waterstone.

They get separated at the border to the bear king’s realm. Tjum must face his insecurities head-on to return home and possibly save his family and the forest. At the same time, Latte comes to grips with who she truly is and discovers real friendship.

LATTE & THE MAGIC WATERSTONE is an entertaining animated movie full of adventure, friendship, bravery, and sacrifice. Although there is a lot of opportunity for friendship’s importance to take center stage, the movie sometimes fails to create enough room for the characters to grow in meaningful ways. Many of the characters remain rude or bullies, and the few positive changes that do occur seem unwarranted. The movie also contains some fantasy magic. Despite the movie’s noble themes of courage, sacrifice and perseverance, the negative elements in LATTE & THE MAGIC WATERSTONE mar some of its meaningfulness. So, MOVIEGUIDE® advises caution for children.