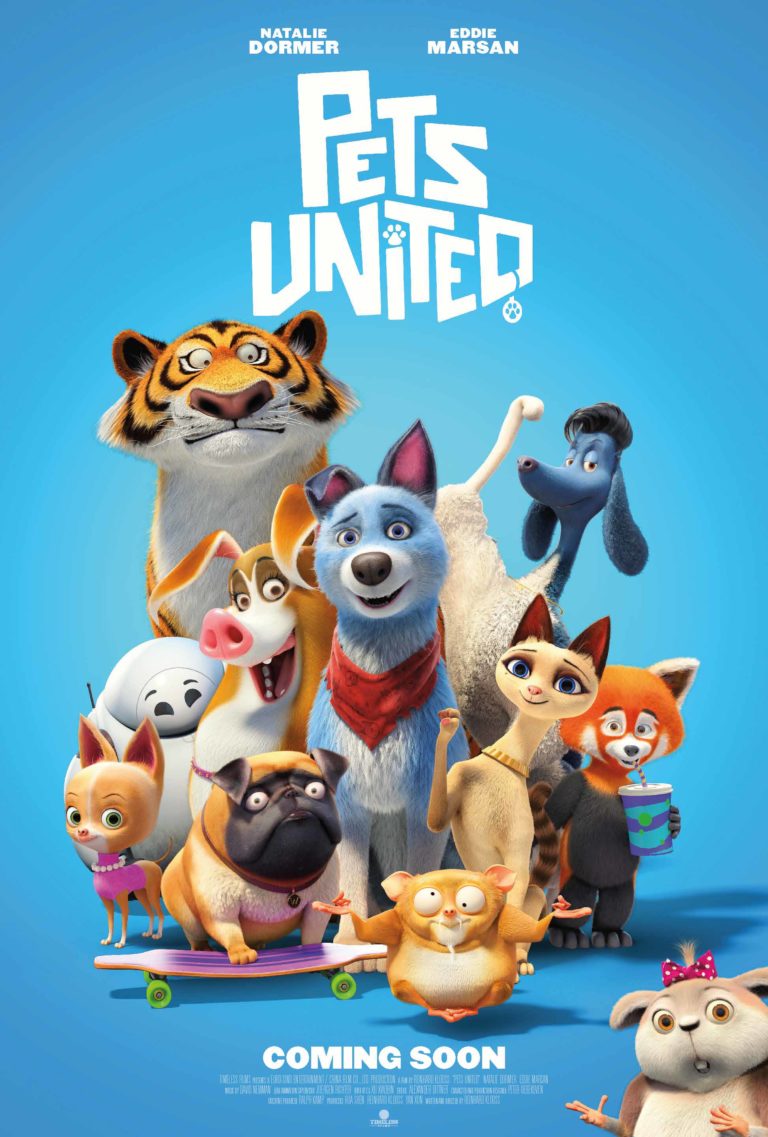 A Netflix original animated comedy, PETS UNITED follows Roger, a stray dog, when his home of Robo City is threatened by the evil Mayor Frank. Roger and his robot friend, Bob, wander into Pamper Pets, a spa for the pets of rich citizens, to take cover from being chased by robot cops. They learn Mayor Frank is kicking the humans out of town to replace them with robots because robots create much less waste. Roger and the other pets abandoned at the spa by their owners have to unite together to save the city.

PETS UNITED has so much action that it’s hard to follow. Furthermore, even the parts that were supposed to be funny were not. PETS UNITED has a light moral, redemptive worldview. The pets stick together, sacrifice themselves to save others, fight evil, and eventually overcome the humanistic, environmentalist schemes of the evil mayor to create a perfect society without failure and waste. However, PETS UNITED also has some unnecessary violence and vulgar language that’s sometimes hard to hear due to different accents. So, MOVIEGUIDE® advises caution for older children.

(B, C, H, E, Ab, L, VV, N, M):
Dominant Worldview and Other Worldview Content/Elements:
Light moral, redemptive worldview with humanist, environmentalist elements where pets stick together, sacrifice themselves to save others, fight evil, and overcome a humanist, environmentalist mayor who wants to create a perfect world with no failure so he runs out the humans and says he’ll get rid of them if they don’t leave, and he creates robots to replace people, because robots don’t create as much waste as the humans, but some of the pet owners are selfish and flee the city leaving their pets to fend for themselves, one pet makes a comment about an owner worshipping the ground where her dog walked, and some pets are extremely materialistic
Foul Language:
One “h” obscenity, poop is mentioned, name calling, a comment about passing gas
Violence:
Strong cartoon violence includes a chase in a supermarket where food and cans fly around and things are destroyed, a robot loses its head and then puts it back, Ferris wheel breaks down and turns into a gigantic robot spider that takes over the town, animals hit other animals, knives are thrown at animals, a train the animals are riding derails and crashes, air ball gun is used, animals are almost smashed
Sex:
No sex
Nudity:
Naturalistic animal nudity
Alcohol Use:
No alcohol
Smoking and/or Drug Use and Abuse:
No smoking or drugs; and,
Miscellaneous Immorality:
One animal steals food because he has none but shares it with other needy stray pets.

A Netflix original animated movie, PETS UNITED opens in Robo City, a futuristic town filled with robots, humans and pets. Roger, a stray dog who’s wanted by the police for robbery is roaming the streets looking for food when he has a close encounter with robocop Bill. Roger escapes and tells the audience two things: He really hates cats, and he rules the night.

That evening, Roger roams into an apartment building and finds himself on the balcony of a nice suite at the top. Roger walks inside like he owns the place, but finds a cat sleeping peacefully. Quietly, he heads to the fridge looking for food. Roger accidently wakes the cat up as he’s trying to get some food. At that point, the owner comes home and finds Roger and the cat, whom she calls Belle, going at it. Roger escapes and then heads to the supermarket.

At the supermarket, Roger gets involved in a chase with robocop Bill, and somehow manages to get away with some goods. Roger heads back to the alley where the stray animals live and passes out some food to each of them. In the alley, Roger meets an emo-gadget named Bob, a robot pet that shouldn’t be there or be alive as they have all been destroyed by order of the mayor.

As morning approaches, Mayor Frank makes a city-wide announcement that the citizens should enjoy themselves this morning, as something is going to happen that afternoon. Just seconds later, robocop Bill bulldozes the alley where the strays live and scatters the animals. Only Roger and emo-gadget Bob are left and are nearly captured, but Bob comes in handy, helping them escape a net that grabbed them.

Cut to the swanky apartment where Belle lives. Belle’s owner takes her to Pamper Pets, a spa-like gym, for the day where several other pets have already been dropped off. These pets are super materialistic and annoying, but Belle doesn’t really fit with them. As Belle is dropped off, Roger and Bob are trying to flee robocop Bill, but they’re being chased by mini-cops. Roger and Bob flee into Pamper Pets to lose the bad guys.

While in Pamper Pets, Mayor Frank announces that the town is going to be taken over by his robots as the people aren’t perfect enough and create too much waste. Mayor Frank gives the citizens the afternoon to get out or something bad will happen. Sadly, all the owners who dropped their pets off at Pamper Pets forget about them and leave. Now, Roger, Bob and Belle, along with some help from other pets, must make find a way to stay alive and save their town from the evil Mayor Frank and his robots.

PETS UNITED has so much action happening that it’s hard to follow what’s happening or what the story really is. This makes it incredibly boring. The animation isn’t all that great, either. Also, the voice actors didn’t really add anything to the characters to help make the movie better. Finally, even the parts that were supposed to be funny weren’t. If you’re looking for some background noise, the movie will surely help you fall asleep.

PETS UNITED has a light moral, redemptive worldview. The pets stick together, sacrifice themselves to save others, fight evil, and eventually overcome the humanist, environmentalist schemes of the evil mayor to create a perfect society without failure and waste. However, the movie also has some unnecessary violence and vulgar language that’s sometimes hard to catch due to the different accents of some characters. So, MOVIEGUIDE® advises caution for older pre-teen children.