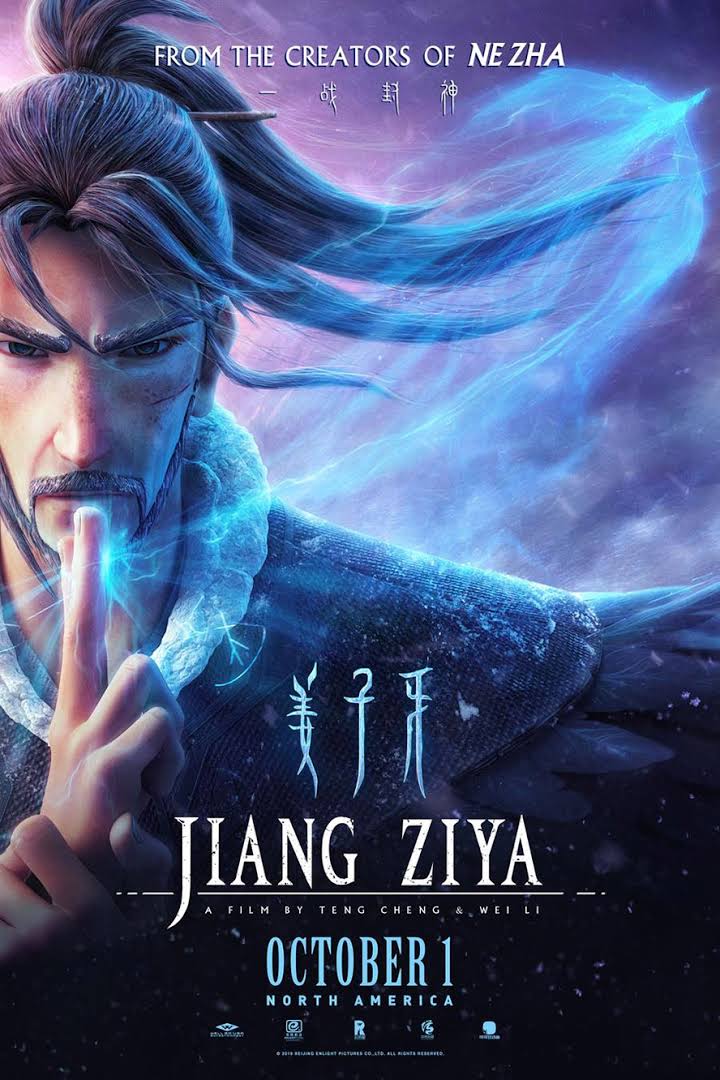 JIANG ZIYA is an animated mythological fantasy from China. About 3,000 years ago, a celestial army commander named Jiang Ziya defeats the demonic Nine-Tailed Fox Devil and her minions in a great war that engulfs the three realms of Heaven, Hell and Earth. The Revered Master, the “divine ruler” of Heaven, promises to make Ziya leader of the gods, but first he must execute the captured Fox Devil. However, the demonic creature has attached herself to the spirit of a teenage girl. “If I die, she dies.” So, Ziya stays his hand, and the Fox Devil escapes. Banished from Heaven, Ziya must decide if joining the ranks of the gods is worth the price of one innocent life.

(FRFRFR, PaPaPa, OO, B, C, LL, VV, N, A, M):
Dominant Worldview and Other Worldview Content/Elements:
Very strong false, pagan, polytheistic worldview with multiple gods, devils, ghosts, demons, supernatural powers, and reincarnation (the movie’s worldview seems to anthropomorphize its concept of heaven at one point, as Buddhism is wont to do), with a false occult view about the ghosts/souls of “resentful” dead people having to be lifted up to Chinese Taoist/Buddhist “heaven” by large magical white swallows, and some moral, redemptive elements extolling justice, hope, peace, sacrifice, truth, saving people’s lives, and including a character in an epilogue who says there’s a “deity” who’s “far above the Ninth Heaven”
Foul Language:
11 obscenities, zero profanities, and a boy character is shown urinating with his back turned to the viewer
Violence:
Lots of strong, often scary action violence includes a Nine-Tailed Fox Devil who uses her supernatural power and powerful tails to attack the good guys and imprison and demonically possess a teenage girl, supernatural beings often unleash supernatural beams of energy that cause explosions, a mob chases a teenage girl, scary ghosts threaten and try to grab characters, animated scenes of war, the bones of war victims have been used to create musical “chimes” in a desert
Sex:
No sex
Nudity:
Brief upper make nudity
Alcohol Use:
Brief alcohol use in a saloon scene (mostly implied)
Smoking and/or Drug Use and Abuse:
No smoking or drugs; and,
Miscellaneous Immorality:
A major character lies to the hero and hides an important truth from him, girl steals a map, a father coldly gives away his daughter to the Emperor in marriage against her will, and there’s a cruel god among the gods in the story.

JIANG ZIYA is an animated mythological fantasy from China about a celestial army commander who defeats a terrifying Fox Devil and her minions in a great war, but balks when the Ruler of Heaven commands him to execute her because he learns the devil’s life is tied magically to that of an innocent teenage girl. JIANG ZIYA has some colorful animation and an absorbing story, with some surprising moral, redemptive elements, but it is too long, is sometimes confusing, and has a strong false, pagan, polytheistic worldview with multiple gods, devils, ghosts, demons, supernatural powers, and reincarnation.

To earn his place as the new leader of the gods under the Revered Master, the Divine Ruler of Heaven, celestial army commander Jiang Ziya must vanquish a terrifying fox devil threatening the very existence of the mortal realm. Ziya defeats the Nine-Tailed Fox Devil and her minions in a great war that engulfs all the three realms of Heaven, Hell and Earth, specifically China.

As a reward, the Revered Master lets Ziya ascend the Stairway to Heaven to the great hall of Heaven and grants him immortality. He also promises Ziya that he can become the leader of the gods under the Revered Master. However, before that can happen, the Revered Master says Ziya must execute the Nine-Tailed Fox Devil. Just as he’s about to carry out the order, Ziya sees that the female devil has magically entrapped an innocent teenage girl in her being. “If I die, she will die too,” the Fox Devil tells him. So, Ziya stays his hand from executing her, and she escapes. The Revered Master and the other celestial beings believe Ziya has succumbed to an illusion from the Fox Devil. So, the Revered Master banishes Ziya to the province where the Fox Devil’s minions who survived the war have also been banished.

Ten years later, Ziya wakes from a self-imposed slumber. He visits the local saloon where the fox demons like to gather. A teenage girl walks into the saloon. Ziya recognizes her as the girl entrapped by the Fox Devil. The girl tries to buy a map to a place where black flowers bloom. She’s told they bloom near a sacred mountain. However, the attempted sale goes wrong when the people in the saloon see that she has the ears of a fox demon. A group of the Fox Devil’s minions who reportedly were wiped out during the war. Ziya and his magical animal companion, who acts like a pet cat, end up with the map, while the people in the bar chase after the girl.

Ziya runs after the girl outside, but she crosses the border. He decides to break the terms of his banishment to follow the girl. As night falls, Ziya is still chasing the girl, but she’s double-backed and tries to take the map from him. After escaping some scary forest monsters, the girl, who thinks her name is Jiu, denies that she’s a fox demon, although she has ears like one and can’t remember how she got them. She believes her human father lives among the black flowers near the sacred mountain. Ziya is desperate to know the truth about this girl who he saw entrapped by the Fox Devil in the great hall of Heaven. So, he agrees to help her finish her journey to the sacred mountain.

More scary adventures await Ziya and the girl, including violent encounters with the Fox Devil. They learn that, if Ziya kills the Fox Devil, as the Ruler of Heaven has commanded, the girl will surely die, because her life is still magically tied to the Fox Devil. Eventually, Jiang Ziya must decide whether becoming leader of the gods is worth the price of one innocent life.

JIANG ZIYA is loosely based on a story from a 16th Century Chinese novel titled, THE INVESTITURE (or CREATION) OF THE GODS. It has some colorful animation and an absorbing story, with some surprising moral, redemptive elements. However, it’s too long and sometimes confusing, even in the opening scenes where the war and Ziya’s failed execution of the Nine-Tailed Fox Devil in “Heaven” are quickly introduced.

JIANG ZIYA has some surprising moral, redemptive elements. For example, a search for truth is part of the story. Also at one point, there’s an interesting debate between Ziya and “Revered Master,” the “Ruler” of the movie’s Chinese/Taoist/Buddhist Heaven, about whether to execute the Fox Devil, even though it will also kill the teenage girl, who has actually been possessed by the Fox Devil, who has a menacing female voice. The Revered Master says killing the Fox Devil will be for the “greater good,” adding that, “For a god, kindness shown only to one person is a sin.” However, Ziya replies, “I only want to save every person I can.” When Ziya tells the gods in Heaven during the execution scene that he sees an innocent girl is trapped inside the Fox Devil, the Revered Master reminds Ziya and the other heavenly beings assembled that the Devil is an expert at using illusions to manipulate the minds of people and supernatural beings. In the movie’s second half, Ziya takes a moral stand, declaring, “Neither gods, devils or humans should be oppressed, manipulated or denied salvation.” This leads him to do a heroic act to restore justice, peace and hope in the world. Finally, in a brief epilogue to the story of Jiang Ziya, a teacher sitting on a river bank tells his young student that there’s another “deity” who’s “far above the Ninth Heaven” (in Chinese mythology the supernatural world in the sky above Earth is divided into nine heavens or nine celestial provinces).

Despite all this, however, JIANG ZIYA has a very strong false, pagan, polytheistic worldview with multiple gods, devils, ghosts, demons, supernatural powers, demon possession, and reincarnation. At one point, reincarnation is used to solve a major plot problem in the movie. The scene where this happens has some disturbing echoes of human sacrifice, an evil practice that’s soundly condemned by God in the Bible (see the list of “loathsome” sins condemned by God in Leviticus 18:1-30). The movie’s polytheistic view of the supernatural world reflects China’s Taoist/Buddhist spiritual traditions. In those traditions, there are sometimes multiple gods and even the concept of Heaven itself becomes an impersonal deity reflecting a pantheistic tradition that eventually degenerates into the atheist concepts of Buddhism.

However, studies of the history of ancient religion in China have shown that, in the distant past, many Chinese believed in a One True God who makes moral demands on human beings, a benevolent, eternal, all-powerful, all-knowing, immutable, personal Creator God who punishes the bad and rewards the good according to the essential, eternal moral attributes that are part of His eternal, divine character. After all, like everyone else, the Chinese people are descended from the family of Noah and from the people that God dispersed throughout the world in the biblical passages about the story of the Tower of Babel.

Titled LEGEND OF DEIFICATION in some countries overseas, JIANG ZIYA also has some unnecessary foul language and some scary violence involving scary supernatural or magical creatures.