"Do Health and Happiness Go Hand-in-Hand?" 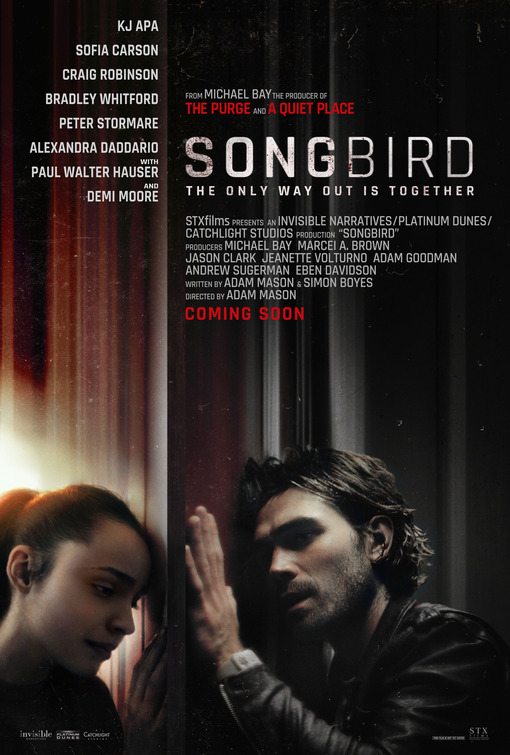 SONGBIRD is a dramatic science fiction thriller about a fictitious virus, COVID-23. In the movie, COVID-23 has infected the world. The plot focuses on a few Los Angeles residents who have their own needs for human connection despite mandatory quarantine orders. Tensions come to a new high when a woman’s grandmother starts to feel terrible. On taking her temperature scan one morning, they discover she has the deadly virus. Meanwhile, the woman’s boyfriend pursues an immunity bracelet for her.

Written, shot and released during the COVID-19 pandemic, SONGBIRD is impressively shot, with compelling moments. It has a mixed pagan worldview with Romantic, moral elements. Characters care for other people’s health and take drastic measures to ensure it. There’s also a sense of loyalty and hope throughout the movie. The Romantic elements come into play when some characters idealize what could be if not for the pandemic. One villain goes so far as to declare he’s a “god” because he’s immune to the virus. MOVIEGUIDE® advises extreme caution for SONGBIRD because of lots of foul language, some extreme violence and brief lewd content.

(Pa, BB, Ro, C, Ab, FR, P, LLL, VVV, SS, N, A, D, M):
Dominant Worldview and Other Worldview Content/Elements:
Light mixed pagan worldview about a new global pandemic with moral and Romantic elements such as characters care for other people’s health and take drastic measures to ensure it and there’s a sense of loyalty and hope running through the movie too, subtle Christian elements where one character labels the pandemic as “the Fall” and mentions angels, but the Romantic elements come into play when some characters idealize what could be if not for the global pandemic, plus two villainous characters do whatever they want for personal gain, and one of them goes so far as to declare he’s a “god” because he’s immune to the virus, but it’s clear they are bad, and a patriotic element where a positive character is a veteran
Foul Language:
About 25 obscenities, five mostly light profanities (including two strong Jesus profanities), an obscene gesture in one scene, and one woman calls her boyfriend stupid in one scene, but it’s meant to be endearing and joking
Violence:
Some very strong, strong and light violence includes character threatens to kill someone, woman hits a man with a baseball bat and knocks him unconscious, character gets shot through the head, and although it’s not directly shown, viewers see blood splatter, man gets stabbed in the jugular with a pencil, and there’s blood shown, wife points a cocked gun at her husband, some scenes with hand to hand combat, and one scene with choking, another instance of stabbing with no blood, mention of war, and a mention of a young girl getting dragged away against her will
Sex:
Husband goes to seek sexual comfort from a young woman and kisses her on the mouth when she’s on top of him, and a dating couple kisses on the mouth
Nudity:
Adult man is shirtless in a few scenes, and viewers see part of his bare rear end in a shower scene, plus another man is seen without his shirt twice
Alcohol Use:
Alcohol use
Smoking and/or Drug Use and Abuse:
A villain smokes and remarks he likes the idea that something has the power to kill him since he’s immune to the virus; and,
Miscellaneous Immorality:
Marital discord, lying, name-calling.

SONGBIRD is a dramatic science fiction thriller about a new fictitious virus, COVID-23, that’s infected the world and focuses on selected residents in Los Angeles who have their own needs for human connection despite mandatory quarantine orders. Impressively shot, with some compelling moments, SONGBIRD has a mixed worldview with Romantic and moral elements and warrants extreme caution for lots of foul language, some extreme violence and lewd content.

SONGBIRD begins with Nico, a twentysomething courier in Los Angeles, during a new coronavirus pandemic, called COVID-23. Nico makes countless deliveries to wealthy citizens in Beverly Hills and the tri-state area. The only reason he can make his deliveries is because he’s immune to the virus and has a bracelet that says as much to anyone who sees him in public.

Meanwhile, Nico’s girlfriend, Sara, and her grandmother, Lita, stay in their apartment and communicate with Nico via FaceTime on their phones. Nico’s boss, Lester, orchestrates all deliveries and uses GPS to track his employees’ whereabouts, with the help of a disabled veteran named Dozer, who is by himself in his place.

In Beverly Hills, one of Nico’s high-profile clients are Piper and William Griffin. Piper and William have a 12-year-old daughter who’s high risk. Piper is more militant about staying indoors, while William makes every excuse in the book to venture outside. Somewhere else in Los Angeles, a singing video blogger, May, had aspirations to sign a record deal until COVID-23 struck the world.

Each day, residents must take a temperature scan using their phones, which tells them if they have COVID-23 or not. One day, however, Lita, Sara’s grandmother, says she doesn’t feel well and develops a nasty cough. Sara gets nervous, but Nico, who visits each night on the other side of their apartment door, asserts that everything’s going to be okay, and he’ll find a way to get them both immunity bracelets. To do so, Nico asks his boss Lester where he can get more bracelets. Lester rats on the Griffins, who’ve been running a black market operation with immunity bracelets, which Nico’s been delivering to them all along.

Meanwhile, a sketchy William Griffin has been cheating on his wife with May. May, however, becomes resolved to not let it happen again. Through her video blog, she finds comfort in FaceTime conversations with Dozer. The pair become friends and open up to one another about their lives, since they’re hungry for meaningful conversation.

Regrettably, Lita dies of COVID-23, which makes Sara all the more a target to go to a Q-zone, which most people don’t come back from since they’ve been directly exposed. Nico continues his pursuit of an immunity bracelet, although the odds are stacked against him, and Piper confronts William abut his infidelity. May also hatches a plan to be free from William.

What will become of all these people?

SONGBIRD is an impressive movie, considering it was written, shot and released all during the COVID-19 pandemic in 2020. The color correction in the movie will remind viewers of another Michael Bay project, the TRANSFORMERS movies. SONGBIRD has some cool establishing shots mainly to introduce viewers to the desolate L.A. landscape. However, some handheld shots are a bit distracting, although they fit the feel of the movie.

SONGBIRD has a mixed moral and Romantic worldview. Characters care for other people’s health and take drastic measures to ensure it. Also, there’s a sense of loyalty and hope that runs through the story. There are some subtle Christian elements where one character labels the pandemic as “the Fall” and mentions angels. If there’s a Fall, however, where’s the Savior? The movie’s Romantic elements come into play as some characters idealize what could be if not for the global pandemic. Two villainous characters display some pagan characteristics where they do whatever they want for personal gain. Also, one of them goes so far as to declare he’s a “god” because he’s immune to the virus. It’s clear these two guys are bad, however. MOVIEGUIDE® advises extreme caution for SONGBIRD because lots of foul language, some extreme violence, and brief lewd content.