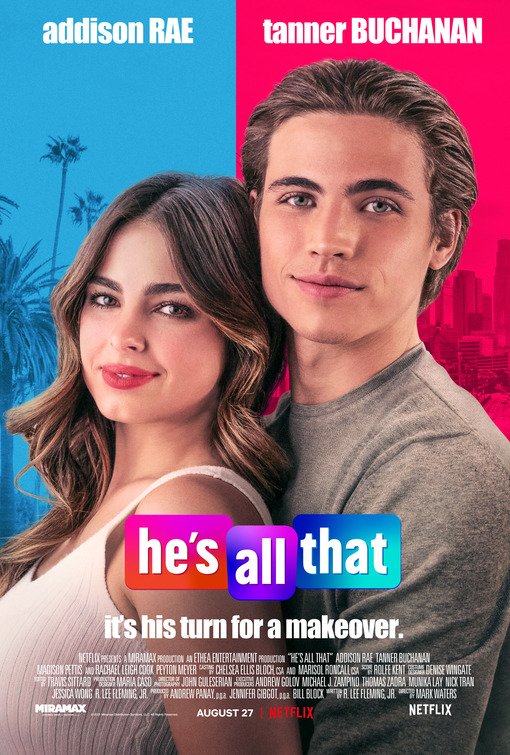 HE’S ALL THAT takes the 1999 romantic comedy SHE’S ALL THAT and reverses the roles of the leading characters. In this Netflix movie, Padgett Sawyer loses many social media followers after a viral breakup video. Padgett planned on using her sponsorship money from social media to pay for college. So, she hatches an idea to makeover a “loser” to a popular prom king to gain the attention of more online followers. The only catch is, Padgett’s friends get to pick the guy and the clock’s ticking as prom approaches.

HE’S ALL THAT has some entertaining, funny moments, despite some cheesy dialogue and acting. It has a mixed humanist, moral worldview where the lead female character uses her own resources to get what she wants, but she ultimately apologizes for hurting people along the way. The movie has some pro-capitalist sentiments, a comment about Christmas and Hannukah, and a joke comparing social media to cults. However, HE’S ALL THAT has excessive foul language and strong sexual content, including a minor homosexual subplot and references to a lesbian couple,. So, MOVIEGUIDE® advises extreme caution.

(Pa, H, B, Cap, Ho, C, FR, LLL, V, SS, N, DD, M):
Dominant Worldview and Other Worldview Content/Elements:
Mixed pagan worldview with humanist, moral elements where the lead female character tries to take matters into her own hands to gain popularity, fame and funds for college, but positively she learns the value of not living life through her smartphone and social media, she must apologize for hurting people, and she learns the consequences of always trying to make things go her way, with some pro-capitalist sentiments where a daughter acknowledges the hard work of her single mother to provide for the family and lead character has a social media business to raise money for college, some homosexual references where teenagers speculate that a teenage girl is a lesbian, and two girls go to prom together, a mention of Christmas and Hannukah, and a character likens social media to a cult
Foul Language:
26 obscenities (including one “f” word), 15 light profanities (mainly OMG), some vulgarities, a mention of a toddler spitting up, mention of farting, a character goes viral on the Internet for having a snot bubble, teenagers shovel horse manure for work, teenager spits out milk onto a counter, and former girlfriend tells her old boyfriend to “blow me”
Violence:
Some light violence includes slapstick bullying such as teenager gets thrown into a trash can, a locker gets slammed on teenager’s head and food gets thrown in teenager’s face, plus an angry girlfriend throws baked goods at her cheating boyfriend ,and two teenagers get into a fistfight, and one ends up on the ground
Sex:
Strong but mostly implied sexual content overall includes girlfriend walks in on her boyfriend and another girl fornicating, but nothing is shown, couple kisses, suggestive dancing and grinding at a pool party, crude sexual innuendoes and comments, and some homosexual references
Nudity:
Upper male nudity and girls appears in bikinis in several scenes and implied lower male nudity
Alcohol Use:
No alcohol use, but teenagers have a “mocktail”
Smoking and/or Drug Use and Abuse:
Nurse recounts a story of a meth head in the E.R., and a teenager pretends to smoke with his fingers; and,
Miscellaneous Immorality:
Name-calling, bullying, character makes a threat, and lying.

HE’S ALL THAT is a romantic comedy on Netflix about a female high school social media influencer who must makeover her prom date for a bet, without him knowing, of course. HE’S ALL THAT has its entertaining, funny moments, but it has a mixed humanist, moral worldview where the lead female character uses her own resources to get what she wants but ultimately must apologize for hurting people, with excessive foul language and strong sexual references, which warrants extreme caution.

The movie opens on a teenage social media influencer, Padgett Sawyer, as she gets ready for her day and invites her hundreds of thousands of social media followers to watch her daily activities. Next, Padgett greets her mother, a nurse, in the kitchen. Her mother seems overworked, and Padgett is more than happy to contribute to the bills with her social media influencer sponsorship money.

After school that day, Padgett and her friends, Alden and Quinn, show up to Padgett’s boyfriend’s music video to shoot some content for Padgett’s followers. Upon arrival, however, Padgett walks in on her boyfriend, Jordan, and another girl. Heartbroken and angry, Padgett reacts by throwing baked goods at his face. Unhappily for Padgett, her friend Alden catches the whole incident on camera, and it’s not pretty.

As a result of this viral breakup, Padgett loses her biggest sponsor, which makes her fret. How will she possibly be able to afford college now?

Padgett and her friends come up with a bright idea to fix things. Why doesn’t she makeover a guy from school by the time prom occurs? Then, her followers go on a transformation journey and that will bring her more attention and hopefully new sponsorships. There’s only one catch: her friends get to pick the guy.

Enter Cameron, a sour photography enthusiast with only one friend and a little sister, who just so happens to be a big fan of Padgett’s. Since Padgett knows Cameron and his sister, she strikes up a friendship with Cameron that looks to offer all that she wants, but will her big plans turn out the way she expects?

HE’S ALL THAT has some entertaining moments. It functions like any average coming of age movie with some elementary acting and sometimes cheesy dialogue. That said, HE’S ALL THAT isn’t trying to be anything it’s not and might tug on the nostalgia of its 1999 predecessor SHE’S ALL THAT, which also featured Rachel Leigh Cook and Matthew Lillard.

HE’S ALL THAT is a product of its time which is both a pro and con. The movie is an obvious commentary that social media is rarely what it seems like on the surface, which is a valuable lesson for the teenagers the movie hopes to draw. Still, the teenagers use gratuitous foul language, talk about hooking up and often hurt one another at the expense of their desire to achieve fame.

Thankfully, however, the story is ultimately redemptive. For example, HE’S ALL THAT has a mixed humanist, moral worldview where the lead character uses her own resources to get what she wants, but she ultimately must apologize for hurting people along the way. She also learns the consequences of always trying to make things go her way and the value of not living life through her smartphone and social media. The movie also has some pro-capitalist sentiments where she has her own business to earn money for college and where she acknowledges the efforts of her single mother to provide for the family. Other mixed content includes mild references to a lesbian couple plus a positive but comical comment about Jewish and Christian holidays and one joke about social media being like a cult. However, HE’S ALL THAT also has excessive foul language and strong sexual content, including a minor homosexual subplot. So, MOVIEGUIDE® advises extreme caution.

Watch HE’S ALL THAT: