"Determining the Price of the Lives Lost on 9/11" 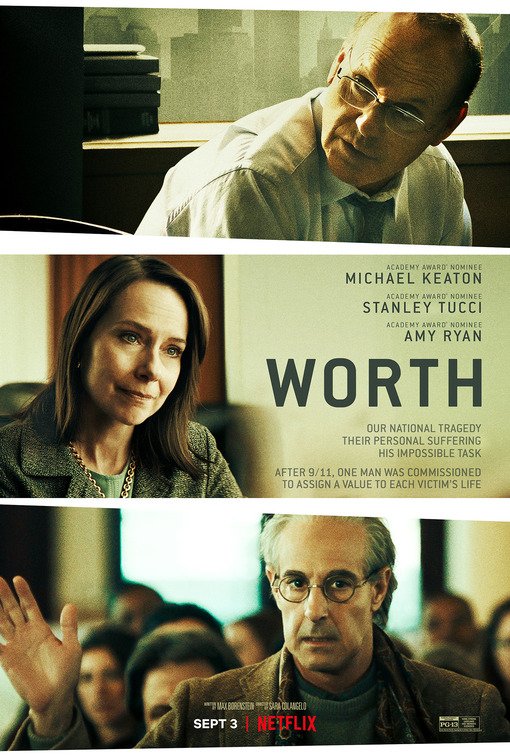 WORTH is a Netflix drama about the aftermath of the September 11, 2001 terrorist attacks on the World Trade Center and the Pentagon. Congress appoints renowned attorney and mediator Ken Feinberg to create a September 11 Victims’ Fund to compensate the victims’ families. With the help of his firm’s operations director, Feinberg creates a formula, but he must gain an 80% enrollment, or the plan will fail. A grieving widower dislikes Feinberg’s formula, because it doesn’t consider that all life is of equal value. At the “eleventh hour,” Feinberg only has 18% support. He must change his strategy, but how?

WORTH is well done, with excellent acting by Michael Keaton as Feinberg. Previously unknown details about 9/11 are revealed in a dramatic fashion. The movie upholds a Christian, moral worldview promoting the value and dignity of every life. However, the story hangs on themes of equality for a same-sex couple and a family with children stemming from an extramarital affair. These themes feel like gratuitous political statements, not honest storytelling. WORTH also contains some strong obscene language. So, MOVIEGUIDE® advises extreme caution.

(C, BB, PC, Ho, H, L, V, S, M):
Dominant Worldview and Other Worldview Content/Elements:
Christian, moral themes promoting the importance and dignity of every human life, respecting life as sacred, and the main characters seek to uphold justice, but some statements about same-sex marriage and rights appear politically motivated and politicians seek to put a humanist price on what individuals are worth
Foul Language:
Three “f” words, one “GD” profanity and a few “BS” words
Violence:
Brief chaos scenes, some screaming heard, and some violent descriptions given by witnesses of the 9/11 attacks
Sex:
No sex scenes but a same-sex couple figures in part of the story
Nudity:
No
Alcohol Use:
No alcohol use
Smoking and/or Drug Use and Abuse:
No smoking or drugs; and,
Miscellaneous Immorality:
None.

WORTH illustrates the aftermath of the devastating attacks on the World Trade Center and The Pentagon on September 11, 2001. Congress appoints notorious attorney and mediator Ken Feinberg as Special Master of the September 11th Victim Compensation Fund. Feinberg’s job is to create a formula that would determine the monetary value of each life lost or wounded. There is some obscene language and minimal violence; so, some caution is recommended.

Ken Feinberg is a well-known mediator. He witnesses the horrendous terrorism attacks on civilians at the World Trade Center. With a sense of duty to help and to serve his country, he asks for the job to lead the task of getting compensation to the families of the victims of the attack.

Congress caves to pressure from big business, however, and quickly rewrites the laws to block lawsuits against large corporations. Congress argues that, if victims decided to sue, it would crash the economy. Meanwhile, Feinberg is willingly saddled with the burden of enrolling 80% of the victims into the victim fund, or it will fail, and he will fail. The pressure on him is compounded by a two-year deadline.

To meet the deadline, Feinberg employs the help of his firm’s head of operations, Camille, along with his entire staff. They face newly grieving family members as they set out to create and deliver a formula that can get everyone to agree. The idea that higher earning victims’ lives are more important than lower earning victims’ lives doesn’t sit well with those who believe each life is of equal value and importance.

An opposition team is formed and led by a grieving widower, Charles Wolf. Wolf goes head to head with Feinberg. He forms a 9/11 victim’s group called Fix the Fund. Wolf claims the fund is unfair because the formula doesn’t take into account the inherent dignity of each individual person. The idea that lives lost are merely numbers in a formula is repulsive to Wolf. Feinberg argues that he must stay objective to move a job of this scale to completion. Filled with frustration, Wolf leans toward joining a class action lawsuit as an alternative. This confuses the plot because Wolf asserts it is “not about the money.” However, a class action lawsuit is certainly about the money.

Eventually, Feinberg’s back is against the wall with only 18% enrollment. He must change direction. He can sign a slippery deal with a fellow politician or listen to his opponents and use the little time he has left to get to know the victims’ families, to see them as people and not numbers, in an attempt to win them over.

WORTH is well done, with some excellent acting from Michael Keaton as Feinberg. Previously unknown circumstances about 9/11 are revealed in a riveting, dramatic presentation. The real value and dignity of every life is the central theme. In addition, the main characters are seeking justice. Thus, the movie has a Christian, moral worldview. That said, the story also hangs on a few themes of equality for a same-sex couple and a family with children stemming from an extramarital affair. Given the fact that there are 5,560 claimants, these themes feel more like political statements and less like storytelling. WORTH also contains some strong obscene language. So, MOVIEGUIDE® advises extreme caution.