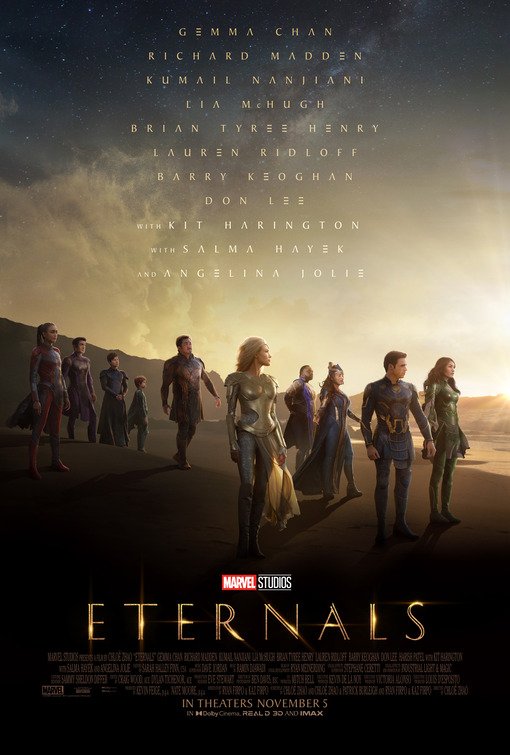 ETERNALS is a different kind of superhero movie from Marvel. An all-powerful supreme being sends 10 powerful, immortal beings called Eternals to protect humanity from a race of monsters called Deviants. Over time, the Eternals conquer the Deviants, or so it seems, but the Eternals remain on Earth to oversee humanity’s development. The Deviants reappear, however, after the Avengers brought back half of humanity. So, the Eternals get back together and battle this new threat. However, an apocalyptic threat against humanity develops and threatens to pit the Eternals against one another.

ETERNALS is beautifully photographed and has an epic quality to it. The action is often rousing and exciting, leading to a satisfying conclusion. Also, the character development is dramatically compelling. That said, the story suffers from too much exposition and some static dialogue. Even worse, although it promotes some Christian moral values such as love, family and sacrifice, the movie has a strong, false pagan mythology that erases Jesus from Creation and from human history. ETERNALS has a brief sex scene, a major homosexual character, some foul language, and revisionist history.

(FRFRFR, PaPaPa, HoHo, C, B, RHRH, Ev, LL, VV, SS, N, A, M):
Dominant Worldview and Other Worldview Content/Elements:
Very strong false pagan mythology about gods and superbeings erases God from Creation and human history, with a homosexual subplot for one of 10 major characters, and includes a pagan priest mentioning “the gods” during a marriage ceremony, but story borrows some Christian moral concepts about love, family, forgiveness, and sacrifice, plus strong revisionist history that credits a superbeing with developing some of the mythological stories of humanity’s past, such as the Babylonian story of Gilgamesh and the Greek and stories of the goddess Athena, and that totally blames the Spanish Conquistadores for the conquering of the Aztecs (in reality, the Aztecs oppressed fellow tribes and engaged in human sacrifice and 90% of the forces conquering the Aztecs involved local tribes seeking revenge against the evil Aztecs), and the movie blames humanity for the nuclear bomb that levelled Hiroshima when it was Imperial Japan that bears the primary responsibility for starting vicious wars against their neighbors and against the United States in the first place, and one mention of evolution
Foul Language:
8-10 obscenities (a few “s” words nut mostly “h” words), one Jesus profanity, three light exclamatory profanities such as OMG and MG
Violence:
Lots of intense action violence such as energy blasts, punches and stabbings of monsters and superheroes pick different sides in the final battle, so they fight each other
Sex:
Partially depicted fornication from the shoulders up as a young-looking naked man is on top of a young-looking naked woman (later there is a scene of them getting married by a pagan priest asks for the blessing of “the gods”), and two male homosexual lovers passionately kiss one another
Nudity:
Brief upper male nudity
Alcohol Use:
Brief wine use
Smoking and/or Drug Use and Abuse:
No smoking or drugs; and,
Miscellaneous Immorality:
Betrayal and some deception.

ETERNALS is a Marvel superhero story about a group of 10 powerful, immortal beings sent to Earth to protect humanity 7,000 years ago, but who are faced with a new challenge that could destroy all of humanity, the people they’ve come to love. ETERNALS is a rousing, epic superhero adventure laced with humor and excellent character development, with some moral, redemptive elements, but the movie has some expository moments and static dialogue, a homosexual subplot, some foul language, a brief sex scene, and a false, unacceptable pagan mythology that erases God from Creation and human history.

The movie opens with a written prologue which claims that a giant “Celestial” named Arishem created the heavens and the earth and created light. He also created a race of superbeings called Eternals to help him rule the universe, but a race of monsters called Deviants started to destroy whole planets. So, 7,000 years ago, he sent some Eternals to protect the people of Earth from the Deviants.

Cut to 10 Eternals, led by a female named Ajak, defending some Neolithic people from the Deviants. The Eternals start living among the people of Earth. In Ancient Babylon, they defeat the last of the Deviants. Also, two of the Eternals, Sersi and the powerful Ikaris, fall in love. They eventually get married in 400 A.D. in a pagan ceremony in the Gupta Empire in India.

However, during the destruction of the capitol city of the Aztec Empire in 1521, the Eternals become disturbed by the inhumanity of man to man. Ajak, their leader, orders them not to interfere, however, because that’s their mandate from Arishem. This creates a rift among them, and they split up, including Sersi and Ikaris.

In present-day London, three of the Eternals, including Sersi, must battle a Deviant monster who suddenly appears. Sersi and her long-lost husband, Ikaris, decide they must gather together the other Eternals and battle this new threat. However, an even bigger, apocalyptic threat to humanity appears and pits the Eternals against one another.

In the original Marvel Comics version of the Celestials and the Eternals created in the 1970s, the first universe was depicted as a conscious entity who created two kinds of celestial servants, the Aspirants and the Celestials. However, a war broke out between them, and the Celestials used a bomb to tear apart the first universe and conquer the Aspirants. A multiverse was created by the explosion, then the Celestials created an evolutionary offshoot of humans with fantastic powers called Eternals. The Eternals were charged with looking after the rest of humanity and protecting them from a race of intergalactic monsters called Deviants.

Eventually, however, Marvel created in 2004 a distant god character and divine creator called the “One-Above-All.” This character is the source of all love and good and the power behind the creation of the first universe and the multiverse. He stays aloof from the world and only acts through another cosmic superbeing he created called the “Living Tribunal,” who judges all the universes and beings in the multiverse. However, the One-Above-All is a dual god, similar to the Zoroastrian god. He also manifests himself as the “One-Below-All,” the ultimate personification of hate, chaos and destruction.

In a series of comics starting in 2002, Marvel created a version of the God of the Bible, Yahweh, but Marvel depicts Yahweh as comically denying having anything to do with the Hebrew Scriptures or the New Testament, though he manifests himself as Father, Son and Holy Spirit. Marvel also depicts Yahweh as having a drinking problem and suffering from personality disorder, as well as suffering anger tantrums.

Marvel’s ETERNALS movie simplifies all this by turning the Celestial character, Arishem, into a kind of Supreme Being. It thus, apparently, totally eliminates the need for the One-Above-All, much less the God of the Bible. Eventually, though, Arishem comes across as a less-than-benevolent Supreme Being in the movie, though he orders the Eternals to take care of the humans who populate Earth.

ETERNALS is beautifully photographed and has an epic quality to it. The action, especially in the third act, is often rousing and exciting and leads to a satisfying conclusion. Also, the character development is rather detailed and often dramatically compelling. That said, the story goes back and forth in time and consequently contains a lot of exposition. As a result, some of the dialogue scenes are a bit static, especially because the director shoots some of them in close-up, in a painterly manner. Also, many of the action scenes show the superheroes fighting faceless CGI monsters, which is kind of old hat by now.

The most disappointing aspect of ETERNALS, however, is its false pagan mythology. For the first time in its superhero movies, Marvel has decided to totally eliminate the God of the Bible, including Jesus, from Creation and human history. At least in the comic books, there’s an ultimate Supreme Being who creates the “Celestials.”

In this light, ETERNALS has a major philosophical problem. The movie talks a lot about the love for people that some of the superheroes have. Indeed, it is this love for people, as well as the love the superheroes have for one another, that ultimately saves the day during the movie’s climactic battle in the third act. However, unless you have an ultimate divine source, a Personal and Benevolent Supreme Being, or God, for such love, then the idea of love from one lesser being to another lesser being has no ultimate, transcendent foundation. At the end of the movie, Sersi says she became a better person because of her interaction with the goodness of the human race down through the centuries, but where do the human beings derive this goodness since they are, like the Eternals, created beings? Arishem, the Supreme Being in this movie, is clearly a poor substitute for the God of the Bible.

There are other theological, moral problems in ETERNALS.

For example, one of the 10 superheroes, who acts as the scientist and engineer for the group, identifies himself as homosexual. In the movie, after the atomic bomb is exploded over Hiroshima to end World War II, he become upset with humanity and science and withdraws from the other Eternals. Eventually, he takes a homosexual lover, and they adopt a child. Then, when he leaves his human family to help the Eternals overcome their biggest challenge yet, he gives his male lover a passionate goodbye kiss onscreen.

ETERNALS also contains some overt historical revisionism. For example, the movie blames the Spanish Conquistadores for destroying the capitol city of the Aztecs. However, the movie doesn’t say anything about the oppression, slavery, human sacrifice, and cannibalism the Aztecs did against the surrounding tribes in Mexico. In fact, history records that 80 to 90 percent of Spanish attack against the capitol city was made up of other indigenous tribes. Also, when the movie shows the atomic explosion and aftermath of Hiroshima, the movie doesn’t mention the fact that it was the Japanese who started the Pacific War in World War II. Finally, the movie blames one of the Eternals for creating the Babylonian myth of Gilgamesh and Enkidu. It also says she started the myth of the Greek goddess Athena, based on the character of one of the Eternals, whose name is Thena and who’s played by Angelina Jolie.

In addition to the movie’s promotion of homosexual perversion, ETERNALS also includes a partially depicted fornication scene between Sersi and Ikaris. In the scene, the camera briefly shoots a nude Ikaris on top of a nude Sersi, from the top of his back. ETERNALS also contains some foul language.

If the filmmakers had changed the story to make room for the God of the Bible, or at least a Theistic God, and deleted the sex scene, MOVIEGUIDE® could have given ETERNALS only a Minus One, a caution for older children. As it is, however, ETERNALS doesn’t even deserve an extreme caution. It’s an unacceptable, anti-Christian, pagan science fiction thriller that media-wise viewers will want to avoid.