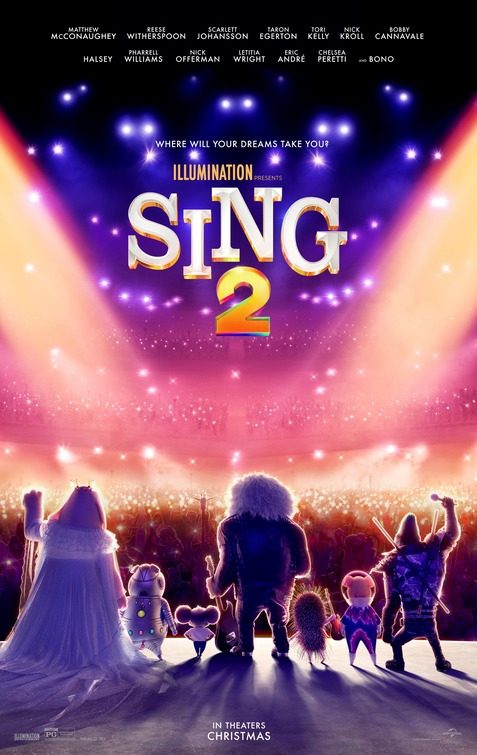 (BBB, CC, V, M):
Dominant Worldview and Other Worldview Content/Elements:
Very strong moral worldview with some Christian, redemptive elements where courage and love win the day over greed, many characters overcome their fear or grief through love for one another and stepping out in faith, kindness is stressed, and characters learn from their mistakes, plus Christian elements include a song about praying for one another
Foul Language:
No obscenities or profanities, some brief name-calling like stupid or idiot and a few “heck” words
Violence:
Some instances of action and peril, the villain threatens to throw one character off the roof, which could frighten younger audiences, and mild cartoon violence includes a paintball gun, crashed car, mentions of Clay Calloway’s wife who died
Alcohol Use:
No alcohol use
Sex:
No sex
Nudity:
No nudity
Smoking and/or Drug Use and Abuse:
No smoking or drugs; and,
Miscellaneous Immorality:
The storyline of one character’s dead wife could upset some viewers, and the villain is intense at times and could scare younger viewers.

SING 2 is an animated musical comedy that follows the events of the story of the first movie, SING. The koala bear named Buster Moon finally has a thriving theater and wants to take his show to the next level, with the cast of the first movie including the colorful and upbeat performances of Meena the Elephant and her friends Rosita, Johnny and Gunter.

Although they sell out another show, Buster’s very anxious because Suki, one of the most well-renowned theater reviewers, is coming. With a positive review from her, Buster and his team could make it to the big leagues and perform in the bustling Redshore city. However, after half the show, Buster notices that Suki is making her way to the exit.

Suki says that Buster’s show is good for local theater but would never sell in Redshore City. Buster, ever-persistent, learns that Suki’s boss, Jimmy Crystal, is holding auditions in search of the next big show, but Suki again talks him down and even says he’s not good enough to succeed.

Buster is distraught. However, after a talk with the stern yet caring Nana Noodleman, he’s reinvigorated to show Jimmy Crystal a great musical play no matter what. Ash, who is performing rock concerts on the side, agrees to help Buster and her friends. After some persuasion from Rosita, the rest of the team joins them on a bus to Redshore City.

Buster is determined to perform for Crystal, but before they can even start singing, Crystal dismisses their act as boring and cliché. However, on their way out, Gunter mentions his idea for a space musical and catches Crystal’s attention with the mention of the famous rock legend Clay Calloway. Buster runs with Gunter’s mention of Calloway. He says Gunter’s space musical will also include Clay Calloway’s first performance in years.

Crystal knows that a show with Calloway will be the biggest show in Redshore City. He agrees to give Buster and the team whatever they need to make Gunter’s ideas come to life on stage. However, there’s only one problem. No one has seen Clay Calloway in 15 years.

Buster sends the faithful Ms. Crawley to find Calloway as he tries to make sense of Gunter’s ideas for the show. Buster is on the verge of putting on the show of a lifetime, but Crystal becomes more threatening when Calloway is nowhere to be seen on set. Moreover, the show’s leads, Rosita, Meena, and Johnny, are all struggling to have confidence in their roles. Buster and the team must rely on one another as they face their fears. Will Buster be able to pull off the show of a lifetime?

SING 2 is a colorful, funny, heartwarming movie that stresses overcoming fear and grief through love, family and courage. Several characters struggle with their own obstacles but face their problems and overcome them with the support of close friends. Writer/Director Garth Jennings deftly uses the movie’s music to convey the emotions of the characters, like all good musicals do. His story is also well-paced and superbly written. Ultimately, love and faith conquer fear. There are also some brief Christian elements, including a song about praying for one another. SING 2 has moments of peril, an intense, scary villain, and some minor objectionable content. So, MOVIEGUIDE® advises caution for younger children.