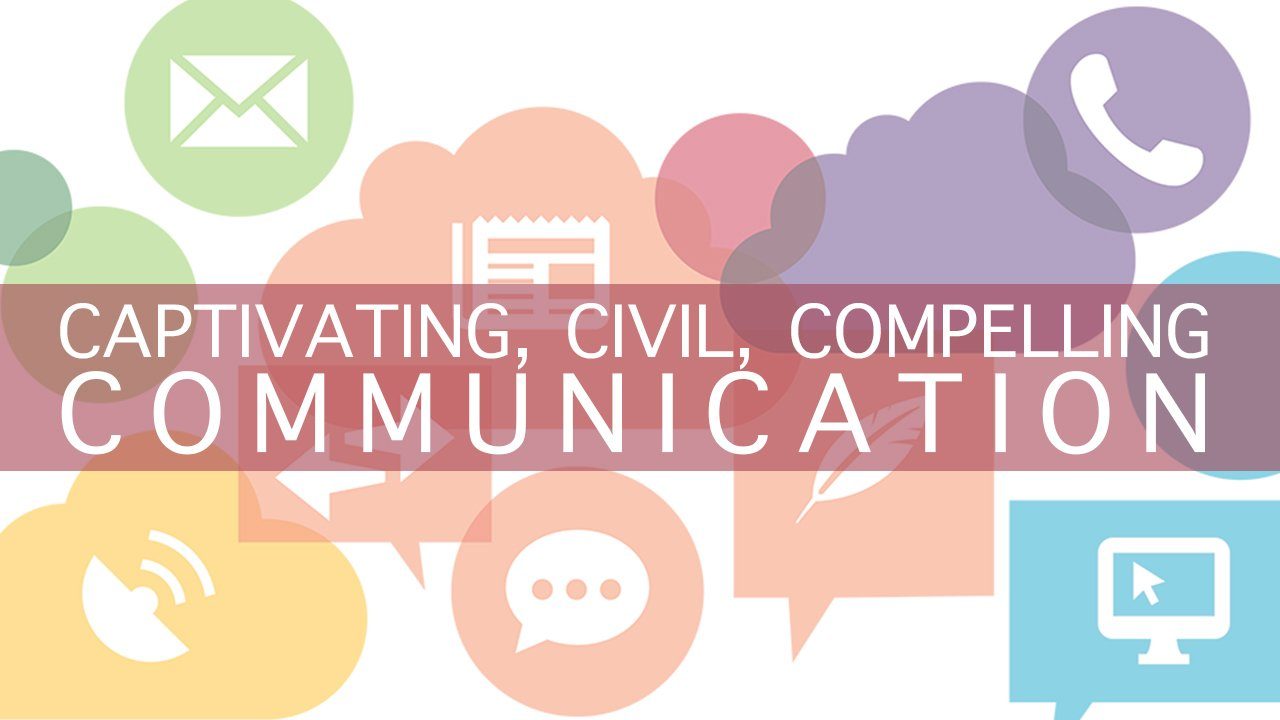 Today we need peaceful, civil discourse, in relationships of mutual respect, even when we disagree, more than ever before. As Christian communicators, we also want to include Biblical communication principles in our communication and when we communicate the scriptures, it is important to deliver them in ways that will captivate our listeners and compel them apply the scriptures to their lives.

The Bible has much to say about wise and fitly spoken and written words. Ecclesiastes 12 says, “…the Preacher also taught the people knowledge; and he pondered, searched out and arranged many proverbs. 10 The Preacher sought to find delightful words and to write words of truth correctly…. Proverbs 25 says, “…A word fitly spoken is like apples of gold in a setting of silver.”

The Bible also tells us to love our enemies.  Luke 6:27 says, “But I say to you who hear, Love your enemies, do good to those who hate you.” Proverbs 25 says, “If your enemy is hungry, give him food to eat; And if he is thirsty, give him water to drink; 22 For you will heap burning coals on his head, And the LORD will reward you. 23The north wind brings forth rain, And a backbiting tongue, an angry countenance.…”

One of the ways to love our enemies is to respect that with which we agree with them. When we build bridges and communication on common ground, we have more of an opportunity to communicate, be heard, and to persuade. Whether it is written or spoken communication, we need to frame it in ways that will be maximally heard.

The Bible also says in I Timothy 3:16 that “…All Scripture is God-breathed and is useful for instruction, for conviction, for correction, and for training in righteousness, 17 so that the man of God may be complete, fully equipped for every good work.…” The scriptures have been inspired by God and are written in many literary forms that include the following and more: history, stories, poetry, wise sayings, prophecy, letters, drama, history…

The Bible is great literature filled with rich literary forms and devices for the ear, as well as for the mind, heart, and soul. The auditory appeal of the scriptures helps the listener experience and appreciate the awe of God and provides mnemonic devices which helps listeners memorize and meditate on the scriptures.

Very few speakers of classical texts, especially the scriptures, deliver literary devices with all their engaging power. However, when scriptures are spoken articulately but naturally with understanding of the context and attention to appropriate words to be emphasized, classical text, especially those of the Bible, can come alive for listeners and remain in the hearts, souls, and minds.

A few basic speaking skills go a long way to captivate the attention of listeners and to compel them to apply what they have heard. These basic skills include speaking in the front of the mouth, using the articulators actively, and using vocal variety that involves rich, wonderful, engaging sounds and auditory patterns that enlighten and enrich understanding of words and texts.

The following skills engage and enable listeners to comprehend what they are hearing on deeper levels. These skills that bring what is spoken alive when it is read aloud include the following: using the mouth, head, and body for excellent delivery; developing vocal variations; speaking with Standard American and Elevated English; skillfully delivering literary devices (especially for Biblical texts) and more.

Primarily, audiences need to be able to understand what they read and hear. Communicators should work towards clarity, precision and definition. Speakers should also strive for these as well as for effective vocal delivery that involves vocal clarity, intelligibility, and good articulation.

Effective articulation involves production of clear vowel and consonant sounds. Clear vowels are produced on open breath, which is unimpeded by articulators and shaped by the oral passage. Incorrectly articulated vowels are often due to not opening the mouth enough. To artfully speak fully open, articulated vowels, think of opening the mouth more vertically than horizontally as you speak. Consonants are produced on breath and shaped by active use of articulators. Properly produced vowels are open, rich sounds. Properly spoken diphthongs and triphthongs, which are compound vowel sounds, are not overly elongated as they often are in Southern American. Properly produced consonants are not overstressed as they often are in the American South.

It is important to articulate each sound in a word correctly and clearly. Each syllable should be spoken effectively so that each word is understandable and pleasant to hear. Some of the following poor speaking habits cause articulation and pronunciation that is difficult to hear or comprehend:

To engage audiences and to keep them captivated, speakers should establish justified vocal patterns that include variations. A pleasing voice has the following characteristics: flexible, relaxed, colorful, strong, liquid, expressive, and varied. Vocal patterns should not stay static but should build in intensity in the rising action of scenes. Vocal patterns establish the following issues: setting, style, emotion, mood, and scenic development. Effective vocal delivery provides room for appropriate pauses, silences, or holds for laughs.

It is critical to use correct, standard grammar that is accepted by educated people. Good writers and speakers should study language rules. There are three important, basic elements of good writing and speaking: ethos-credibility, logos-logic, and pathos- emotion. Nothing can hurt credibility more than using incorrect grammar.

It is important for credibility and engaging speech to pronounce words correctly. Various guides in standard dictionaries for correct pronunciations of words include: diacritics (marks that clarify sounds), transliterations (words spelled like they sound), and/or listening to standard audio dictionary pronunciations.  Using correct grammar and pronunciation facilitates speakers’ credibility, influence, and persuasion.

It is best to use standard English speech for media for universal understanding around the world. Standard American, English speech is free of regionalisms, colloquialisms, and slang. It is also referred to as neutral, non-regional, General American, or Broadcast Standard speech. It is marked by standard, educated and acceptable pronunciation.

The Elevated American English Dialect falls between a Standard American Dialect and Standard British English Dialect. It has softer r’s and rounder a’s. It has a heightened, educated, formal sound and is focused toward the front of the face and mouth. To produce softer r’s, keep the tip of the tongue resting lightly against the back of the lower teeth and keep the back of the tongue relaxed. To speak rounded vowels, especially a’s, keep the inside of the mouth open (think more vertically than horizontally open) and avoid bright-sounding vowels that are produced when the inside of the mouth is too closed.

As skillful speakers deliver classical texts in Elevated American Speech, they bring interest to the sounds of the words, as well as to the ideas and thoughts. They know how to perform vowels, consonants, syllables, and phrases artistically and intelligently. They are able first to identify literary devices and to heighten them in their appeal to their listeners’ ears. Such literary devices include the following:

Rhetorical devices can be artfully spoken to provide examples, emphasis, interconnections, and clarity to spoken texts. In using and speaking rhetorical (effective speech) devices, determine where the key points and stresses should be in a passage. Key words identified with rhetorical devices should be spoken with a little extra energy to enable listeners to apprehend what is being said and emphasized. Common rhetorical devices include the following:

In reading or speaking poetry, especially of the Bible, it is important to emphasize the thoughts and the sounds. Do not stress the meter and rhyme. Perform the meter in an understated style so that it undergirds the ideas and sounds like heart beats. Observe punctuation, especially ending punctuation. Do not automatically stress ending syllables, as some endings are feminine and continue to the next lines and some are masculine with completed thoughts that are stressed at the end. Perform poetic devices appropriately. Observe ideas, sounds and emotion, heightening them in a natural way. Deliver poetic imagery with wonder. Give human emotion and will to personification of objects.

Our Lord used parables to capture, captivate, and compel listeners. The word “parable” is from a Greek word meaning “to compare together.” Our Lord compared natural objects familiar to His listeners to teach.  He taught Truth in appealing and captivating ways that appeal to minds and hearts by referring to captivating visual images. He also appealed to the senses of His listeners.

Jesus’ stories and those of other Biblical storytellers, such as the Prophet Nathan and King David, engaged, sustained and maintained the attention of listeners, as well as motivating them to take appropriate, significant action.

Effective stories have emotional appeal to hearts, consciences and morals. Effective storytellers appeal to the senses and imaginations of audiences. Good storytelling builds in intensity to the critical turning point of the story and ends with a strong point that will have a lasting, important impact and will motivate significant change for eternal good.

It is important to observe effective communicators. Speaking models can be found on educational sources: public television, public radio, videotapes, audio resources, and national news via television, radio, and the Internet. Those who are looking for good media speech models should be careful with speakers who use local and regional speech, rather than Standard English that has wider, universal appeal.

Clearly hearing and understanding God’s perspective from His Word and being captivated by it is critical for readers and listeners to find God’s plan for their eternal lives. Throughout the Bible we are admonished to speak the Word and are given examples of skilled and persuasive speakers. Here are a couple of examples. Romans 10: …14 “How then can they call on the One they have not believed in? And how can they believe in the One of whom they have not heard? And how can they hear without someone to preach? …” Acts 17: 2 “As was his custom, Paul … reasoned with them from the Scriptures, 3 explaining and proving that the Messiah had to suffer and rise from the dead. ‘This Jesus I am proclaiming to you is the Messiah,’ he said. 4 Some of the Jews were persuaded and joined Paul and Silas, as did a large number of God-fearing Greeks and quite a few prominent women…

It is up to Christian writers and speakers, especially as they use Biblical texts, to wisely use arts of skillful persuasion to maximally captivate and compel readers and listeners.

Editor’s Note:  Dr. Diane Howard is a media speaking coach on-site, via Skype and over the phone. She can accomplish much with clients in as little as half an hour. She is the author of the following and more: Speak Skillfully and Successfully: A Guide to Developing Diction and Voice-Over Excellence (Amazon, McGraw-Hill, 2005) and Speak Clearly and Creatively On Film, Television, Radio, E-Media, & Platform (Amazon, 2017) . See dianehoward.com .