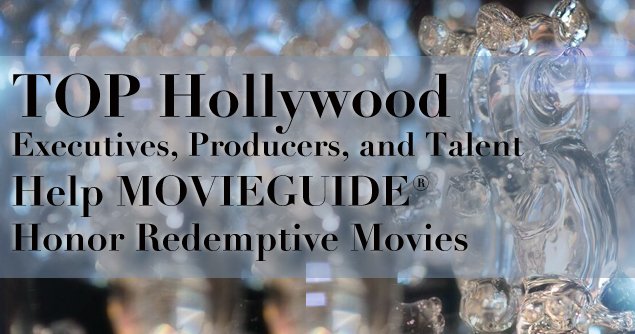 A packed house of Hollywood stars and celebrities joined with top Hollywood executives, producers, filmmakers, and television artists to celebrate the most inspiring, family-friendly movies and television programs of 2015 at the 24th Annual MOVIEGUIDE® Faith & Values Awards Gala and Report to the Entertainment Industry Feb. 5.

The event was held in the sparkling Grand Ballroom of the Universal Hilton Hotel near the heart of Hollywood.

Many of the entertainment industry’s top movers and shakers and celebrities, along with friends and supporters of the Gala and MOVIEGUIDE®, came to find out the winners of the Best 2015 Movies for Families and Mature Audiences, the Grace Awards for Most Inspiring Movie and TV Performances of 2015, the Bradley Foundation Faith & Freedom Award for Promoting Positive American Values in Movies, the $50,000 Kairos Prizes for Spiritually Uplifting Screenplays by Beginning Screenwriters, the $50,000 Chronos Prize for Inspiring Screenplays by Established Filmmakers, and the prestigious $200,000 Epiphany Prizes for Most Inspiring Movie and TV Program of 2015.

More than 485 people attended the event.

MOVIEGUIDE® is the host of the Gala and Annual Report, but we couldn’t have done it with help from many sources.

Celebrity attendees and honorees gathered on the Red Carpet before the Awards, which included a Gala banquet honoring the men and women who make the most family friendly, redemptive movies and television programs.

The emcee for the Gala was Joe Mantegna, the star of CBS-TV’s popular program CRIMINAL MINDS and movies like CARS 2 and SEARCHING FOR BOBBY FISCHER.

The co-host for the evening was Sadie Robertson, star of A&E’s hit program DUCK DYNASTY.

The evening’s two musical highlights were performances by Country & Western star Trace Adkins of his new hit song “Jesus and Jones” and by singer Andra Day of her inspirational hit “Rise Up.”

Giving the invocation prayer was Producer DeVon Franklin of HEAVEN IS FOR REAL and MIRACLES FROM HEAVEN. Producer Stephen Kendrick of WAR ROOM and COURAGEOUS gave the benediction prayer.

Producing the Gala this year, including the TV program for the REELZChannel, was Larry Thompson of the Larry A. Thompson organization of Beverly Hills and Michael Trent of Firefly Creative.

All of the Gala honorees and attendees were given a surprise packet after the ceremony. Included in the packet were:

The Annual Issue of MOVIEGUIDE® featuring the 2015 DVD Guide as well as the Best and Worst Movies of 2015, MOVIEGUIDE®’s 2016 Annual Report to the Entertainment Industry, and a Holman Christian Standard Note-taking Bible from Holman Publishers.

MOVIEGUIDE® Founder and Publisher Dr. Ted Baehr presented highlights from Movieguide®’s 2016 Report to the Entertainment Industry, a comprehensive economic analysis of the content and philosophical, moral, spiritual, and political perspectives in the major movies released theatrically in 2015.

“You’re the heroes,” Dr. Baehr told the nominees and award winners. “You made movies with home and heart, which is our theme this year. I’m praying you’re going to go forth from here to make more of them so that your children and grandchildren will have the heart to seek that very special real home that they have intended for them to give them a more abundant life.

“Every year, movies with faith and values do better at the box office,” he added. “Thanks to you, redemptive content continues to increase every year.”

Dr. Baehr reported that 80% to 90% of the Top 10 Movies in the United States and overseas in 2015 contained strong or very strong Christian, redemptive, biblical, moral content, and/or conservative values or worldviews, including such movies as FURIOUS 7, THE MARTIAN, CINDERELLA, JURASSIC WORLD, INSIDE OUT, THE HUNGER GAMES:  MOCKINGJAY – PART 2, MISSION: IMPOSSIBLE:  ROGUE NATION, THE AVENGERS:  AGE OF ULTRON, and even STAR WARS:  THE FORCE AWAKENS.

Even better, 90% of the Top 10 Home Video Sales in 2015 thru Dec. 20, 2015 had strong or very strong Christian, redemptive, biblical, moral content, and/or conservative values or worldviews, which also included such positive movies from 2014 and 2015 as BIG HERO 6, HOME, AMERICAN SNIPER, THE HOBBIT:  THE BATTLE OF THE FIVE ARMIES, and THE HUNGER GAMES:  MOCKINGJAY – PART 1.

“You did this,” Dr. Baehr said. “You made a difference. We’re here to help you succeed. That’s what we do.”

Here are charts of some of the major findings in the Annual Report:

The Stronger the Christian Worldview, the Better It Did

Movies with No Foul Language Earn the Most!

Movies with No Sex Earn the Most!

Movies with No Nudity Do Best!