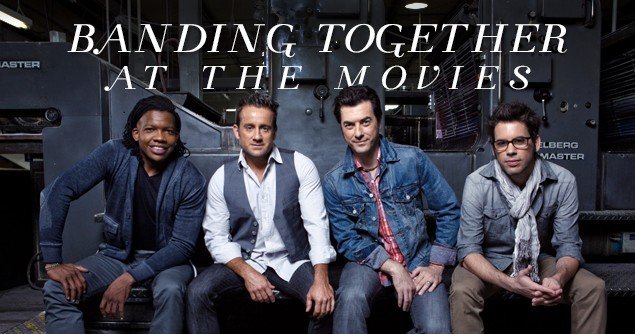 BANDING TOGETHER AT THE MOVIES:

Jeff Frankenstein of Newsboys on GOD’S NOT DEAD

Movieguide® had the opportunity to talk to Jeff Frankenstein, the keyboardist for the Newsboys band, on the role the band had in the new movie GOD’S NOT DEAD.

Originally, “God’s Not Dead” was a Newsboys song, so the filmmakers, who had similar themes in their script, called the Newsboys about working together on the movie. Happily, they paired up. The movie was released this Friday, March 21!

Make sure to check out MOVIEGUIDE®’s review.

Here’s what Jeff had to say:

MG:  How did you get approached for the movie?

Jeff:  The song and the concept of the movie came up at the same time. It’s crazy because the song has been out for maybe two and a half or three [years]. It has a life of its own. The song had come out, and it’s obviously doing well for us. The people from Pure Flix came and had an idea for a movie that they had actually been writing and working on for years. It just seemed like a great fit for the whole band and the whole concept of the movie, and it all started to go into production. The movie has been in the making for at least two years, maybe two and a half. I have realized that making movies is a lot harder then making albums; that’s for sure. There is so much more money involved, people involved. The organization it takes to get a movie out, it blows my mind. [It] seems very difficult. It’s a pretty amazing thing to watch it all come to fruition this week.

MG:  This is your first movie to come on board with, right?

Jeff: We did a movie back in the 90s called DOWN UNDER THE BIGTOP, you might remember that. It never got past the VHS stage.

MG: How do you feel like the movie and the song best speaks to the “millennial” generation?

Jeff:  We live in a different sort of time then 20 years ago. I joined the band in 94, and I’ve been touring ever since. I obviously get to meet people in the “real” world or whatever. I feel like as a society we are [changing]. Forty years ago, people didn’t really question the existence of God. The arguments were like “we believe in a God, but what is He like?” It was more about theological issues. Now, we have progressed to this point where the debate is “Does God even exist or not?” Which seems to me like a backwards sort of leaning, even though people think we are so advanced. It is a weird argument for me because. . . God has been such a big part of my life that those questions don’t really even ever pop my mind. A lot of it is that we have become our own gods. Everything has become so self-centered in every part of media. Whether it’s celebrities or the Internet, a list of things, and we have kind of become our own gods. Because of that, a lot of people are [saying], “Well, do I even need a sort of higher power?” One thing I am hoping for this film is that, [at] the very least, it will make people start to ask questions.

MG:  The movie also shows how to defend your Christian faith.

Jeff:  Yeah, just when you think apologetics is going out of style, it is more relevant then ever now. If you’re in social situations, at a party, nothing will make someone more uncomfortable then talking about Jesus. That’s proof in itself that there has got to be something to it. If you didn’t believe in it, why would it even matter to you? The question of Jesus is a big one for people. It’s a game changer. If He didn’t realize exist, then why would it make people that didn’t care about Him so uncomfortable?

Jeff:  It looks like a lot of the Christian film industry has gotten a lot better than what it was when it first came out. [There are] parallels between that industry and the music industry. They have dealt with the same issues, which is very, very, very low budget and having to make something out of nothing. The great thing that has happened in the last few years is that technology has allowed the playing field to be leveled. Everyone has access to the same tools now. You will see it will continue to get better and better. GODS NOT DEAD looks great, and the more that people come out to the theaters and support it, the better [the industry] will get. The good thing is we are seeing so many more movies with Christian themes. That shows that people are interested in those topics and issues and that is really encouraging to me. It proves that people are really thinking about it.

MG:  With the movie and your role, how much were you involved?

Jeff:  We toured so much we had to actually shoot our scene at a show. That show happened that night in Houston, and we shot the scene at the venue during the day in an actual dressing room of the show. From our point of view, it felt pretty natural (via mccullough here). I realized that acting was way harder than music because you just don’t know if you are doing a good job or not. In a show, people clap. There’s your instant feedback. When you are acting, you are repeating [many] words at a time. I felt so bad for the actress that was in our scene because she had to cry over and over and over as we messed up our scene over and over.

MG:  You probably have those same things happen to you in real life, when people tell you their lives have been reached through your music?

Jeff:  Definitely. There was one this year that Jody and I went to the hospital and visited a kid. He had been in the hospital, little kid, seven, had been in the hospital five years with leukemia. He was just battling and battling, basically lived in the hospital his whole life. He loved Newsboys. We went down there to visit him. He was really into Christian music. Loved “God’s Not Dead.” Loved the band. He couldn’t come to the show, obviously. What an inspiration, in a hospital bed, couldn’t even stand up, and he sat there and sang us “God’s Not Dead,” performed it for us. Just a couple weeks ago, he was feeling better, was out of the hospital, came to our show in person, and got to see us for the first time live. That’s when you realize what music and these films, what they mean to families. Now that I have kids of my own, I totally get how these films and this music, what it means to people. Especially in this day and age when entertainment, [when] the messages [are] sent to our kids [and] their innocent little minds – at four years old having to worry about what they look like, or whatever. It is really giving me a renewed sense of purpose of why we do what we do.