"Faith Under Fire on Campus" 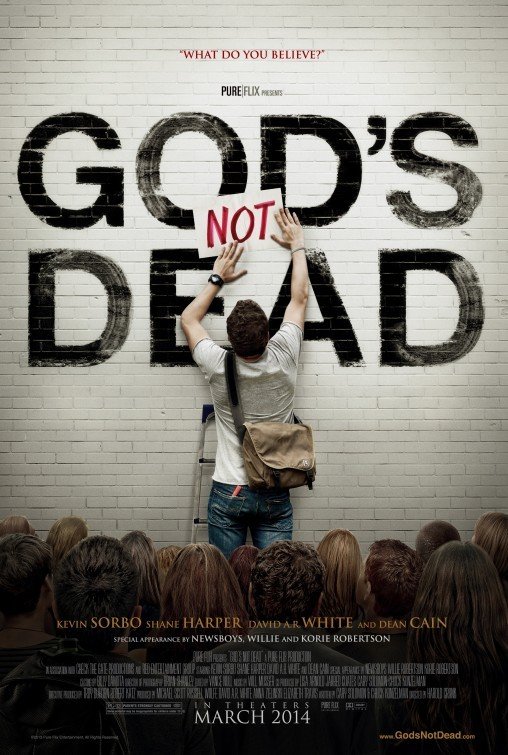 (CCC, BB, V, A, M) Very strong Christian, evangelistic worldview with strong moral points; no foul language; Muslim father hits his Christian daughter and throws her around the room, college professor gets hit by a car that ruins a red light on a rainy night and dies, professor threatens student and manhandles him; no sexual immorality, but some kissing and hugging; no nudity; references to wine alcohol; no smoking or drug references; and, college professor bullies students, man uses girlfriend, Muslim father dominates daughter, boy violates trust, professor ridicules live-in girlfriend in front of other professors.

GOD’S NOT DEAD is an entertaining, profound, powerful Christian movie about a college student who has to stand up for his faith when bullied by an atheist professor.

Josh Wheaton arrives on campus with his potential fiancée, Karen, and signs up for the best schedule. He’s told not to sign up for one philosophy class, because the professor will crush your Christian faith. He does sign up, because Professor Radisson’s class fits his schedule.

Professor Radisson forces each student to sign a pledge that God is dead at the beginning of his philosophy class. Josh refuses, and Radisson tells him he’s going to fail him and break him. Radisson gives him a few minutes in each of the next three classes to get the students to change their minds that God is dead, or to destroy his chances of getting a grade that will get him into law school. Josh’s fiancée, Karen, gets angry at him and tells him to just sign the form that God is dead.

Meanwhile, a beautiful Muslim lady in the school has secretly come to Christ. Her father violently kicks her out of her home. Also, the local pastor, Dave, is running on fumes when a Nigerian friend comes and challenges him to live his faith. A reporter, named Amy, a radical vegan, does ambush interviews with Willie Robertson and his wife. Her dreams are dashed when Amy finds out she has cancer and her wealthy, successful boyfriend, Mark, dumps her and admits he’s just been using her. Mark’s sister happens to be Professor Radisson’s live-in girlfriend, Mena, who takes care of their mother who’s got dementia. Radisson knows Mena is a Christian, but he’s trying to make the relationship work, only if she doesn’t talk to him about her faith.

Can Josh convince the class that God is not dead? Can Mena get out of the bullying control of Professor Radisson? Can the Muslim convert survive jihad? Will Reverend Dave reclaim his faith?

Although there are a lot of stories in God’s not dead, like CRASH they work because they all end up in the same place. The direction and acting are excellent most of the way through the movie. Kevin Sorbo and Shane Harper are particularly entertaining in their intense confrontations as Dr. Radisson and Josh. The movie also features three wonderful songs by the Christian band Newsboys. Finally, the ending is terrific.

GOD’S NOT DEAD is a powerful apologetic and evangelistic movie. It has some of the most erudite dialogue ever in a movie. The dialogue refers to everybody from Stephen Hawkins to Descartes, to a slew of other philosophers and scientists. The bottom line is that these are the problems Christians face on most college campuses today. As the credits roll, there are hundreds of cases fighting for the rights of Christian students and professors on campus. In other words, this is a movie with a message.

Even so, the entertainment value of GOD’S NOT DEAD transcends the message. You will not be bored, and you will be enlightened and inspired. GOD’S NOT DEAD is highly recommended.