On the Set of DOONBY with Actress Jenn Gotzon 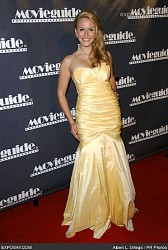 Editor’s Note: Jenn Gotzon, actress and friend of Movieguide®, is working the usual 12 hour shifts of a typical actress on location with the new movie DOONBY. Jenn sent us a short note with a glimpse of life on the set and behind the scenes of this new movie.

Since I’ve very limited email access and have been extremely behind on all the wonderful emails and Facebook notes, I thought I send an update about my time on DOONBY (.com)

I’ve been having the time of my life playing the female lead who experiences all sorts of adventure, from alcoholism addiction to remorse from sinful acts to jealousy to extreme emotional distraught to the joys of exploring new love and the hope of life’s purpose. It is a role of a lifetime.

Above is picture of John Schneider (who is playing the film’s hero and my character’s love interest Sam Doonby) and me from today during our 13th day of production (I believe it is a 32 day shoot). Other pix taken daily from my phone and uploaded are on my Facebook profile (www.facebook.com/jenngotzon). John has been really amazing to work with. He is such a talented professional that I am blown away every day by what he does creatively and technically. It has been a real blessing to work with him. He creates so many surprises during our scenes that my reactions are sooooo authentic, and I’m always surprised by what he comes up with next, which makes it so much fun to work off opposite of and go on the adventure together. I’ve been learning so much from him.

Today, we shot a scene with Robert Davi and it was great working off of them during their confrontation in the story. We just finished our scenes with the Reaper family including Jennifer O’Neill (who plays my mother, Barbara Ann Reaper) and Joe Estevez (who plays my dad, Cyrus Reaper). It fascinated me working with them how we all created this electrifying dynamic between us all causing a tug-of-war family dysfunction.

Filming has been really wonderful. My husband, Chris, left Saturday, and I miss him so much already. I was so blessed to have him with me for the time he was here. He got to work two days on the film in the camera department. Everyone in the camera dept misses him, too. During my one day off each week, Chris and I visited Austin and had the best time eating the best sushi at Uchi Sushi, seeing bats, experiencing a movie theater called Alamo Draft House where they feed you like you are at a gourmet restaurant, and learned about the history of Texas at a museum. It was such a great time together.

My agent David Brown visited me especially on my birthday and spearheaded a HUGE birthday celebration hosted by the production. This included tons of food, local singers and fun music in Smithville at a local community park by their Guinness Book of World Records Ginger Bread Man. It was so special, and I kept pinching myself to see if it was real.

Last Sat, I shot the scary scene in the film and with my hubby and agent’s suggestions and help, I was able to cry for ten hours straight and not carry with me the trauma of that scene. My character was being stalked, and our film’s hero Sam Doonby saves me from the attack.

The director Peter Mackenzie is British, and so is his Director of Photography, Peter Field (who has been 2nd unit Director of Photography on the James Bond movies).They are the greatest to work with and are so much added fun because of the cultural difference in language terminology. The other day John said, “Oh how cute is your nephew, he’s a little bugger” and Peter yelled CUT. In England, ‘bugger’ means a very bad word. LOL. Peter has allowed me to explore all aspects of the emotional range of my character and directs me in a clear way that I get to truly paint the picture he envisions.

It is so fun working with him and the entire production team. It brings me great joy seeing Peter Mackenzie who wrote DOONBY bring his story to life and capture the moments on camera. He is a joy to work with and has so much talent.

Mark Joseph who is co-producer was the one responsible for me being cast as the female lead, Laura Reaper. We were Facebook friends, and he contacted me about the role after seeing my reel. I feel so blessed and appreciative of him. He visited the set this weekend with his nine-year-old daughter. We had so much fun together. He saw me prepare emotionally for nearly ten hours of crying in hysterics on cue. What fun. 🙂

The Auberge LaGrange Bed and Breakfast I’m staying at in Smithville is managed by the BEST people in the world, Lauren and Mark. They make the best food and have the biggest hearts for hospitality. They have taken me under their wing and I feel so loved. It has been such a delight staying with them. The first week in Texas, I had an unexpected pressure spike in my right eye (from a recent vision correction eye surgery) causing my vision to go black and extremely blurry. They prayed for me. Lauren cooked a special chicken soup for me, picked Chris up at the airport as he flew down because of this emergency, and cared for me. They then gave Chris and I their car to use to have date nights. Great people.(THANK YOU for praying for me. I know many of you heard of what happened with my eye. I am continuing to feel the prayers for healing. Thank you — that was frightening to not be able to see out of my right eye).

My parents drove four days from Pennsylvania to surprise me. It was their first time ever on a professional film set. Everyone from the DOONBY cast and crew shared insight about their particular position and the importance of their job in the making of the film. My mom and dad had the time of their life. They were only able to stay for a few days before they began their trip back home. Those days will last in our family’s hearts forever.

I’ve had the best time playing Laura Reaper and am so appreciative to the producer Mike Mackenzie for how much they have gone above and beyond to ensure all of us have been taken care of. The film has a deeply profound message that s going to resonate deeply with the Movieguide® audience – trust me. I can’t wait for you all to see it.