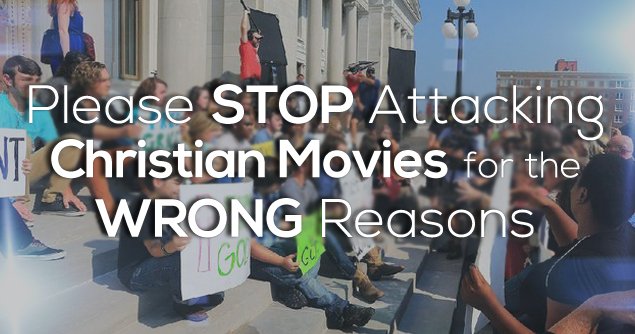 If you follow various news-sites or bloggers, you might have seen a swarm of attacks on Pureflix’s recent sequel GOD’S NOT DEAD 2. Most of which claim the movie proselytizes, or “preaches to the choir,” or is just “bad art.” Now that the movie has grossed $7.6 million at the box office on its opening weekend (a little over $1 million less than the previous movie), all of a sudden, many are being told that the movie is a dud, or a failure.

This of course couldn’t be further from the truth. Not only is $7.6 million a very respectable haul for a small budget movie, but the larger story is that GOD’S NOT DEAD 2 and the recent faith drama MIRACLES FROM HEAVEN were both among the top 5 movies at the box office this weekend. This is a new milestone for faith based entertainment!

However, what about those arguments that GOD’S NOT DEAD 2, WAR ROOM or SOUL SURFER are “bad movies” because of their overt messages and “pandering”? A few vocal Christian bloggers and reviewers have so vehemently criticized faith-based movies that one might be led to believe the very existence of quality filmmaking is at stake. Admittedly, I understand and appreciate much of their concern. We want movies that reflect the artistry of our Creator. Movieguide® reviews a lot of these faith-based movies that lack entertainment value and quality. Sadly, the good ones are far and few between.

What many critics have done, however, is that they’ve traded criticism of craft with a criticism of genre, and they’ve done so by creating barely defendable presuppositions about the very purpose of movies altogether. In the eyes of those critics, GOD’S NOT DEAD 2 isn’t a “bad” movie because of bad acting, bad cinematography, or even bad writing, it’s bad because in their eyes, a movie that preaches and teaches by definition can’t be a good movie.

One could write a whole book about the subjectivity/objectivity of art, and many have. What I’d like to do is challenge readers to reconsider the definitions that have been given by secular movie critics.

If those critics are to be consistent with their presuppositions, they can’t criticize GOD’S NOT DEAD 2 for having a message, or for being one sided. They can disagree with the message, or have issues with the side it takes, but to complain that a movie or story takes a side would mean that movies should always be amoral or neutral. If this was even possible, imagine if SELMA or SCHINDLER’S LIST didn’t take sides and the filmmakers chose not to make any statements about how life should be in those real life situations. They would be bad movies, not just artistically, but morally.

Let’s stop attacking movies for saying something, and instead have a discussion over what’s being said.

Are teachers really being fired for mentioning a historical figure known as Jesus? Are pastors being forced to pass their sermons by the government for review to make sure they’re politically correct? Yes, these things are happening, and if they were happening to Muslim Americans, Hollywood would notice and the rest of liberal America would too. The truth is, many movie critics will treat a movie harshly just because they don’t like what it says, and that’s actually ok. It’s time to stop pretending that anyone can look at a movie having put aside their entire worldview and decades of thoughts and opinions engrained into their subconscious. The conversation has to change from “Can movies say something” to “Are the things the movie is saying important?”

Additionally, many movies are accused of “preaching to the choir.” As Producer Stephen Kendrick of WAR ROOM and FIREPROOF stated last year at the National Religious Broadcasters convention, sometimes the choir needs and wants preaching. Filmmakers like the Kendrick Brothers, Mark Burnett, Roma Downey, and studios like Affirm Films and Pure Flix know their target audience, and if they connect with that audience in a entertaining fashion, then bravo to them, that’s show business. That said, connecting with the audience only goes so far if the filmmaker can’t make their money back. If a $20 million dollar movie only brings back $10 million, something’s terribly wrong. Look at it this way:

A filmmaker is like an archer and the end goal is the target (the audience). If the craft is how you hold the bow, where you aim the arrow, how you compensate for wind and your surroundings, in the end, the goal isn’t to hold the bow in a neat way, the goal is always to hit the target consistently. Let’s take this analogy deeper and say that the size of your arrow is the size of the movie’s budget, and the size of the animal that’s being hunted is the size of the target audience the filmmakers are able to connect with their movie. No matter how good the filmmaker or the archer is at connecting with the target, if the arrow isn’t powerful enough to stop the bear (or the $20 million movie isn’t marketable enough to earn its money back), then the archer is going to get attacked. It’s not the prettiest of analogies, but it’s actually very helpful for us to decide if a filmmaker connects with the audience in a successful manner. No matter how great a movie may seem, if the marketing fails to deliver a beginning audience and the story doesn’t create word of mouth to allow for financial success, then the movie is a dud. Pure Flix and the Kendrick Brothers have a very successful business model in that they create small budget movies with entertainment value and messages that spur word of mouth. They’re hitting the targets consistently over and over. However, when it comes to the faith-based genre, too many critics aren’t looking at the bow or the target, they’re looking at the arrow traveling through the air and they’re saying “good arrows don’t move like that.” Such comments are silly, unhelpful and, if we’re honest, come off as pretentious.

When it comes down to it, faith-based movies aren’t everyone’s cup of tea, and that’s fine. However, the online bullying and hypocritical snobbery that some Christians are taking part in to appease a sense of greater artistry is creating unnecessary strife and judgmental mindsets. I know this, because I used to be a part of it. That is, until I met an 8-year-old boy in Nebraska, who’s life was completely changed when he watched GOD’S NOT DEAD in theaters with his dad. He gave his life to Christ, was baptized, and started writing screenplays so he could become a filmmaker, with a dream of one day working for Pure Flix. I wasn’t a fan of GOD’S NOT DEAD personally, and even though that young boy’s passion for God and moviemaking didn’t reverse my opinion, it changed my attitude, and gave me a greater desire to discuss these movies in a way that doesn’t belittle or divide, but builds up and encourages.

Since then, I’ve found some immense spiritual satisfaction and cinematic enjoyment watching faith-based movies. If you’re a Christian, and you hate Christian movies, maybe it’s time to accept that many people do love them, and have laughed, cried and had emotional experiences because of them. Ultimately, regardless of how you feel about the message and the way the message is being delivered, those movies may actually be good movies because of all that.

Editors Note:  If you’ve been impacted by a faith-based movie, or a Hollywood movie with Christian themes or messages, please tell us more about it in the comment section.