Robocop – Tinkering with Man and Machines 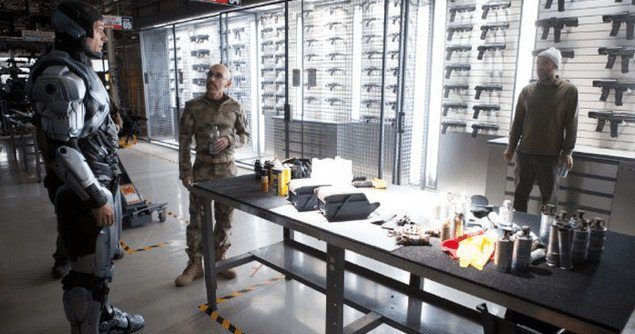 Tinkering with Man and Machines:

Behind the Scenes of the New ROBOCOP Movie

In 1987, controversial director Paul Verhoeven unleashed an original action/satire called ROBOCOP into theatres. The movie was packed with lurid action and profanity, but had some interesting questions lurking beneath its R-rated surface. What would happen if society eventually had a policeman who was half-man, half-robot? Also, what would the ethical implications of that be, for the man himself and for society as a whole?

That first ROBOCOP made $70 million (about $150 million in today’s prices) and became a perennial cult hit on cable and DVD, spawning two inferior sequels as well.

Since a quarter-century has passed, Sony Pictures decided to reboot the movie and give it a 21st Century spin. The irony is that the present reality – both in terms of the year and the technological advances – has almost caught up to the first movie.

In a refreshing change from most movie reboots, where the new movies are dumber than the originals, the new ROBOCOP is actually better and much smarter than its predecessor. It tells the story of Alex Murphy, a Detroit cop and family man who’s almost killed by an explosion caused by an enemy criminal and then finds his brain, heart, lungs, and face encased in the body of a robot that’s intended to serve as a gateway for other robots to take over all police functions, the 2014 ROBOCOP raises some timely questions as well.

The new ROBOCOP offers plenty for viewers to contemplate and talk about afterwards. It deals with the issues of how far robots and clones should go in securing society, questions regarding free will, how far medical technology should be used to preserve a person’s life, and whether it’s the physical or mental and spiritual attributes that make a human being. Thankfully, it’s also a rousing action movie.

ROBOCOP has a terrific cast with Joel Kinnaman of AMC’s THE KILLING as the Robocop, and Michael Keaton, Gary Oldman, and Abbie Cornish in support in addition to sterling direction by Jose Padhila and script by Joshua Zetumer. Those four actors and Padhila teamed up recently for a press day in which they answered some burning questions about the new ROBOCOP. 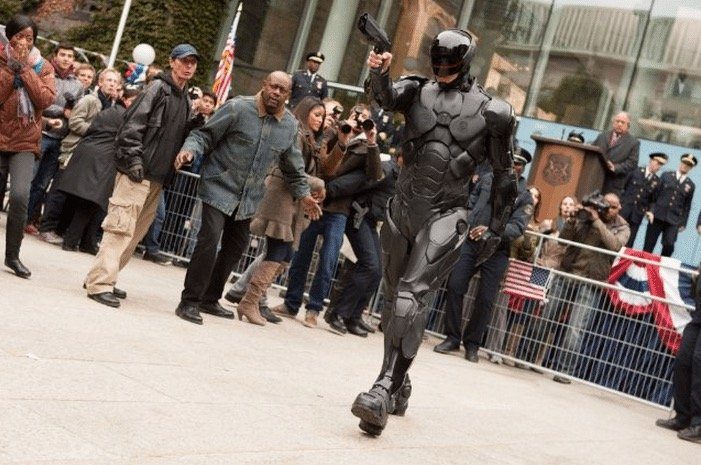 Q:  This movie dealt with issues aside from security, such as issues of medical technology, how long should people be kept alive, and free will. What was the thought process in doing that?

Padhila:  First, Verhoeven’s movie already had a great idea in place, which is the connection between the automation of violence and fascism. You can think about this connection several ways. One way to think about it is consider Vietnam. America pulled out of Vietnam because there were movements at home to stop the war because soldiers were dying. If you take away the soldiers and put robots in, and the same thing goes for Iraq and law enforcement – if you replace a soldier with a machine, you take away the possibility of a policeman or soldier to not do something they ask of him. A machine doesn’t have an ethical perspective.

If you think about the first movie, you had Alex Murphy fighting against the directives in his head. So that character relies on the idea that you have to dehumanize the perpetrator in order to have fascism. We are getting very close to having robots replacing soldiers. We’re already seeing drones flying around, and we wanted to make this current. Now in order to make the movie in the present and talk about what’s happening, every country is soon going to have to decide if they want robots for law enforcement or not. The UN is going to have to pass legislation about what’s going to be allowed anymore.

By coincidence, the [British newspaper] Telegraph had a story today about the Pentagon deciding whether to replace soldiers with robots. It’s going to happen. We set up this movie with a place and time where America decided not to allow robots for law enforcement, and this corporation has to create a way to circumvent the law and that’s by making the robot with a man’s conscience. You create a character that’s a little bit different. You need to have a man help sell this machine. So Alex Murphy wakes up totally conscious, with his memories, he’s a man, but he finds out he’s also a robot. Once you do that, you can start to talk about philosophical issues like what defines you as a man? Is it your brain, your body, or is it the software that makes you a man? If you develop this movie in a coherent way, you necessarily have to tackle these issues. The political issues that have to do with the use of drones are very close to the philosophical issues of what is a man versus robot in enforcing law?

Keaton:  Thanks for that long answer. I just figured out what the movie is about!

Q:  We are able to control flying drones from Playstation type systems in countries thousands of miles away, as opposed to someone flying an airplane who is thousands of feet away releasing a bomb.

Padhila:  The difference is this:  If you have a guy piloting a plane and by mistake he throws a bomb in Pakistan and kills a kid by mistake, you can in principle judge the person if they made a mistake or not and put them in jail if needed. If you have an autonomous program run by software and it’s deciding by itself whether to release the bomb or not, liability becomes a mess. Who is responsible? The guy who built the robot, gave it commands, or someone else? It’s an issue that is debated in philosophy. The law has to change to deal with society.

Q:  Every role requires challenges. What did ROBOCOP present to you in terms of dealing with law enforcement?

Kinnaman:  It was a bit of a challenge to put it on the first time. It took 1 hour and 45 minutes and was so uncomfortable, digging in everywhere and under the hot sun in Pasadena. Pressing down on my shoulders, sweating like a pig and after 20 minutes I had to take it off and have a break. Yet I had signed on to do it 14 hours a day for five months. Actually, the suit became one of the first seeds that he went through after he became Robocop. It’s interesting because after he becomes Robocop he feels so powerful yet very uncomfortable. He doesn’t know who he is anymore from his throat down. My little level of uncomfortability made me think of how vulnerable he was.

Many of the most demanding scenes emotionally – when I wake up and the doctor reveals what’s left of me – go back to the moments in your life where you had the greatest pain or anxiety. Your body is involved with that, very expressive internally. The body is a great tool to use – you clench your stomach are doing something physically, like tensing up. Looking into the truthful eyes of Mr. Oldman [as the doctor] helped. 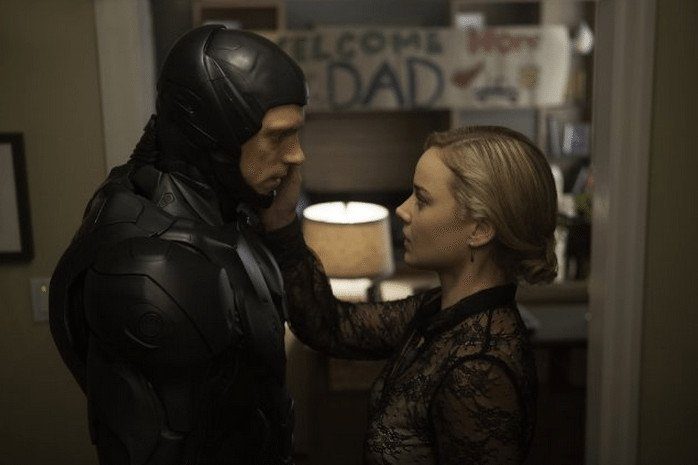 Q:  Michael, Joel – what about the limitations of working with most of your face covered.

Keaton:  I did mention it to him about acting. Often talking about acting gets self-involved, but this is casting so good you feel him on every level throughout the movie. Joel’s job is very difficult because people don’t know how hard it is. Your unnatural instinct is to say let’s face it. What he did is show the transition without a big black suit. I let the Batman suit go to work for me, it’s kind of claustrophobic, and we didn’t even know if it would work until we were hours away from shooting. The suit was just a way in to the character for me. You couldn’t get out of the first suit, and I had a literal panic attack. The suit in the second movie was much more comfortable. It’s odd, but something always comes up in your life that helps you “get it.”

Q:  Joel, did you have to develop a physical regimen to get ready for all the stunts playing Robocop, and were you given any souvenirs from the movie to take home?

Kinnaman:  I did take guns home in frames, so that was nice. I trained with Swedish special forces for three weeks [Kinnaman is Swedish] – guys I’d trained with before for other projects – and also a month with LA SWAT team.

Q:  Gary, you’re like mad scientist with a conscience. How’d you develop that?

Gary Oldman:  It’s unusual because it doesn’t really start with patient/doctor, father/son, and in friends. I think that’s mainly a seed of the idea in the original, it is like Frankenstein idea of man tinkering with God’s presence. It was a terrific script, and the key to a great movie is great writing.